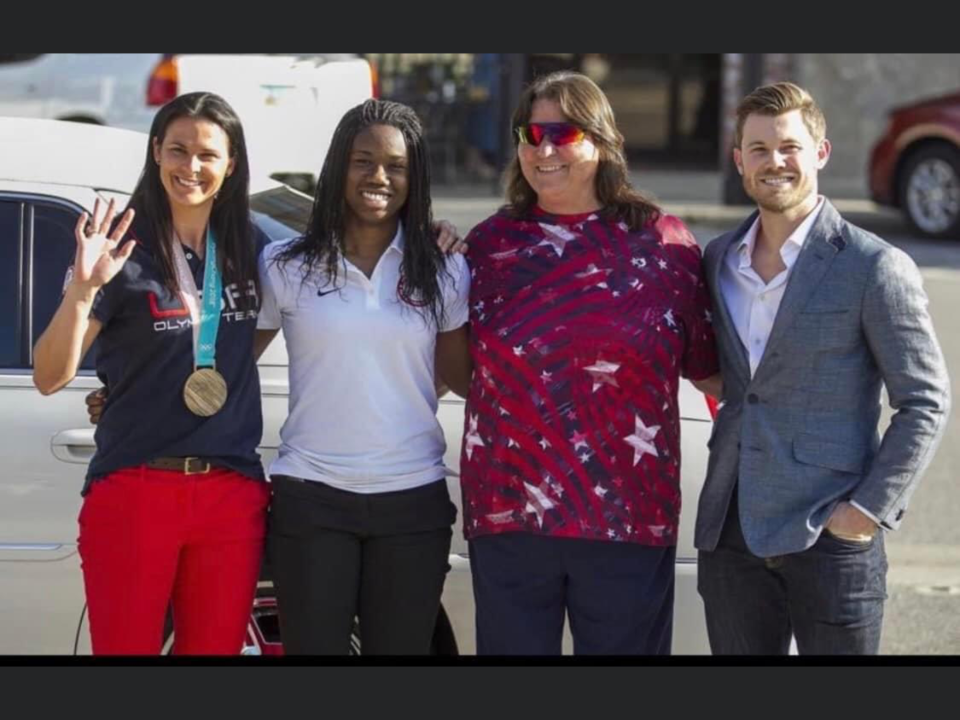 In sun-kissed Central Florida, surrounded by acres of rolling hills and sprawling horse farms, sits a hidden gem of a city with an unlikely claim to fame.

​​Ocala has become an unexpected speed skating epicenter even though the nearest ice rink is more than an hour’s drive away.

For more than three decades, Renee Hildebrand has been training Ocala kids to become inline speed skating world champions. Three of her most accomplished former pupils on wheels have since transitioned to the ice, drawn by the challenge of mastering a new sport and the chance to chase Olympic glory.

Hildebrand’s Ocala’s triumvirate could each bring home medals from Beijing if they skate to their potential. Erin Jackson has won four of this season’s eight World Cup races in the 500 meters. Brittany Bowe is the world’s top-ranked 1,000-meter skater. And Joey Mantia is ranked No. 1 in the men’s 1,500 meters and is a three-time world champion in the mass start.

There was a time when Hildebrand thought Mantia, Bowe and Jackson would capture Olympic gold on inline skates. She still has a roller skating bumper sticker from 1980 that reads, “Next stop, the Olympics.” Roller skating, of course, never made the Games. But in a way that makes Hildebrand, 59, even prouder that some of her best skaters still did.

“They had to learn a whole new sport,” Hildebrand told Yahoo Sports. “As similar as it looks, it’s really not that similar. It takes a lot of training to break the muscle memory they already had and develop new muscle memory.”

Jackson nearly squandered her place in Beijing because she slipped in the 500 at last month’s Olympic Trials and could salvage only third place in a race she had been heavily favored to win. Only the top two skaters qualified for the Olympics, but Bowe gave up her own spot in the 500 so her close friend and fellow Ocala native could replace her and USA Speedskating could send its strongest possible team.

While she didn’t formally announce her decision until the final day of Trials, Bowe made a point to text Hildebrand the night of Jackson’s costly slip to let her know what she planned to do. “Just know that you can sleep tonight knowing that Erin will be going to Beijing if I have anything to do with it,” Bowe wrote.

“That meant more to me than anything else that’s ever happened in my coaching career,” Hildebrand said. “I try to raise my skaters in a culture of giving back to the team and supporting each other, but I feel like Brittany has taken it to the next level.”

How did Hildebrand manage to turn an aging Florida roller rink into a launching pad for future Winter Olympians? Or become known as one of the country’s finest developmental ice coaches despite only working with inline skaters? The story begins back when Hildebrand was zipping around on quad skates during the original roller skating boom of the late 1970s.

In those days, Hildebrand was a teenage “rink rat” with a passion for skating. Most Fridays and Saturdays, she’d show up to her local roller rink in Charleston, South Carolina, when the doors opened and she’d stay until closing time.

Hildebrand was 16 when she bought her first pair of inline speed skates and began competing for a youth team in her hometown. While she herself had only modest success, she discovered that she enjoyed helping teach her team’s younger kids as much as she liked racing herself.

That experience cemented Hildebrand’s desire to pursue coaching. She majored in athletic training at Central Florida and went to physical therapy school at the University of Florida because she thought it would make her a better coach. Then, in 1986, she began guiding her own team at a small rink in Brooksville, Florida, while also holding down a 9-to-5 job as a physical therapist.

Determined to keep getting better as a coach and to mold her athletes into national champions, Hildebrand constantly sought new drills and innovative techniques. She studied a book written by legendary speed skater Eric Heiden’s longtime coach and personally reached out to some of the sport’s other gurus.

Virgil and Sue Dooley, a husband-and-wife duo who had already developed several world-class in-line speed skaters, coached alongside Hildebrand in the late 1980s. They both remember Hildebrand peppering them with questions about how to help athletes build a foundation of power, strength and endurance as the season approached and how to get them to peak before big races.

“Boy, did she want to learn!” Virgil Dooley told Yahoo Sports. “When I would make a suggestion or run a practice for her my way, she’d ask smart questions and soak in what I was saying. She saw the progress her skaters were making, and she believed in my approach.”

A niche sport like speed skating doesn’t typically attract many top young athletes, but Hildebrand worked tirelessly to identify talent. After moving to the Ocala area in the early 1990s, Hildebrand would scout roller rinks during open skate sessions or sidle up to parents on the final weekend of youth soccer season, never letting it bother her that her rejection rate was around 10-to-1.

Hildebrand spotted Bowe as an 8-year-old skating circles around her peers at a classmate’s birthday party. It was an impressive enough display that Hildebrand approached Mike and Debbie Bowe during the party and invited their daughter to stay for speed practice afterward.

Hildebrand stumbled across Mantia while watching her daughter’s gymnastics class. She urged him to try speed skating with her team after marveling at him “running up that rope like nobody’s business.” The sales pitch turned out to be easier than Hildebrand expected because Mantia already loved to skate. He’d show up to public sessions at local rinks and whip around so fast that he’d get kicked off the floor.

Mantia and Bowe were powerful, driven skaters who soaked up Hildebrand’s technical advice and thrived in the competitive practice environment she created.

In his first season, Mantia captured his first junior national championship. By 17, his final year as a junior, Mantia nearly swept all 12 races at the World Championships, winning 10 golds and settling for silver in the other two.

Bowe became equally dominant despite splitting time between skating, soccer and basketball. She’d show up to speed practice in her basketball shorts, tired and sweaty, and still summon the energy to outskate her peers.

“I was 8 years old when I started, and I loved it,” Bowe said. “Did I know where it was going to lead me? Absolutely not. But I knew that I loved to go fast, I loved to train hard and I loved the intensity and competitiveness in that rink that Renee brought.”

Mantia and Bowe were already accumulating world championship medals in far-flung countries by the time Hildebrand tried to coax Jackson into trying speed skating. It wasn’t such an easy sales pitch because Jackson’s mother had already enrolled her 7-year-old daughter in artistic skating and envisioned her as a figure skater on wheels.

“I’d come to the rink and she’d be flying around on her little art skates,” Hildebrand remembered. “Her teacher would be like, ‘Slow down, you’ve got to do your jump!’ She’d be like, ‘I just want to go fast!’”

Hildebrand sought out Jackson at the rink and told her, “You need to do speed skating.” When Jackson told Hildebrand to talk to her mom, Hildebrand did just that when they ran into each other at a Waffle House soon afterward.

After a couple conversations, Rita relented and brought her daughter to speed skating practice. Within a few months, Jackson was pushing her older teammates and displaying world-class potential as a sprinter.

The biggest challenge that Hildebrand faced while coaching Jackson was that schoolwork was always far more of a priority for her than skating. While Jackson trained intensely and became a world champion by age 15, she’d sometimes go a couple weeks without showing up to practice when school assignments piled up, leaving Hildebrand wondering if she was ever coming back.

As high school graduation approached, Jackson faced a big decision: She could either pursue an engineering degree at the University of Florida or move to Salt Lake City to be part of USA Speedskating’s transition program. Even Jackson’s teachers were telling her, “Go try this sport. You’re not going to be young forever.”

Jackson didn’t listen. Not until a 2016 trip to the Netherlands did she tentatively step onto the ice for the first time.

By then, Mantia and Bowe had been training on ice for years and had begun to find their footing. Mantia traded his wheels for blades in 2011, content with his 28 inline world championships and eager to see if he could become that good on ice. Bowe had done the same the previous year, abandoning her plans to play professional basketball overseas after watching several former inline peers compete at the 2010 Winter Olympics in Vancouver.

“Seeing them walking in the Opening Ceremonies and winning medals, I just had a change of heart,” Bowe said. “At that point, I knew that after I graduated, I was going to hang up my basketball shoes and move to Salt Lake City to become an Olympic speed skater.”

While Hildebrand wishes that Mantia, Bowe and Jackson didn’t have to leave inline skating to pursue their Olympic dreams, their success opened new doors for her. Speed skaters from as far as Europe, Australia and South America have descended upon Ocala to spend a few weeks training with her. And Hildebrand has also traveled to Belgium, Colombia and other countries to hold clinics or work with national team skaters.

As Mantia, Bowe and Jackson transitioned to a new skating surface, they each kept in touch with their longtime inline coach. They vented to Hildebrand when they looked like Bambi on ice and celebrated with her as they learned to generate power from their hips instead of their legs and to sit in a lower squat to combat wind resistance.

Going from being elite on one surface to a beginner on another was mentally difficult for the Ocala trio, but the lessons they learned from Hildebrand helped them persevere. In their heads, they could hear Hildebrand telling them, “Only perfect practice makes perfect.” Or reminding them to treat every workout and drill like a trophy was at stake.

“Our success really speaks to Renee and what an amazing coach she is,” Jackson said. “It goes beyond getting us prepared physically. She was a really amazing motivator. She had a way of getting her athletes to believe in themselves and believe they could do anything they set their minds to.”

Even reach the Winter Olympics coming from hot, muggy Florida and a city with no ice rink.