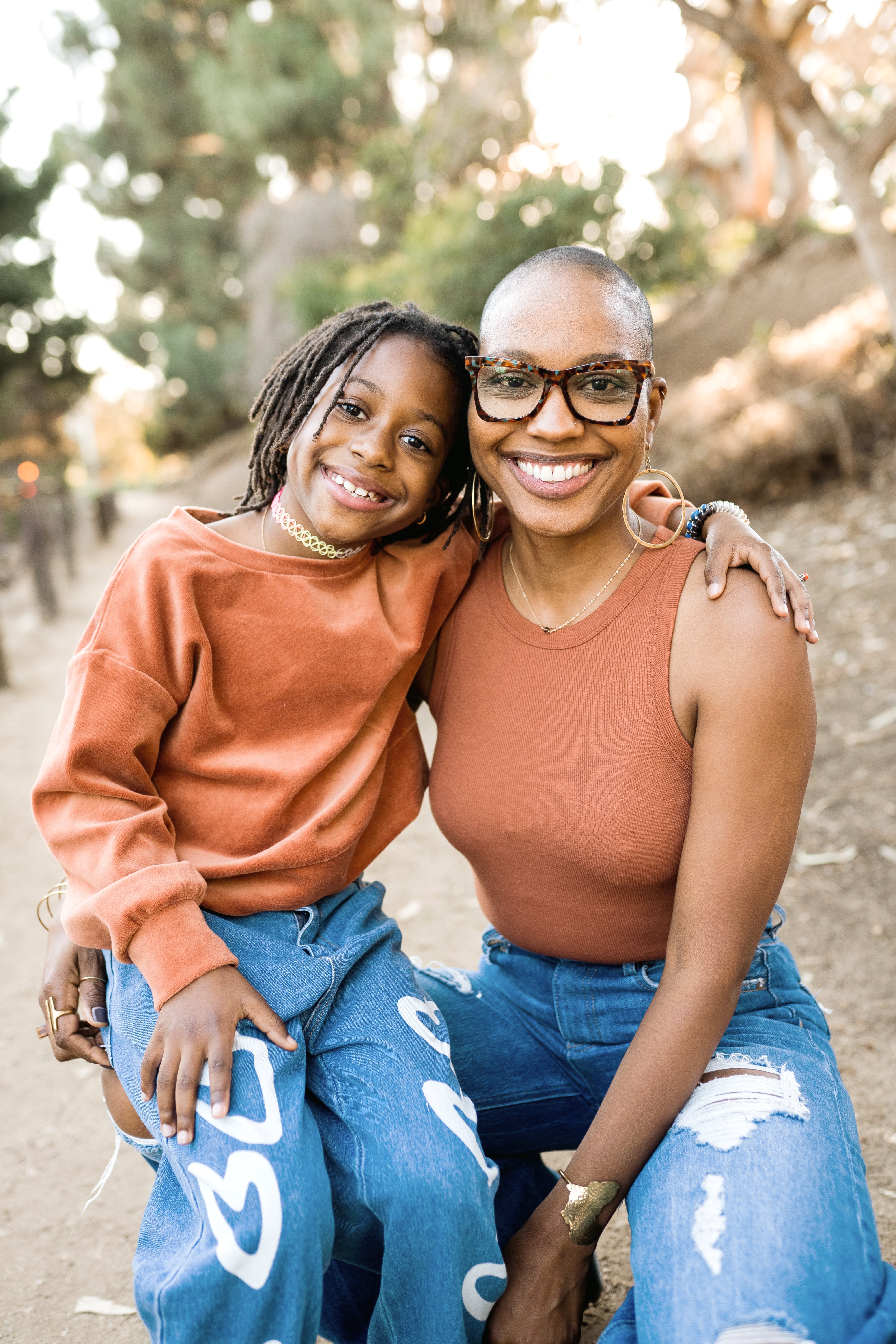 Kendal Troutman does not come from a skating background. In fact , the owner of Mahogany Soul and founder and executive director of ThruGUIDANCE Ministries only went ice skating once when she was growing up in South-Central Los Angeles.

Now, skating’s become an integral part of her life as she uses it to create community and opportunity.

“Kendal is an amazing person, ” said Jennifer Pope, senior vice president of local community and hockey development for the Los Angeles Kings. “Her passion to diversify kids on the ice for both figure skating and hockey is unmatched and we’re fortunate to call her a friend and partner. ”

Troutman’s journey to skating has been inspired by her young daughter, Amai.

“I didn’t have any interest in the [Winter] Olympics, and we weren’t a household that watched stuff like that, ” Troutman said. “So, when I became a mom, I was intentional about introducing Amai to more experiences than I had. ”

Troutman introduced then 4-year-old Amai to the Olympic Winter Games PyeongChang 2018 on TV. When Amai watched figure skating, she wanted to try it. However , Troutman didn’t know how to start her daughter in the sport. After some searching, the girl found learn to skate lessons at the Toyota Sports Performance Center in Los Angeles.

“We did two sessions of lessons, and I was still a little on the fence about it, ” Troutman said. “Amai, though, loved it, and I couldn’t get her off the ice. ”

One day, Troutman and Amai were at the rink for training and saw a banner for synchronized skating. Curious, Troutman went to the information table to learn more. That was the moment her perspective on the sport soured.

“I asked for an application and the coach said, ‘This is really expensive, ’” Troutman said. “I was like, ‘OK. I still want an application. ’”

Troutman said the lady ran into other entry barriers, such as not knowing that a certain type of boot was required for synchronized skating after she had already purchased a less-expensive model. More disheartening, she was told her daughter’s tights couldn’t match her Black skin color and needed to be the same as her White peers.

The cost to be on the team became an issue and, moreover, the feeling of being dismissed as a Black family caused Troutman to reconsider her daughter’s involvement.

Dismayed, Troutman shared her story with her 150 followers on Instagram, most of whom are close friends and family. She did not expect the video to be shared with coaches and skaters across the world.

Within several days, the video had the attention of officials with the rink and the Los Angeles Kings. They asked how they could help. Two months later, 24 Degrees of Color was created in partnership with the Kings and Toyota Sports Overall performance Center. By February 2021, 24 Degrees of Color has been fully integrated into the learn to skate program at the Center.

According to the 24 Degrees of Color webpage, which is listed as a program under Troutman’s ThruGUIDANCE international nonprofit organization: “[The] goal is to diversify ice skating and ice hockey in L. A. County by making these sports more accessible financially, ensuring diverse representation at the rink, introducing young people to recreational ice sports and providing resources for them to compete, if interested. ”

“The kids get to be in the learn to skate program and have the same access and resources as any other skater, ” said Troutman, who is a new member of U. S. Figure Skating’s DEI Task Force. “I hold skate drives so that people can donate skates, costumes, gear plus clothes . ”

Currently, Troutman has 67 kids enrolled in 24 Degrees of Color, which is overcapacity and has a waitlist of 15 to 30. Later this year, the program will be expanding to the LA Nobleman Iceland at Paramount and will hopefully be able to enroll another 65 kids at the partner rink.

The program has been a smashing success, according to parents of enrolled boarders.

“I never imagined that my son would be able to participate in any ice sports, ” stated Emma Garcia, whose son and niece are in the program. “Thanks to ThruGuidance/24 Degrees of Color, my son is learning how to play hockey and physique skate. The first time he saw young hockey players he was mesmerized. He mentioned, ‘Mommy, can I do that? ’ He was excited by the speed and maneuvers of the hockey players and loved the artistic movements associated with figure skaters.

“When I ask him to choose between hockey and figure skating, he answered, ‘Why mom? I love both. ’”

Vanessa Rosales, a parent of Logan and Presley Rosales, found the 24 Examples of Color program a little more than a year ago as she was looking for public skate times at a local rink.

“As someone who grew up figure skating, I was looking to introduce the ice to my then 7-year-old son plus 4-year-old daughter, ” Rosales said. “Fast forward to a little over a year later and I now have my child learning to play hockey and each my son and daughter will be taking part in a figure skating camp over the summer. None of this would be possible without the tireless work and efforts of Kendal and the girl amazing team. ”

Troutman thought it was going to be a slow build with the Hispanic and Black communities because ice sports are generally not available or promoted where they live.

“When we initially launched, we put up a flyer around the Toyota Sports website, but we had to take it down because it was so popular, ” Troutman said.

Through word-of-mouth, the number of skaters and families interested in 24 Degrees of Color has exceeded Troutman’s expectations. Unfortunately, due to the limits on funding and resources, Troutman is still struggling to help her skaters advance beyond the introductory phase of hockey and figure skating.

Most of 24 Degrees’ money goes toward training camps, holiday shows and services at the rink. Despite having equipment and gear, hockey players enrolled in lessons through 24 Degrees have never played a game or participated in a league. Meanwhile, some of the number skaters have been able to take part in private lessons or in local competitions. The cost, however , to participate on a synchronized skating team remains prohibitive.

With that, Troutman continues using her experience in nonprofit management to raise money, find volunteers plus make the program as cost-effective as possible. She’s also educating parents and families on how to help their kids with the snow sports journey.

“We do very thorough orientations. We onboard parents by educating them on what to buy, how to buy and how to take care of skates, ” Troutman said. “We tell them what to expect at the rink, how the system works and the importance of showing up for sessions. I really want the families to be committed to this program. ”

Toyota Sports Performance Center General Manager Chance Berman has witnessed how this program offers evolved so quickly and impacted dozens of families inside L. A. County.

“I didn’t know what to expect, but it’s been impressive to see how motivated and driven Kendal is to make this program what it is today, ” Berman stated. “She’s been an absolute asset and opened doors with regard to so many more kids to try out a sport that they previously didn’t have access to. ”

“When we started our We Are All Kings learn to skate program, she worked with us to make sure we had kids from all different communities and backgrounds out on the ice, ” Pope said. “We wanted to expose them to the sport that we all love and after a few weeks, the improvement was amazing.

“We’ve now moved these kids through learn to skate, to Hockey Basics and then Little Kings, where they were fitted from head-to-toe gear. We can’t wait to continue to watch them as their hockey journey continues, all the while bringing new children into the program this fall. ”

While Troutman feels she does not have all the solutions for the future associated with 24 Degrees of Color, she takes it all in stride. The retention rate regarding skaters is approximately 95 percent, and the communities’ drive to continue their passion intended for skating fuels her. Through all of her efforts (and the efforts of those seeking to contribute), Troutman hopes the girl can make ice skating the accessible, inclusive sport she sought at the start of Amai’s journey.

“I did not go out to create a diversity ice skating dresses for sale program, but it was a beautiful gift that happened, ” she said.

To make a donation to the 24 Degrees of Color program, visit www.thruguidance.org or mail a check in order to its mailing  address at 4859 W Slauson Ave #237 LA, CA 90056. ThruGUIDANCE Ministries is a 501c3 nonprofit  organization.