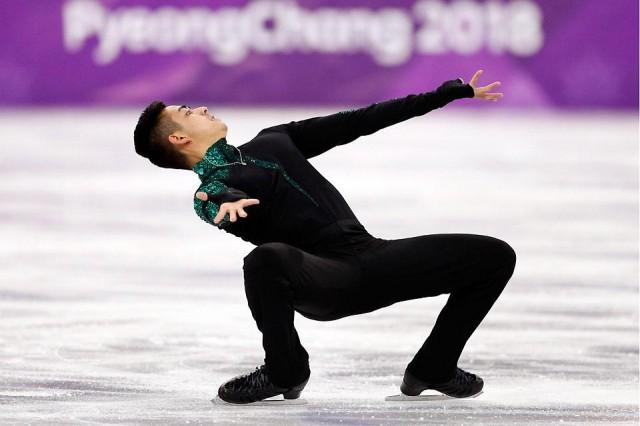 Three figure skaters are vying to earn the right to represent the Philippines at Nebelhorn Trophy, the last qualifying event for the 2022 Winter Olympics in Beijing, China.

The Philippine Skating Union announced that Michael Martinez, Christopher Caluza, and Edrian Celestino will be assessed to determine who will get the country’s lone slot at Nebelhorn, which will be held in Oberstdorf, Germany on September 22 to 25.

In a Facebook post, the PhSU said it will host an Olympic Qualifier Evaluation this month. A similar event will also be conducted for the ladies.

Seven Olympic slots are up for grabs at Nebelhorn, with 23 slots already confirmed at the 2021 World Championships. Michael Martinez of the Philippines performs in Men Single Skating short program competition at the Gangneung Ice Arena in South Korea during the Pyeongchang 2018 Winter Olympics on Friday, February 16, 2018. Martinez finished the figure skating short program with a total score of 55.56. Reuters/John Sibley

Martinez, 24, is already a veteran of two Winter Games. He advanced to the free skate in his debut at the 2014 Olympics in Sochi, Russia and finished 28th in the short program at the 2018 Olympics in Pyeongchang, South Korea.

He is the first figure skater from Southeast Asia to qualify for the Winter Olympics and also participated in the 2012 Winter Youth Olympic Games.

Martinez went into hiatus after the 2018 Olympics, but he is a proven skater with three world championships appearances from 2015 to 2017, two gold medals in the Triglav Trophy, and a gold medal at the Asian Open.

He was the national champion in 2017 and also bagged the silver medal at the Southeast Asian Games that same year.

Back in March, Martinez set up a crowdfunding campaign for his journey to the 2022 Winter Games. In an interview with GMA News Online, the two-time Olympian said the crowdfunding was to help him raise funds for training expenses.

“I would really hope that I would be chosen to represent our country at the Nebelhorn Trophy,” said Martinez. “Right now my focus is to do my best in training, to be better, and have a great performance and results in my next competitions.”

One last hurrah for Christopher Caluza Caluza, 31, is a three-time national champion and also has three world championships appearances from 2012 to 2014. He won the gold medal at the 2019 EduSport Trophy and claimed the silver medal at the 2019 SEA Games.

He previously participated at the United States National Championships in 2011, but he started representing the Philippines one year later. He is a veteran of the Four Continents Championships, the International Skating Union (ISU) Challenger Series, and several international competitions.

Caluza stopped competing after the 2014 season, but he returned to the rink in 2018. Earlier this year, he launched a crowd-funding campaign to help finance his preparation for the Olympic qualifiers.

In an Instagram post in February, he said it’s most likely his final season in competitive skating—one last chance to pursue his childhood dream of skating on Olympic ice.

“To be honest, I’m tired—like physically, financially, mentally—but I wanted to do this one more time because last year, even though we didn’t compete, I felt well rested,” Caluza told GMA News Online. “I hope that we all do a good job this year because it’s a good year to come back from a crazy year.” Celestino, 23, is the reigning national champion after capturing the title in 2019. He competed in three ISU Challenger Series tournaments during the same season and capped the year with a fourth place finish at the SEA Games.

He represented Canada in international competitions until 2018, but he switched federations and began carrying the Philippine flag in 2019.

“When I used to skate for Canada before making the switch, I just thought I would be, I guess stuck, in that level,” he said in an interview with select media. “So having the chance to represent the Philippines and maybe potentially going there [to the Olympics] is less of the dream, more of an ambition or more of a goal that I’m working towards.”

Celestino and Caluza appeared in the Four Continents Championships in 2020, but further tournaments were postponed due to the coronavirus pandemic.