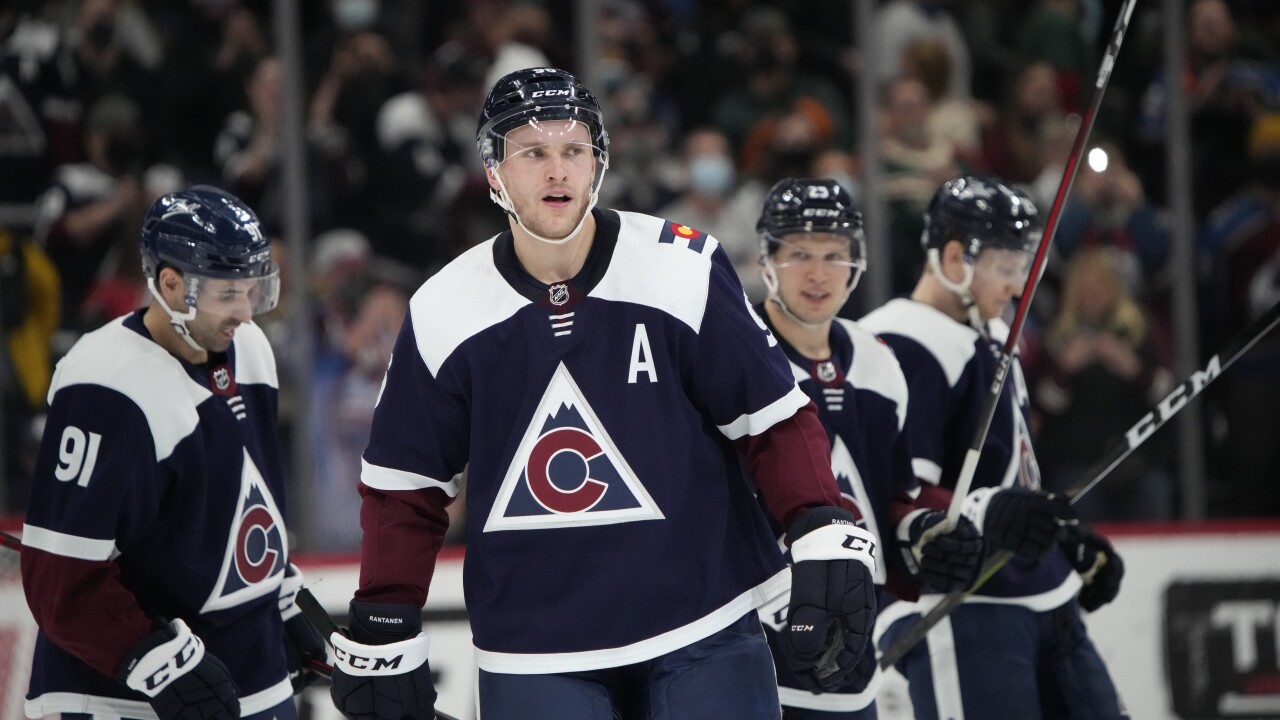 DENVER — The Colorado Avalanche’s jerseys have remained fairly consistent over their 27 years as a team compared to some others – with some tweaks along the way. But there have been some interesting alternate jerseys that some love and others love to hate.

With the Avalanche back in the Stanley Cup Final for the first time since their 2001 victory, we’re taking a look back at the Avs’ sweaters and uniforms over the years.

We also talked with Todd Radom, a sports logo designer who has written multiple books on uniforms over the years, who says the 2015 navy blue alternates and 2020 Air Force Academy Stadium sweaters are his favorites. More from him and Denver7’s Jason Gruenauer below.

A look back at the Colorado Avalanche sweaters over the years

Which ones are your favorites and which are the worst? Shoot us an email by clicking here.

The Avalanche moved away from the black helmets and pants to steel blue in 2021 and added white stripes to their alternate uniform pants. This past season, they changed the names and numbers on the back of the white away jerseys from black to burgundy and blue. The navy alternate jerseys remain.

The Reverse Retro jerseys harken back to the Avalanche’s time as the Quebec Nordiques, utilizing the logo and the fleurs de lis across the bottom and on the shoulders. But they take Colorado’s color schemes to modernize the look.

The Avs wore special sweaters for the 2020 Stadium Series game against the Los Angeles Kings on Feb. 15, 2020, at the U.S. Air Force Academy in Colorado Springs. Some people love them, some people hate them. But they didn’t bring good luck, as the Avs lost 3-1.

There are several tweaks the Avalanche’s home and away sweaters underwent over this 10-year period. The NHL moved to Reebok uniforms in 2007 and the Avs moved the stripes from the bottom of their jerseys to the ribs and sides.

In 2015, they moved away from the Howler foot patch on their shoulders and replaced it with a “C” patch from the state flag – an homage to the former NHL team in Denver, the Colorado Rockies.

The Avalanche played in their first Stadium Series game on Feb. 27, 2016, against the Detroit Red Wings at Coors Field. Some of the aspects of the navy blue alternates went into the logo design.

The Avs introduced a blue alternate from 2009 to 2015 which plays off the burgundy alternates the team wore from 2001 to 2007, with the diagonal nameplate “Colorado” across the front, stripes on the elbows, burgundy on the sleeves as well as an Avalanche logo patch.

The Avalanche home and away jerseys change very little from the 1999-2001 versions, but they add a burgundy alternate jersey after winning the Stanley Cup in 2001 that has “Colorado” diagonal across the front, with black, white and blue striping and Avalanche logo patches on the shoulders.

The overall patterns for the Avalanche jerseys change little from the 1997-99 version, but the burgundy gets considerably darker than earlier iterations.

There are few changes from the 1996-97 sweaters – with the numbers getting a little smaller to fit cleanly on the back between the blue and burgundy lines, and thicker outlines around the numbers and nameplates on the back.

In their second year and fresh off a Stanley Cup victory, the Avalanche logo got bigger and was tilted slightly to the left, and the nameplate font on the back of the sweaters changed slightly.

The Avalanche moved to Denver from Quebec City, Quebec, Canada, where they were the Nordiques, where they were white, blue and red. The Avalanche end up picking burgundy, steel blue, black and silver and choose an “A” logo shaped like a mountain, with a puck sweeping down along with the snow. The choice turns out to be a winner, as the Avs win the Stanley Cup in their first season and eventually move back to this original design.

Each game of the 2022 Stanley Cup Final airs on Denver7, with pregame and postgame coverage from the Denver7 team. Click here for more Stanley Cup coverage.