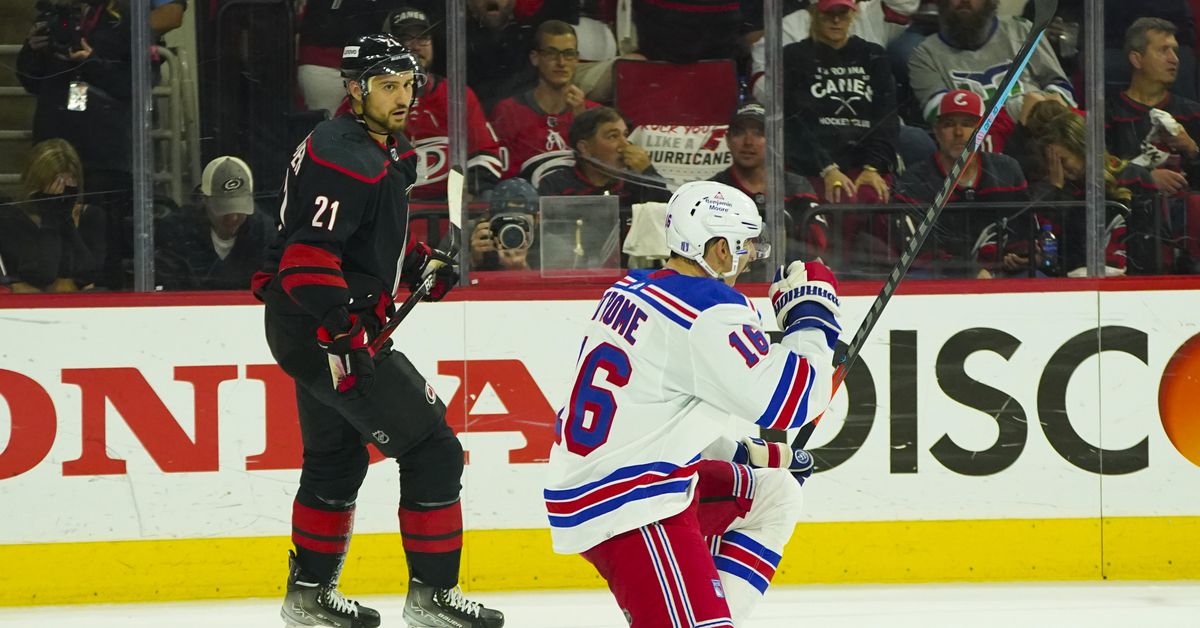 Teams with Stanley Cup aspirations work for 82 regular-season games to earn the right to home-ice advantage in the postseason.

The Carolina Hurricanes worked. And they earned that right.

When they reaped the benefits of all that work in Monday night’s game seven, they turned in one of the biggest no-shows in the Rod Brind’Amour head-coaching era. As a result, they saw their season end, on home ice, at the hands of a team that they beat out for the Metropolitan Division crown.

Unlike in recent seasons, these Hurricanes weren’t just happy to be there – or at least they shouldn’t have been. This team had its sights set on the Stanley Cup, and they stood a very good chance of accomplishing that goal based on what we saw during that regular season.

Despite their expectations being higher, the heights they reached – or lack thereof – were precisely the same as last season.

Moves that were touted as pushing the team forward and making them better for these situations last offseason proved to be all for not. Another year of experience for a young core of players didn’t bear fruit. Some of the very same things that plagued them in recent years plagued them yet again.

Here we are again.

For the last time this season, let’s talk about last night.

After giving up an early power-play goal to the Rangers, the Hurricanes had an opportunity to put their foot down and regain control of the game with their own power-play at the 4:18 mark of the first period.

They came up empty, not even flirting with finding the back of the net across two minutes.

Less than two minutes later, Jacob Trouba floored Carolina rookie Seth Jarvis with an open-ice hit that removed Jarvis from the game. Then, as he shuffled his way to the bench, the Canes got whistled for too many men on the ice.

The Rangers scored again on a deflection from a wide-open Chris Kreider on that man advantage.

Thirteen seconds later, the Hurricanes were handed another opportunity on the power play. But, again, they came up with no answer for the Rangers and Vezina-favorite Igor Shesterkin.

It was the Rangers, not the Hurricanes, who showed up and delivered the big punches that set the tone for the rest of the game. Carolina’s power play went completely dormant in a must-win game, which is unacceptable on its own.

Add to that the fact that they gave up two to the Rangers in the first ten minutes, and you have a recipe for collapse.

You can wave around the two garbage-time goals that, on the scoresheet, nullified those early tallies, but the reality is that the Hurricanes lost game seven less than ten minutes into it.

They were undisciplined, opening the door for New York’s best players to walk into their building and put a stranglehold on the game. When they were gifted the opportunity to respond, Carolina’s best players were still in the parking lot.

The Hurricanes were a deep team with offense coming from all angles during the regular season, but they were led by a well-established group of guys you could rely on in big moments. That changes in the postseason when you’re left with only the good teams in the league, all of which are game-planning to shutdown your best players.

That puts more pressure on a team’s depth to score, but more than that, it puts pressure on your top players to beat the other team’s best players.

Carolina’s best players didn’t do that against the Rangers.

After getting out to a 2-0 series lead, Carolina’s top-five scorers from the regular season (Sebastian Aho, Andrei Svechnikov, Teuvo Teravainen, Vincent Trocheck, and Tony DeAngelo) combined for all of eight points between the start of game three and the midway point of the third period of a game seven they were already trailing by a score of 4-0 en route to losing four of five games.

Eight total points in just under five games from five players who need to have an impact on a playoff series.

Shesterkin was nothing short of outstanding throughout the series, but this disappearance went beyond getting robbed by a great goalie. The power play was an unabashed trainwreck for most of the series, a problem that dates back a couple of months.

The fact that we’re sitting here after yet another postseason that ended, at least in large part, because of a power play that failed to convert or even sustain consistent pressure is a remarkably tough pill to swallow. They swapped out first-unit power-play quarterbacks in hopes of finding an answer, and they didn’t find one. So what is the proposed solution now?

It would be one thing if they were consistently getting chances and not scoring, but Carolina’s top players routinely conducted a snoozefest on the power play. When the penalty kill is clicking, you can get away with it, but when they happen to slip up, you’re just going to lose more games than you win in the postseason and there’s no way around it.

Now, let’s go ahead and talk about another obvious factor in these playoffs – not having Frederik Andersen. The Hurricanes were forced to ride it out with Raanta, who at the age of 33 played more frequently than he had at any point in his NHL career.

In fairness, it’s hard to imagine Andersen playing all that much better than Raanta did. In a 16-day stretch from game five in the first round against Boston to game five of the second round against New York, he started all eight games for the Hurricanes, won five of them, and posted a .932 save percentage.

He ran out of steam in game six at Madison Square Garden as the Hurricanes laid an egg on the road, and then he was forced to leave game seven with a lower-body injury that, according to Rod Brind’Amour, likely would have held him out for an extended period of time.

Of course, losing your starter plays a role in all of this, but I’d contest that they would have lost games six and seven regardless of who was in the net – be it Andersen, Raanta, or third-string rookie Pyotr Kochetkov.

When Raanta did get hurt in game seven, Kochetkov was greeted with back-to-back two-on-one rushes. The rookie bailed them out on the first one, but in the blink of an eye, the Rangers were flying in again and they didn’t waste their opportunity to extend the lead to three goals.

The series was decided by much more than just who was tending goal for the Hurricanes – or the Rangers, for that matter. Unless you’re playing in the battle of Alberta, the teams you play at this point in the postseason will probably have really good goalies. At some point, you have to find a way to beat an elite goalie if you want to win a Stanley Cup.

If they couldn’t beat Shesterkin, they almost certainly wouldn’t have beaten Andrei Vasilevskiy.

What it comes down to is that, when it mattered the most, one team seized their opportunities and the other team failed to capitalize when it was their turn at the plate. You would have expected the successful team to be the one on home ice in their fourth straight playoff run and not the one who, by and large, was going through it for the first time.

As For What Happens Next…

I kicked this off by alluding to how this team isn’t in the same position as the Canes teams of old.

In 2019, 2020, and 2021, the Hurricanes were young, up-and-coming teams that got knocked out of the playoffs by established powerhouses in the Boston Bruins and Tampa Bay Lightning. There was a sense of “happy to be here.”

That is no longer the case.

The Hurricanes weren’t the underdogs. They were the favorites, and they got upset.

You could write the last three exits off as learning and growing experiences. I’m not sure what the Hurricanes could possibly have learned from this exit that they didn’t already know.

There is room to appreciate the season that they had and acknowledge how good they were, but we’ve reached the point now where there must be a focus put on the things that this team didn’t do and, more importantly, what went wrong with the players on the ice, coaches on the bench, and executives looking down from above.

Of course, that doesn’t mean firing your coach or general manager. It means that some tougher self-reflection needs to be done from top to bottom. Tough moments like this are almost always a part of the process, but that doesn’t mean complacency can kick in.

Substantial change will occur between now and the opening puck drop of the 2022-23 season. The days immediately following heartbreak are not the ones wherein you should be making big decisions, though. Time will pass, and the time for that will come. The Hurricanes have ten expiring contracts that need to be decided on this offseason. Among those ten include Nino Niederreiter, Vincent Trocheck, Martin Necas, Max Domi, Tony DeAngelo, and Ethan Bear.

For now, we’re left sitting in the aftermath of a season that seemed destined for something much more significant than a quiet second-round exit.