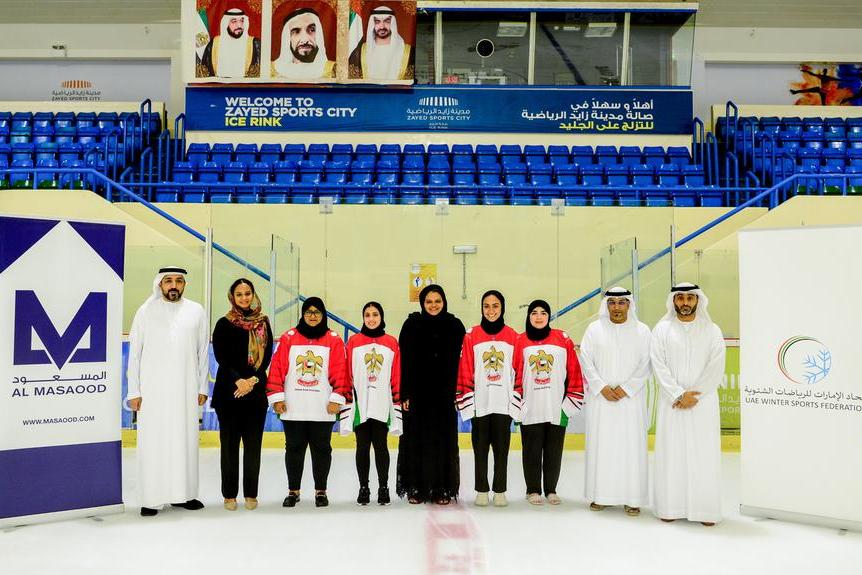 Abu Dhabi – Al Masaood Group signed an agreement with the UAE Winter Sports Federation to support the National Women’s Ice Hockey Team as its ‘Gold Sponsor. ’ Al Masaood’s move aligns with its approach to supporting the sports industry in the UAE, as part of its social and national responsibilities, in light of the accelerating growth of ice sports within the country.

Recently, ice sporting events in the UAE become increasingly popular, as the UAE boasts over five ice rinks, a championship-winning national team, and more than 800 registered players around the country, including 80 women players. As the sport has grown in the Gulf region, the UAE national team has become a prime regional player; winning the Arab Cup, the IIHF Challenge Mug of Asia, and the Gulf Ice Hockey Championships.

Ahmed Salmeen, Chief Executive, Government Affairs at Ing Masaood Group, said: “Our collaboration with the UAE Snowboarding Federation is a part of our drive to support community-focused initiatives and events. We are fascinated by the growth of snow sporting events in the UAE plus pleased to see a significant advancement in the role of UAE women in sports. This certainly reinforces our overarching goal of consolidating Abu Dhabi’s status as a vibrant, global hub for international sporting activities for people from all walks of life. ”

Ice Handbags in the United Arab Emirates is governed by the U. A. E. Ice Sports Federation, and the UAE has been a member of the International Ice Hockey Federation since 2001. In 2017, the UAE proudly debuted the Nationwide Women’s Ice Hockey Group.

Additionally , the particular UAE National Women’s Snow Hockey Team has set many standards in their career and received numerous accolades, keeping the country’s reputation high. The UAE National Women’s Ice Hockey Team was guests of honour at the game between the Washington Capitals and Columbus Blue Jackets held at the Capital One Arena. Fatima ‘s Ali, the renowned gamer, was invited by the Capitals to the same arena, one year prior to the ceremony.

“It is an honour for us to support the National Women’s Ice Hockey Team as we continue to advocate for Emirati women’s potential, revealing their creativity, and giving them the opportunity to prove themselves and move forward towards a promising sporting future. Through our joint efforts, we look forward to making a tangible, and positive impact on Abu Dhabi’s women’s sporting community, ” Salmeen added.

Hamel Al Qubaisi, Vice President of the UAE Winter Sports Federation, said: “we highly value this partnership with Al Masaood Group to sponsor the UAE’s women’s national ice hockey team, for the season 2022 – 2023. This sponsorship is part of the private sector’s strategy to promote national athletic teams, with Al Masaood taking the lead in the field. Glaciers Hockey is part of the many winter sports that attracts the interest of a significant category of the community, acquiring a wide fan base from all nationalities. We are thus delighted to collaborate with Al Masaood, which has become a key partner in promoting women’s accomplishments in this sport, both locally and internationally.

The UAE has long supported hockey, as seen by the formation from the UAE National Women’s Ice Hockey Team. The group have participated in the Asian Women’s Ice Hockey Glass in 2013, 2017, 2018, and 2019, where they placed second in the last two editions, becoming the first Arab team to ever participate in the Asian Ice Dance shoes Cup. In its role as a Gold Sponsor, Al Masaood looks

forward to supporting the team and reflecting upon the pillars of its Corporate Social Responsibility (CSR) programme, which include the development of sports and youth.

Founded in 1970, Al Masaood Group is a leading family-owned business conglomerate in Abu Dhabi, offering holistic and innovative solutions to its clients and customers across various sectors. Through its highly diverse companies and businesses, the Group is supporting the particular positioning of the UAE like a global business hub while serving the needs of its local community through wide ranging Corporate Social Responsibility (CSR) initiatives. Al Masaood – though its ‘Emiratization program’ – remains committed to foster the skills of local youth and provide them with training and job opportunities in the fields of automotive, industrial, construction, and real estate sectors.