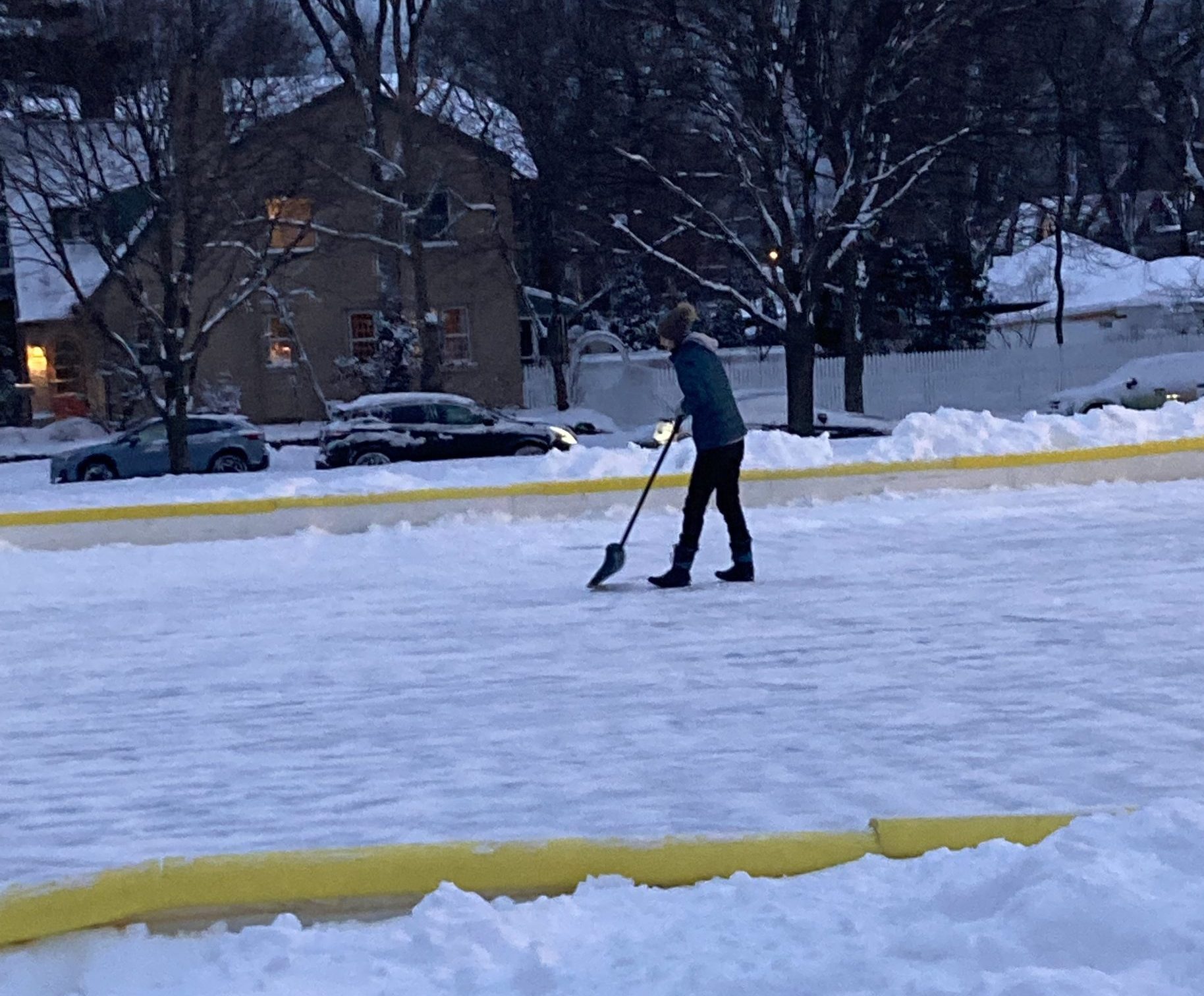 During the winter when temperatures dip to 32℉ or lower, ice skaters in southeast Evanston enjoy a portable rink set up in Baker Park. But this year, someone damaged the rink before the city had even finished building it. The city deemed the rink unsafe and closed it.

Thanks to a group of anonymous helpers, though, skaters continue to use the rink.

Located at the corner of Forest Avenue and Keeney Street, Baker Park is home to one of four free ice rinks in Evanston, the others being Arrington Lagoon, Foster Field and Ackerman Park. The Baker Park rink is crafted into a large rectangle by staking into the ground prefabricated plastic boards. Ideally the ground should be as level as possible and free of rocks, twigs and other debris. A crew from the city’s Public Works department assembles the rink boards before the weather gets too cold or the ground freezes, which happened last Nov. 10.

Then the waiting begins. Public Works typically fills the rinks when the prolonged forecast is no higher than 32°. This winter, that did not happen until early January. Before the rink is filled, it is essential to fit a liner over the entire surface of the rink. The liner must be large enough to extend up the side of the boards and drape over the top.

The rink liner is important because it helps maintain the quality of the ice. Portable rink liners are typically made of heavy-duty white plastic, which reflects sunlight and allows the ice to stay frozen longer. Without the liner, leaves, dirt and grass under the ice attract the sun and increase the melt rate of the ice. Once the liner is in place and the surface smoothed of any air pockets or bumps, the guardrails (yellow plastic tubes that look like pool “noodles”) are placed over the tops of the sideboards. The rink is then ready to be flooded with water.

The process of building up the ice requires layers of water to be applied and completely frozen over before adding another layer of water. The goal is to have a base of four to six inches of ice before the rink is ready for skaters. The complete process of flooding the rink and grooming the ice takes about eight hours over several days, according to Lawrence Hemingway, Director of the city’s Parks and Recreation Department.

On Jan. 7, a city crew attached a hose to a nearby fire hydrant and flooded the rink until it was filled with a few inches of water. They posted signs saying the rink wasn’t ready for skating and doing so could cause damage to the liner.

Their plan was to let the water freeze over the weekend and return on Jan. 10 to finish the process, building up a second layer of ice. By the third day, if all went according to plan and the temperatures remained low, the rink would be filled and the ice would be solid. Parks and Recreation would make sure the ice was thick enough for skating and a crew would fill and smooth out the ice.

Unfortunately, after the crew left for the day and the water turned to ice, one or more people skated on the rink and severely damaged the liner. Small nicks and tears on the sides can be patched with underwater glue or plastic patches, but these gashes were irreparable. The area around the gashes will never freeze properly and are the first sections to melt. Mushy ice results in unsafe skating conditions. The damage took place too late in the season to order a replacement liner, which would have required disassembling the entire rink and starting over.

Hemingway visited the site and decided that due to the gashes in the liner, the rink was “not up to the city’s standard” and “is not going to be operable for this current season.” The city intends to purchase a new liner for next year and has no plans to take down the rink until the end of this winter.

Yet, the rink is operating this season – without assistance from the city. Invested community members regularly visit the rink to shovel snow and tidy up. After a snowfall on Feb. 2, a RoundTable reporter visited the rink and observed a woman shoveling snow off the ice. When asked if there were a schedule of volunteers and tasks, she shook her head and smiled. “No. People just show up and help.”

Someone refills the rink with water to refresh the ice, possibly the same person who smooths out the ice with a tool that looks like a very long windshield wiper.

The rink and snow around Baker Park provide days of fun and entertainment for this corner of Evanston. One mother of three children chatted with a reporter as they watched the children playing, oblivious to the freezing temperatures. There was a small ice cave the kids were popping in and out of before running off to play on the ice.

The mom described how last year there was a large line of ice caves circling the rink, built by neighborhood kids who were sick of being cooped up inside. There were always parents hovering nearby, ready to jump in if needed.

She described how when the weather started to warm up and the caves were starting to collapse, she joined other concerned parents on the field to stomp on the cave roofs, expediting deconstruction, to make sure no child would get trapped. They were looking after one another.