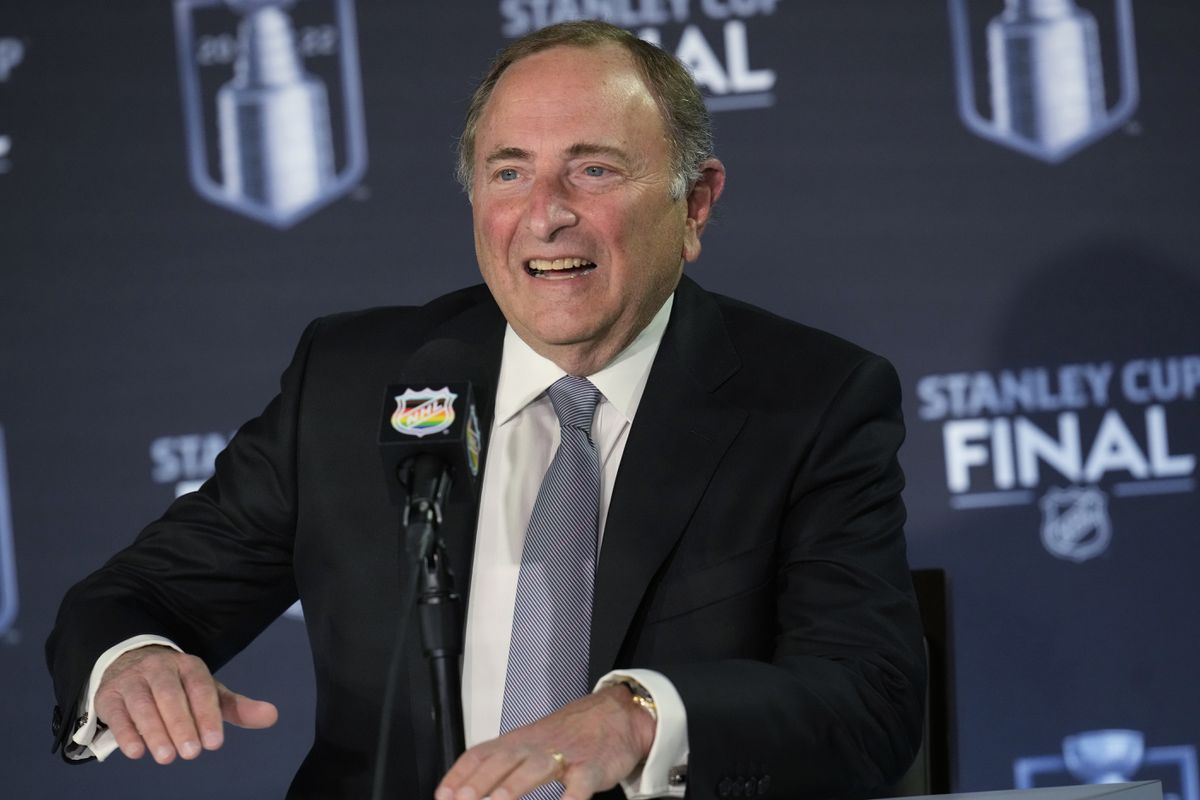 NHL Commissioner Gary Bettman said the league is projecting record revenue this season, an increase he credits to more scoring leading to higher television ratings and more interest in the game.

Bettman at his annual state of the league address Wednesday before Game 1 of the Stanley Cup Final estimated revenue will surpass $5.2-billion. He said he received information earlier in the afternoon indicating that was a conservative estimate.

“We were able to stabilize the business and power through,” Bettman said. “Didn’t mean that at times there weren’t challenges, didn’t mean at times we didn’t have to adjust. Some of you on occasion said we were making it up as we went along, and we were, but we did what we had to do to get through it.”

The league generated $4.6-billion in the last normal full season in 2018-19, before the pandemic wreaked havoc on sports and more specifically the NHL given its larger reliance on ticket revenue and other arena money that was not possible with no fans in the building or limited capacities.

The financial increase also stems from new U.S. media rights deals with ESPN and Turner Sports that went into effect this season. The salary cap is projected to go up $1-million to $82.5-million next season, though bigger bumps are likely in the following years after players finish paying off a substantial debt to owners accrued over the past couple of years to balance hockey-related revenue 50/50.

A constant message from the league and NHL Players’ Association has been a desire to grow the total pie for the benefit of everyone. Perhaps the highest-scoring season since midway through Bettman’s first year on the job is aiding that effort.

An average of 6.28 goals a game were scored during the regular season, the highest rate since 1992-93.

“Everything we do, particularly around the game, and from a business standpoint, is only important to the extent that the game is healthy on the ice, and the game is healthy on the ice,” Bettman said. “The younger stars, our competitive balance is unmatched by any of the other major leagues, and it gives us incredible races in the regular season and it gives us playoffs that are as unpredictable as anything you can say.”

Speaking hours before the two-time defending Stanley Cup champion Tampa Bay Lightning and the Colorado Avalanche faced off in Game 1 of the first final in Denver since 2001, Bettman also expressed joy and relief at a return to normalcy in his first Cup Final address done in person in three years.

“I am delighted that after two and a half years, things are actually feeling normal,” he said.

Bettman said the NHL was not aware of allegations made by a woman who said she was sexually assaulted by multiple members of Canada’s 2018 world junior hockey team until Hockey Canada settled a lawsuit last month. The league launched an investigation Deputy Commissioner Bill Daly said was under way.

“Obviously, we’ve been in touch with the Players’ Association,” Daly said. “They’ve been extremely co-operative to this point in facilitating and arranging interviews with each of the players on this team.”

The plaintiff, identified as “E.M.” in court records, claimed she was repeatedly assaulted while intoxicated in a London, Ontario, hotel room following a Hockey Canada event honouring the gold medal-winning junior team. In a statement released May 26, Hockey Canada said the plaintiff chose not to speak with the both the police and Hockey Canada’s independent investigator and that the woman did not want to identify the players involved.

Several players from that team are currently in the NHL.

“As we conduct the investigation, we have allegations of an anonymous party against eight anonymous parties,” Bettman said. “This is a challenging situation, but we didn’t know anything about it.”

No Cup in Russia

Daly said the league informed the Lightning and Avalanche that players will not be allowed to take the Stanley Cup to Russia or Belarus this summer, a product of the war in Ukraine. Tampa Bay has three Russian players, and Colorado has one.

“We may owe a Cup trip in the future, just like we did with the pandemic,” Daly said. “But it’s not happening this summer.”

Bettman and Daly said the league is still talking with the Players’ Association and International Ice Hockey Federation about hosting a World Cup of Hockey in 2024. The goal is to host it in February, which is causing some hurdles but not enough for the NHL to seriously consider a different spot on the calendar yet.

“It’s still a priority for us to be in February,” Daly said. We’ll see if we need workarounds to get there, but we think it’s very important to the long-term success of this property on a regular basis to be in that time period.”