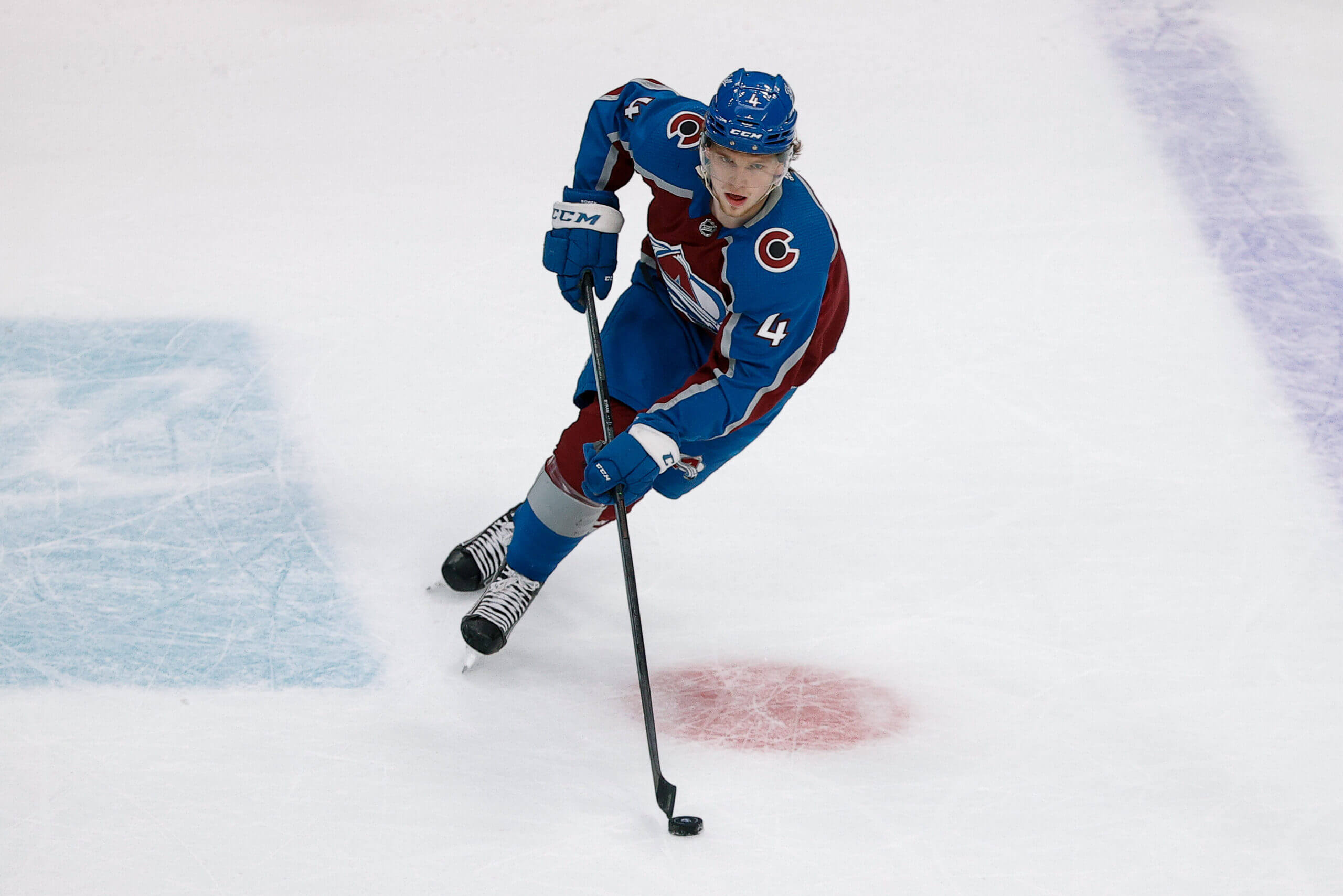 In the days after Colorado clinched a spot in the Western Conference final, Erik Johnson took moments to look back, to soak in an accomplishment without losing sight of the bigger goal ahead. Considering where he was at this time last year, he thought, it’s been as drastic a turnaround as he could have hoped for.

“I had doubts about whether I would play again,” said the veteran, who missed all but four games in the 2020-21 season, primarily because of a concussion. “To be able to be in the Western finals and have a big impact is a pretty good feeling.”

Now 34 and in his 12th season with the Avalanche, Johnson is the longest-tenured Denver athlete on any of the city’s four major sports teams, edging out Rockies outfielder Charlie Blackmon, who also played his first Colorado games in 2011.

Johnson’s defensive partner is on the other end of the spectrum. Bowen Byram is 20 and the youngest player to have appeared in an Avalanche game this season. But the rookie also knows what it means to endure tough circumstances, to wonder if his health would ever fully recover. These playoffs have said a lot about both defensemen, for reasons similar and different. They are two key cogs for an Avalanche team hoping to win the Stanley Cup, and each is playing their best hockey of the season at the most important time.

The elbow came flying, and just like that, all the progress vanished.

Byram was battling for a puck along the boards in November. As he did, Vancouver captain Bo Horvat’s right elbow clipped him in the head, sending the 20-year-old to the dressing room. He played only seven of Colorado’s next 57 games.

“Lots of challenges for Bo over the last couple years with his health, mainly, and getting his play to a level where he can be a difference-maker in the NHL,” said coach Jared Bednar earlier these playoffs, emphasizing how proud he is of his young defenseman’s perseverance.

Concussion recovery doesn’t always move in a straight line. Byram knew that from his first NHL season, which saw him suffer two concussions that were likely made worse because of a bout with COVID-19. He battled their lingering effects and vertigo well into the offseason and didn’t feel like himself while with his skating group in Vancouver. “The way I describe it is I didn’t feel like myself,” he said earlier this year. “I couldn’t do things I could usually do.”

But he turned a corner late in the summer and looked like a Calder Trophy contender early in the season, tallying three goals and eight points in the first 11 games of the season. Then came the Horvat elbow.

Though the Avalanche initially cleared him to play two weeks after, lingering issues likely stemming from his concussions prevented him from consistently returning to the lineup. He ultimately went on personal leave in January and was out for nearly three months.

“It wasn’t easy, but I had a great support staff with my family,” Byram said Sunday. “Obviously the organization did a great job helping me get the help I needed. It’s in the rearview mirror.”

Unlike Byram, Johnson didn’t have any regular-season setbacks with his concussion recovery. He played in 77 games, tied for the second-highest total in his career. But getting to that point was harrowing, just like it was for his young teammate. In his fourth game of the 2020-21 season, Johnson took a hit from Minnesota’s Jordan Greenway as he approached the center red line. The hit itself wasn’t the problem, Johnson said, but as he fell backward, he wasn’t able to break his fall with his left arm. His face smacked against the hard ice.

The play changed the course of Johnson’s season. Instead of playing a key defensive role on a Presidents’ Trophy-winning club, he went through a doubt-filled recovery process.

“I was just disappointed that it wasn’t getting better,” he said. “I just wanted to feel normal, firstly.”

Eventually, he felt well enough to rejoin the team, receiving a hug from captain Gabriel Landeskog when he skated at an optional practice ahead of the team’s 2021 series with Vegas. But Johnson, the No. 1 pick by St. Louis in the 2006 draft, still hadn’t participated in a full practice by the time the Golden Knights eliminated Colorado. Between the injury and missing the team’s opening 2019-20 games with COVID-19, he had sat out almost the entire year. “It was a little adversity, but I think you’ve just got to keep things in perspective,” he said early this season. “A lot of people were going through some very serious illness with COVID. I got over it quickly. I got an injury playing professional hockey, a sport I love to play, I’m lucky to play.”

In the offseason, Johnson waived his no-movement clause ahead of the expansion draft, trusting Seattle wouldn’t take him given his age, injury situation and sizable $6 million cap hit. It was a team-first gesture and allowed Colorado to protect Cale Makar, Devon Toews and Girard from the Kraken. As expected, Seattle didn’t take Johnson, instead picking Joonas Donskoi, and the Colorado defenseman finally felt fully healthy in July. He attacked training with a big goal in mind.

“As a player, you always have that void if you never win the Stanley Cup,” Johnson said. “That’s what kept pulling me back to try and get healthy last summer.”

Heading into the season, Johnson received a call from general manager Joe Sakic.

“We need you this year,” he remembered Sakic saying. “We’re excited to have you back.”

Johnson has seen low points in Colorado, starting with his arrival in 2011, when the Avalanche acquired him from St. Louis. Johnson came to the team while it was in the midst of a 10-game losing streak, and right after they finally got a win, they suffered another 10-game skid. The Avalanche finished with the second-worst record in the NHL that year, and Johnson didn’t play in the playoffs until 2014. He then was on the team when it finished with only 48 points in 2016-17.

So Johnson doesn’t take Colorado’s playoff success this season lightly. He knows the heartache that came before it.

Colorado was already a playoff team when Byram arrived. The Avalanche selected him at No. 4 in 2019 with a pick acquired in the Matt Duchene deal, and after a year of seasoning in the Western Hockey League, he traveled to the Edmonton bubble for the 2020 playoffs. He didn’t make an appearance that postseason, but early the next season got in his first NHL game.

“He’s played forever,” Byram said with a laugh. “I just try to be a sponge.”

Both put together solid (though, in Byram’s case, injury-riddled) regular seasons, but they have reached a different level in the postseason. The Avalanche have accounted for 61.73 percent of the expected goal share while Byram has been on the ice during five-on-five play this postseason, according to Natural Stat Trick, and 58.80 percent with Johnson on the ice. Both have played in every game, and they have seized more responsibility with second-pairing blueliner Samuel Girard going down with a broken sternum.

Byram dazzled with more offensive opportunities against St. Louis, tallying five assists in Colorado’s three full games without Girard and averaging more than 18 minutes of ice time. Johnson, meanwhile, came up with a big goal in Game 4 and an assist on Darren Helm’s last-second winner in Game 6. Bednar said he might be playing as well as he has since he took over as coach in 2016.

“He’s been healthy all year. He’s contributing out there. He’s playing great hockey for us,” Sakic said. “To see where he’s come and to see how he’s been all year and the excitement in him, he’s like a kid out there. I’m really happy for him.”

And he and Byram — the actual kid out there — have emerged as a perfect postseason pairing. Bednar said he initially put them together when Byram returned from injury in April because he thought a veteran would help his younger teammate re-acclimate, and they have worked well together.

Johnson and Byram have played 103 five-on-five minutes together these playoffs, according to Evolving-Hockey, and have the second-highest expected goals share (63.48 percent) of any defensive pairing in the playoffs that has played more than 100 minutes together. Both were on the ice for more than twice as many Avalanche scoring chances generated than allowed at five-on-five, according to Natural Stat Trick.

“You never know how many chances you’re going to get (to win the Stanley Cup),” Johnson said. “I just tried to take it to a new level and do anything I can to help this team do that. I’m going to continue to do that until we reach our goal.”

And he’s found a defensive partner in Byram who helps bring out his best. And that works both ways.

“It’s just been fun,” Johnson said. “We like to joke around, goof around and joke around off the ice and give each other a hard time. But on the ice, we’ve found a good chemistry, and we’re playing well together. It’s been a good marriage, a good partnership for us.”