Canucks: Sedins’ school to be a ‘hands-on’ assist for team’s young players – The Province 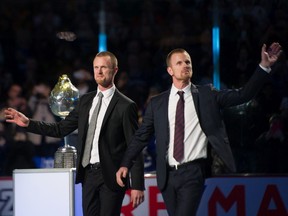 They were groomed in their homeland and hyped as hot-shot National Hockey League rookies. They then struggled to meet sophomore expectations with the Vancouver Canucks and had to work their way through a series of setbacks.

The ties that bind the wingers will reach another level next fall as Daniel and Henrik Sedin transition from special advisers to the general manager. They’ll work with young players on and off the ice in Vancouver and with the American Hockey League affiliate in Abbotsford.

The timing couldn’t be better for the 21-year-old Höglander.

He took a step backward this season and missed the final 19 games with a groin and core injury suffered in a mid-March practice. It required surgery a month later and his capacity to rebound physically and mentally will be tested.

Daniel scored 20 goals in his rookie season under the guidance of coach Marc Crawford, but slumped to just nine the following season. It would take five seasons of patience and persistence to return to the 20-goal plateau. And once he did, it was a launching point for surpassing the 30-goal mark four times, including 41 goals in 2010-11 when he won the Art Ross Trophy as the NHL’s leading scorer.

Höglander is no Sedin, but he can be better.

The 5-foot-9, 190-pound bowling-ball winger needed 10 games to score his first goal this season and endured a pair of 11-game goal droughts to drop out of the top-six mix. He finished with just 10 goals and 18 points in 60 games and defensive deficiencies led to a healthy scratch in January.

Höglander’s paltry 7.6 shooting percentage was tied with Jason Dickinson as worst among club forwards. It paled in comparison to a rookie season split between here and the Swedish Hockey League.

Höglander had 14 points (5-9) in 23 games with Rogle BK Angelholm before transitioning to start the shortened NHL season in January. He scored in his first game with a deft deflection, amassed 13 goals and 27 points in 56 games to make it 41 points overall (18-23) in 79 combined games.

He needs to return to that level of confidence and swagger.

“If I had a chance to learn from Danny or Hank as a player, I would be super excited and a little bit in awe,” Crawford said Tuesday. “Great guys. So smart and so much the right guys. What an opportunity for young Canuck prospects.

“Hands-on instruction is the best. I believe veteran players are the best teachers for young, developing players. They usually still have the ability to demonstrate exactly what they mean, and their experiences of when they used it (skill) and against whom.

“Getting to know how a player wants to be coached is more important than knowing they need to be coached. I learned that very late in the game.”

Boudreau saw missing elements in Höglander’s defensive game and decisions with the puck that require attention to be a reliable three-zone player.

“One thing we wanted to see more was a 200-foot game,” Boudreau said soon after the Canucks’ season ended. “He’s capable of scoring 20 goals, but he’s one of those guys when he loses his confidence, he didn’t want to shoot the puck. I tried to explain it’s not all about points, but he always thought he had to score.

“He’s talented and he’ll be better and he gets mad when I give him crap. Sometimes, it’s tough love to get guys to where they can play how they should. He has learned a lot from that.”

The Sedins are currently away for a few weeks before everything ramps up with the NHL Draft, prospects camp and free agency.

Last June, when they accepted special-adviser roles to previous general manager Jim Benning — player evaluation, development, draft and free-agency preparation plus working with staff in Abbotsford — it could have been a one-and-done scenario.

Provide franchise input, help chart a better course and then get on with life. But that’s not the Sedins. Never was, never will be. From their on-ice commitment to off-ice charitable endeavours, they always went the extra distance.

Remaining with the organization in heightened capacities speaks to the impression that the new hockey operations department has made on the Sedins. From defined mandates and daily dedication to promoting on merit and adding staff diversity, the twins were sold.

The Sedins always thought there was potential to return the franchise to more prominence. A year ago, they spoke from the heart and that promoted hope for a long alliance.

“The only reason we came in is to do a good job and that’s been on our minds from the first days we came here 20 years ago,” Daniel said at that time. “We’ll do the same in this role. It’s going to take a lot of learning and we’re aware of that, but we’re 100 per cent committed.”

Added Henrik: “We care about this team. This is a side of the game where we can help. We’re not looking for fame again and let’s be clear with that. We’re hoping to do a good job and stay in the background as much as possible.”

Well, good luck with that.

The first sight of the Sedins instructing young players next fall will command considerable attention.

More news, fewer ads, faster load time: Get unlimited, ad-lite access to the Vancouver Sun, the Province, National Post and 13 other Canadian news sites for just $14/month or $140/year. Subscribe now through the Vancouver Sun or The Province.

Sign up to receive daily headline news from The Province, a division of Postmedia Network Inc.

The next issue of The Province Headline News will soon be in your inbox.