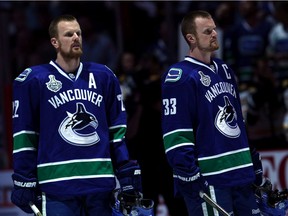 For a team to be truly successful, Daniel Sedin agrees, everyone on the club needs to feel empowered to lead. From captain down to fourth-liner, everyone has a role to play.

“Andrew Alberts, the defenceman we used to play with back in the day, he used to crush us in practice. He hit us hard. That’s leadership to me because he made us better,” Sedin recalled. “He maybe hit us harder than we wanted to at the time but that made us better players. He didn’t play every game but I think he made our team a lot better by how he practised.”

And it’s this kind of thinking he and his brother Henrik are hoping to instil in young and aspiring Canucks in their new roles working with the team’s player development department.

The Canucks announced Monday that the Sedins, as well as former Canuck Mikael Samuelsson and ex-NHLer Mike Komisarek, were joining the club’s player development department. The Sedins’ role will have them focused on working with the team’s aspiring players in Abbotsford, as well as younger players on the NHL squad itself in Vancouver.

They’ll be on ice from time-to-time working on skills but more than anything, they’ll be focused on giving young players feedback, both in terms of their game play but also in learning how to manage their mental and emotional states.

“All this allows us to be closer to the players and be a part of that (development) group. But I also think it allows us to learn a different side of the organization,” he added. “We’re very excited.”

One thing they know well from their playing days is the importance of learning how to shut out the noise that comes with playing in a Canadian market. As young players, they heard a lot of the criticisms levelled at them, for better or worse.

And for young players today, with the pressures social media can add to a player’s internal discourse, learning to manage yourself is even more essential.

All 34 Photos for Gallery

Full Screen is not supported on this browser version.

You may use a different browser or device to view this in full screen.

“‘What do I do today to make me a better player tomorrow?’ That’s the only thing,” Sedin said of what players should be thinking about. “In the Canadian market, when things go well, I think people think so highly of you as a hockey player — almost too much — and things go badly they criticize more than they should. So it’s kind of hard to stay even-keel and just go about your business.”

That kind of pressure is very familiar to Dr. Saul Miller, a long-standing sports psychologist who has worked with many NHL teams and players over the past 40 years.

One has to press on and persevere, to take on challenges and to lead for yourself. Pointing fingers elsewhere doesn’t get you anywhere, Miller said.

For many young players, they need to learn to focus on the present and on what they do well. Sometimes they’ll have had coaches growing up who spent so much time highlighting their flaws, they’re at risk of losing sight of why they’ve gotten as far as they have, Miller said.

“You’re invited because you’re a good player,” he’ll remind young players. Making the NHL does mean that suddenly you’re just one of many good players as opposed to being the best player on their team, as they so often were growing up. But that’s not something to fear.

“I want them to have the focus, the feeling and the attitude,” Miller said. “I want them to focus on why they’re a good player. To think, ‘I’m hockey-smart. I skate well. I can pass, shoot.’ We visualize themselves performing at their best. You’ve got to be thinking, ‘Yes I can,’ you’ve got to be a predator and not the prey.

The Canucks have sports psychologist Alex Hodgins as their mental performance consultant. He wasn’t made available for an interview, but Sedin said he and his brother will indeed be liaising with Hodgins as part of their work.

“We have a good relationship with Alex, I really enjoy talking about these kinds of things,” Sedin said.

The twins’ new role will really kick into gear at the Canucks’ summer development camp, when the team’s prospects, both new and old, will assemble in Vancouver for the first time in three years.

“You have to build the relationship where the players feel they can trust us and they can come to us with anything, like they’re going through a slump or whatever. Or things come up throughout the year and they know that we’re there for them,” Sedin said.

“This summer we have to make sure that we’re prepared for when training camp starts, but also we’ll be at development camp too and that’s a good start for us to start building trust, especially with younger players.”

More news, fewer ads: Our in-depth journalism is possible thanks to the support of our subscribers. For just $3.50 per week, you can get unlimited, ad-lite access to The Vancouver Sun, The Province, National Post and 13 other Canadian news sites. Support us by subscribing today: The Vancouver Sun | The Province.

Sign up to receive daily headline news from The Province, a division of Postmedia Network Inc.

The next issue of The Province Headline News will soon be in your inbox.