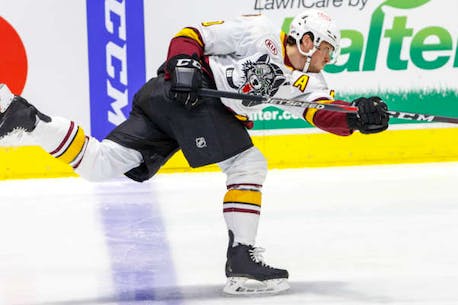 SYDNEY, N.S. — A Cape Breton hockey player will be on the ice when the American Hockey League’s Calder Cup final begins on Sunday in Chicago.

Cavan Fitzgerald of Lingan will look to capture his first Calder Cup championship when his Chicago Wolves battle the Springfield Thunderbirds in the best-of-seven league final.

Fitzgerald and the Wolves earned their spot in the final with a 4-2 series victory over the Stockton Heat, the AHL affiliate of the Calgary Flames, in the Western Conference final.

The team also knocked off the Rockford IceHogs in three games in the Central Division semifinal and Milwaukee Admirals in four games in the divisional final.

The 25-year-old Fitzgerald joined the Wolves during the 2020-21 season and later signed a two-year contract with the Carolina Hurricanes, the NHL parent club of Wolves.

Fitzgerald served as an assistant captain the last two seasons with the club and has been a key part of the team’s blueline through the 2021-22 season.

In the early years of his career, the defenceman played two years with the Cape Breton Tradesmen – now the Sydney Mitsubishi Rush – of the Nova Scotia Under-18 Major Hockey League. Fitzgerald later signed with the Mooseheads as a free agent and played a season-and-a-half in the provincial capital, before being traded to the Shawinigan Cataractes, where he served as the club’s captain for the 2016-17 season.

As a free agent, Fitzgerald signed an entry-level contract with the San Jose Sharks and joined the team’s AHL affiliate, the San Jose Barracuda, where he played two years in northern California.

He’d later sign with the Hurricanes organization, playing one year with the Charlotte Checkers before the organization moved its farm system to Chicago.

As for Springfield, the team will feature former Cape Breton Eagle forward Mathias Laferriere, who finished his rookie season in the AHL with three goals and nine points in 56 games.

The Thunderbirds, the affiliate team of the St. Louis Blues, won the Atlantic Division semifinal in three games with the Wilkes-Barre/Scranton Penguins, before knocking off Charlotte in three games in the divisional final.

Springfield secured their spot in the league final after eliminating the Laval Rocket, featuring former Eagle Tobie Paquette-Bisson, in seven games in the Eastern Conference final on Wednesday.

The final will shift to Springfield, Mass., for Games 3 and 4 on Wednesday and June 24 with puck drop slated for 8:05 p.m. Atlantic time both nights. Game 5, if necessary, will be played on June 25 in Springfield.

If the series goes beyond five games, it will return to Chicago for Games 6 and 7. Both games, if needed, will be played on June 28 and 29 respectively at 10 p.m. Atlantic time.

The series will be available online at AHLTv. To watch the games, visit www.theahl.com.

The Cape Breton Post contacted Fitzgerald for comment on the series, but he wasn’t immediately available at publication time.