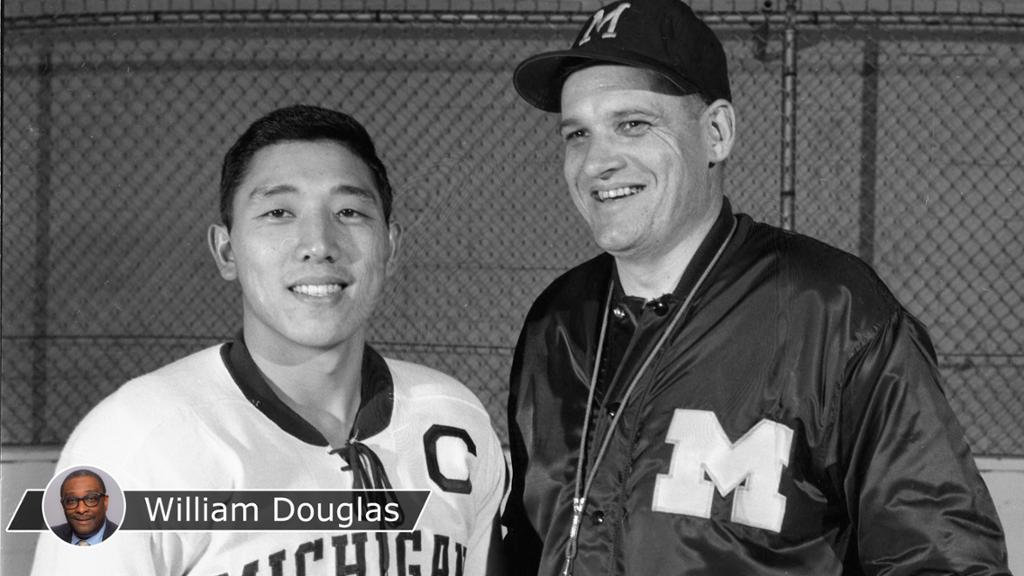 Yuki Miura remembers meeting Hitoshi “Mel” Wakabayashi at a college hockey game in Tokyo a few years ago and paying respect to the person who he said helped blaze a trial for Japanese players to follow.

“Mr. Mel Wakabayashi, he’s like a superstar in Japan,” said Miura, a forward for Iowa of the ECHL who was playing for Lake Superior State University when he met Wakabayashi. “He proved that Japanese hockey players can do anything. He showed that there is a way for Japanese players to show their skills and stuff in North America.”

Despite being 5-foot-6, 165 pounds, Wakabayashi was a giant in NCAA Division I hockey in the 1960s who later influenced the sport as a player and coach in Japan, when he moved there following a brief U.S. minor league stint.

Born in a Japanese internment camp in British Columbia during World War II, Wakabayashi helped lead the University of Michigan to an NCAA Division I championship in 1964. He scored two goals in a 6-3 win against the University of Denver in the title game.

The swift-skating center scored 168 points (74 goals, 94 assists) in his college career, led the Western Collegiate Hockey Association in scoring in 1964-65 and was the league’s player of the year in 1965-66.

Wakabayashi was named one of the WCHA’s Top 50 hockey players in 2001-02 and was enshrined in Michigan’s Hall of Honor in 2006, joining university sports greats like former President Gerald Ford (football), Red Berenson (hockey), Rudy Tomjanovich (basketball) and Jim Abbott (baseball).

“I’ve been pretty lucky,” said Wakabayashi, who is 79 and lives in Tokyo. “Growing up, I never thought about going to university. My dad was a hard laborer, worker and we didn’t have enough money to send me to Michigan.”

Luck had nothing to do with Wakabayashi’s career, said Eddie Wright, a childhood friend who played with him and his younger brother, Osamu “Herb” Wakabayashi, with Chatham of the Border Cities Junior B Hockey League in 1962-63.

“Mel was my hero,” Wright said. “First of all, he was talented and extremely quick, and he had vision. He was like [Wayne] Gretzky with that vision.”

The Wakabayashi brothers and Wright formed what became nicknamed “the international line” for Chatham, and each made their mark in the college game and beyond.

Mel excelled at Michigan, and Herb and Wright starred together at Boston University from 1966-69. Wright went on to become NCAA hockey’s first Black coach at the University at Buffalo in 1970 and a scout for the Mighty Ducks of Anaheim in 1994.

Mel Wakabayashi had a decision to make when his college career was winding down about turning pro — but in which sport? He was an All-Big Ten baseball player who was invited to the Detroit Tigers camp in Lakeland, Florida, but ultimately wasn’t signed.

He signed with the Detroit Red Wings, who assigned him to Memphis of the Central Hockey Leaague, and later to Johnstown of the Eastern Hockey League.

Wakabayashi was preparing for the Red Wings training camp in September 1967 when he received an intriguing offer.

“The chance to go play in Japan came up,” he said. “People were telling me, ‘You’ve got a contract with the Red Wings, why are you going to go to Japan for less money? Are you crazy or something?'”

Wakabayashi said the appeal of playing in his parents’ homeland and the prospect of influencing Japanese players as a coach once his playing days were done was too strong.

But he quickly learned changing continents and cultures wasn’t easy.

“People would speak to me in Japanese automatically and I didn’t know any Japanese, maybe a couple words like ‘thank you’ and ‘bye-bye,'” he said. “It was a culture shock, but I enjoyed first stepping off the plane. It was an amazing experience because everybody was Japanese, they looked like me.”

He played 11 seasons in the six-team Japan Hockey League, regularly finishing among its top scorers, and became a player-coach with Kokudo of the NHL in 1972-73, a year after his brother joined him in Japan.

Herb Wakabayashi represented Japan in the 1972 Sapporo Olympics, 1976 Innsbruck Olympics and was Japan’s opening ceremony flag bearer at the 1980 Lake Placid Olympics. He died on June 2, 2015, at 70.

Mel Wakabayashi said coaching Japan’s national hockey team in 1980 was the capstone of his career.

“That walk into the Olympic stadium, opening ceremony, had to be the finest moment of my life,” he said. “My parents were there, and you’re on world television.”

Wakabayashi said he’s proud of his hockey accomplishments and pleased if he’s created a trail for Japanese players to follow.

Miura skated in the ECHL and forward Yushiroh Hirano split last season playing for Cincinnati of the ECHL and Abbotsford, the Vancouver Canucks’ affiliate in the American Hockey League.

“Well, for myself, I just played the game as hard as I could and didn’t think really of my legacy,” Wakabayashi from his Tokyo home. “But they call me a legend here. So you know, that means a lot to me.”