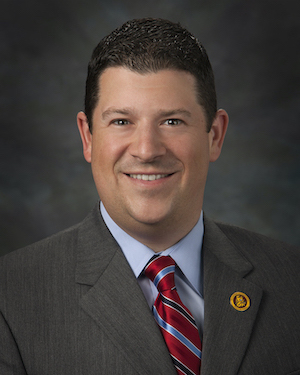 University of Denver Chancellor Jeremy Haefner announced this morning the hiring of Josh Berlo as the new vice chancellor for athletics and Ritchie Center operations.

“We are thrilled to welcome Josh to the University of Denver and we are confident he has the experience, passion, skills and exciting ideas to thrive in this role,” Haefner says.

Josh brings to DU over 20 years of experience in collegiate athletics program leadership. Since 2013, he has served as the director of intercollegiate athletics at the University of Minnesota, Duluth (UMD) where he helped usher in the most successful era of the program’s history including two men’s ice hockey national championships. Previously, Josh served as the senior assistant director for guest relations and event marketing at the University of Notre Dame.

Berlo will oversee the University of Denver’s athletics department and its 18 NCAA Division I programs that have combined to win 34 national championships, 127 individual national titles and 12 of the last 13 I-AAA Directors’ Cups for the most successful non-football school in the country.

“My family is honored to be joining the prestigious University of Denver and its exceptional academic and athletic traditions,” Berlo said.  “DU offers a world-class experience for our student athletes, coaches and staff and I look forward to contributing to that experience as well as the overall institutional mission.”

Provost and Executive Vice Chancellor Mary Clark, who co-chaired the search committee, says, “I couldn’t be more excited than to have Josh join us as DU’s new AD.  I look forward to collaborating with him as we continue to build out our 4D student experience, where student-athletes have long led in this space. My warm congratulations to Josh and his family as they join the DU family!”

In 2017-18, Berlo was named the National Association of Collegiate Directors of Athletics (NACDA) Division II AD of the Year. In his time at Duluth, Berlo headed UMD’s deliberate focus on the student-athlete experience, strategic plan initiatives and led the fundraising efforts for the Bulldogs’ sport programs. He also made fan experience and engagement a top priority to help expand the national profile of the UMD athletic department. Recently he served as a co-chair of the search committee for new NCHC Commissioner Heather Weems.

The Warren, Rhode Island, native helped spearhead many projects in the Bulldogs’ athletic department, including the $10 million renovation of Romano Gymnasium (basketball and volleyball) as well as major upgrades to both James S. Malosky Stadium (football) and the Ward Wells Fieldhouse (track). Berlo led the launch of Bulldog Productions (streaming), enhanced the regional and national TV footprint, signed an equipment apparel deal that more than doubled the value previous provided, oversaw the addition of new LED video boards in four of its facilities and saw the setting of all-time single-season and single-game attendance records in men’s hockey and football.

“Josh is an experienced and passionate leader who understands the challenges facing intercollegiate athletics today,” says Board of Trustee Chair Elect John Miller, BSBA ’75, MBA ’76., who co-chaired the search committee.  “He will build upon our tradition of athletic success at the highest levels and will be unyielding in his support of our student -athletes pursuit of excellence both in the classroom and on the field.”

In his nine seasons, Berlo and the Bulldogs finished in the top 50 of the DII Directors’ Cup five times (of seven possible due to the COVID-19 pandemic) and currently sits in 29th through the winter sports calendar, which would mark the highest finish in his tenure. During his time at Duluth, the Bulldogs won the Division I men’s hockey national championship in 2018 and 2019, and finished runner-up to the Pioneers in 2017. In women’s hockey, the Bulldogs finished as the national runner-up to Ohio State this past spring.

Berlo earned his bachelor’s degree in sport management from the University of Massachusetts in 1999 before finishing his MBA in finance and communication from Notre Dame in 2004. He and his wife Meg have one son, Michael.

What Others are Saying About Berlo:

“Josh Berlo is a brilliant hire!  A natural leader who is very well prepared and inordinately seasoned to facilitate a tremendous experience for student athletes, the university community as well as all other external constituencies closely aligned with the University of Denver. Just a phenomenal “win” for that beloved enterprise that is college athletics.”

“Josh has been a tremendous leader for us at UMD. He created a collaborative culture in athletics that has resulted in unprecedented success across many different sports during his tenure. He and I have developed a great partnership over the years. With his support and guidance, the women’s hockey program has reached back-to-back NCAA Frozen Fours while also establishing a reputation on campus for academic excellence and positive community involvement.”

“I had the privilege of working closely with Josh over several years at the University of Notre Dame.  The University of Denver has made a superb hire! Josh is a person of impeccable integrity, with an unsurpassed work ethic and a perennially upbeat demeanor. He will always put the student-athlete first. I cannot wait to watch Denver Athletics soar into the future.”

“It has been a tremendous honor to have worked with Josh Berlo at UMD. His leadership of Bulldog Athletics has been stellar, founded on integrity, collaboration, and a sincere commitment to student athletes in and out of the classroom. I have especially appreciated his partnership in advancing Title IX on our campus.”

Director of Athletics, University of Michigan

“The University of Denver just made a great hire. Josh has established himself as one of the best young Athletic Directors in intercollegiate athletics. He has proven leadership that drives success in the classroom, championship performance in sports and inspires young people to grow into amazing individuals. Congratulations to Josh and DU.”

“I am sad for the University of Minnesota Duluth, but proud of Josh Berlo as he becomes the next Athletic Director at the University of Denver. Josh has done an incredible job as UMD’s AD over the past nine years. He leaves our Athletics programs in great shape, with a solid foundation on which to build further. UMD Athletics is on an impressive trajectory of academic and competitive excellence. I thank Josh for his outstanding service to UMD and to the Duluth community. We will miss him.”

About the University of Denver

Founded in 1864, the University of Denver is a private university that empowers students who want to make a difference. Recognized as one of the top research universities in the country, DU has more than 300 academic programs serving about 12,000 graduate and undergraduate students. DU students benefit from an experience on two campuses—in the City and in the mountains, that channels their passions to serve the public good. Visit the University’s Newsroom or follow the University on Facebook, LinkedIn and Twitter.

Visit DenverPioneers.com for complete coverage of all 18 of DU’s NCAA Division I sports.