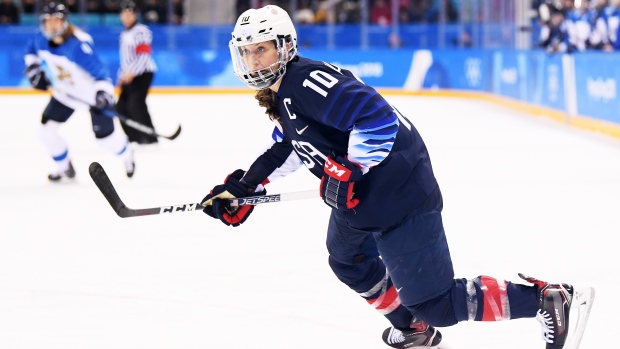 The New Jersey Devils promoted Meghan Duggan to director, player development on Tuesday, one year after she first joined the organization.

Duggan was first hired manager, player development in May of last year.

Along with Duggan’s promotion, the Devils also announced that Dr. Angus Mugford has joined the organization as Senior Vice President, Player Development and Performance,

“Supporting the development of our players from the moment they join our organization and guiding their individual journeys to become successful NHL players is paramount,” Devils general manager Tom Fitzgerald said. “We have a young, evolving core in New Jersey, on the verge of taking another leap forward, and more exciting talent on the horizon. These moves continue our commitment to providing them all with best-in-class personnel, infrastructure, and resources on and off the ice.

“Angus has an outstanding background in culture, care and development and has all the attributes required to build a model that will help our players get the best out of themselves and direct them to their next level.

“In just one year, Meghan has already proven what a valuable asset she has been to our hockey operations department, instilling her work ethic and expertise into our player development staff. She will absolutely flourish with the new responsibilities in this role.

“I’m extremely excited for how Angus, Meghan, Chris, and the entire Player Development and Performance staffs will commit to helping us realize success for our players and ultimately, the team.”

Duggan, 33, retired from pro hockey in October, 2020. One of the most successful players in international hockey history, the native of Danvers, MA has won eleven medals (eight gold & three silver) for Team USA in international play. In the Olympic Winter Games, she captured three medals: winning silver in 2010 at Vancouver and 2014 in Sochi (where she served as Captain), and triumphantly captured gold in a 2018 rematch with Canada at PyeongChang (where she was once again captain).

She also played collegiately at Wisconsin (WCHA) from 2006-2011 where she won the Patty Kazmaier Award, presented annually to the top women’s NCAA ice hockey player in her senior season. Duggan finished her career as the Badgers’ all-time leading scorer.

Following her time at Wisconsin, she was drafted eight overall by the Boston Blades in the 2011 Canadian Women’s Hockey League Draft, where she spent four seasons (2011-15) and won two Clarkson Cups (2013 and 2015).  She then spent two seasons with the National Women’s Hockey League with the Buffalo Beauts (2015-16) and Boston Pride (2016-17).

Duggan was part of the inaugural group that was named to the National Hockey League’ s Player Inclusion Committee last season and has also served as a member of the Professional Women’s Hockey Players Association (PHWPA) and the Women’s Sports Foundation as a Board of Trustees member.  Duggan has used her platform throughout her career for mentorship and motivational speaking with a focus on gender equality, diversity & inclusion, leadership, LGBTQ+ advocacy and teamwork.