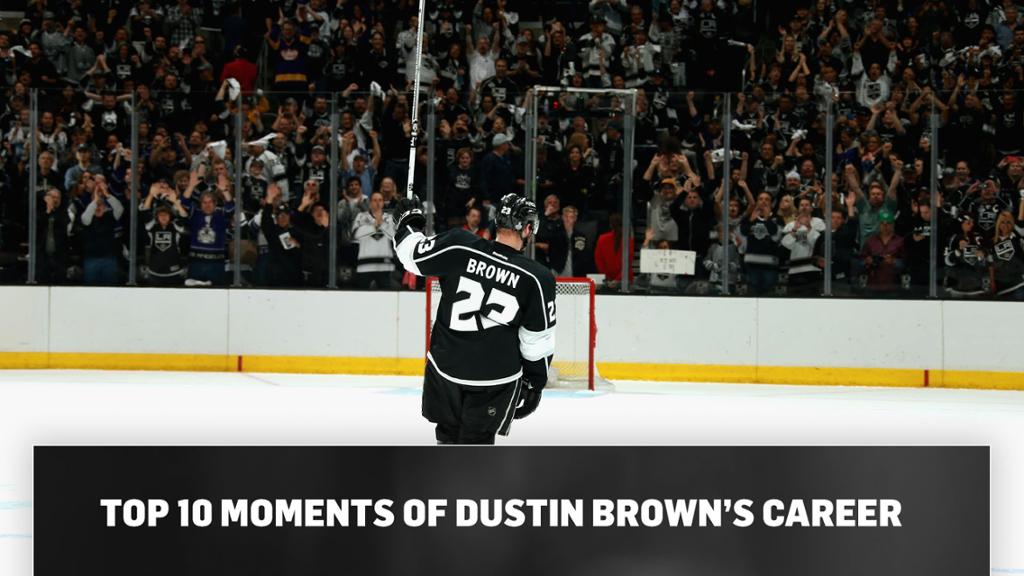 As we say thank you and goodbye to the playing career of Dustin Brown, many moments come to mind. Brown’s impact on the Kings and the community both on and off the ice has been evident since he joined the franchise in 2003 and will forever live on log beyond his final game. After 19 seasons, 1,296 games, 325 goals and 387 assists, the former Kings captain, all-time leader in games played in franchise history and two-time Stanley Cup champion has officially retired.

With 19 years of memories to pick from, we give you the Top 10 moments of Dustin Brown’s legendary Kings career.

On June 21st, 2003, the LA Kings drafted Dustin Brown 13th overall from the Guelph Storm of the OHL. The Ithaca, New York native joined the Kings Organization that fall and made his debut on October 9th, 2003 against the Detroit Red Wings.

Video: Dustin Brown reminisces about the day he was drafted

Tweet from @Kingstorian: On June 21, 2003, the @LAKings selected Dustin Brown 13th overall at the NHL Draft. In 17 seasons with the #LAKings, @DustinBrown23 leads the franchise in games played with 1,232, ranks sixth in goals with 316, and captained the team to two Stanley Cup championships.#GoKingsGo pic.twitter.com/ZYZJUAHO8B

On January 14th, 2021, Brown notched his 300th career NHL goal. In the season opener against the Minnesota Wild, Brown netted a hard-earned, power-play goal that gave the Kings a 3-1 lead. Brown is just one of 23 Americans with more than 300 career goals.

Brown won the Mark Messier NHL Leadership Award in 2014 – in recognition of his “to the player who exemplifies great leadership qualities to his team, on and off the ice during the regular season.” In 2011, Brown also won the NHL Foundation Player Award in 2011 as a player to “who applies the core values of (ice) hockey — commitment, perseverance and teamwork — to enrich the lives of people in his community.”

On January 13th, 2022, Brown recorded his 700th career point. Again on the power play, Brown gave the Kings the lead against the Pittsburgh Penguins with a nifty backhand-to-forehand move in front of the net. Brown would go on to finish his career with 712 regular-season points.

On February 22nd, 2021, Brown became the 14th American-born NHLer to play in 1,200 regular-season games when the Kings faced off against the St. Louis Blues. Making the night even more special, Brown scored a beautiful individual goal, helping the Kings to a 3-0 win on the road. Brown finished his career ranked sixth among Americans in games played (1,296 games played).

Video: [email protected]: Brown nets goal as he falls to the ice

5. Brown hits Henrik Sedin in Game 3 of 1st Round of 2012 Stanley Cup Playoffs

En route to the franchise’s first ever Stanley Cup, the eighth-seeded Kings had to go through the Presidents’ Trophy winning Vancouver Canucks. In the pivotal Game 3, Brown shelled out this clean hit on the Canucks captain and leading scorer Henrik Sedin. Brown later went on to score the game’s only goal in the third period, giving the Kings a 3-0 series lead.

On October 8th, 2008, at the young age of 23, Brown was named as captain of the Kings, the 15th in franchise history. When awarded the “C”, Brown became the youngest and first American-born captain in LA Kings history. Brown would hold the Kings captaincy for eight seasons, hoisting two Stanley Cups during his tenure as the captain.

On March 28th, 2019, Dustin Brown stepped on the ice for his 1,112th NHL game and became the all-time leader in games played in Kings history. In doing so, Brown surpassed LA Kings great Dave Taylor, who drafted Brown 13th overall as the Kings General Manager in the 2003 NHL Draft.

When royalty reigned again in 2014, Brown again had the honor of greeting NHL Commissioner Gary Bettman and the Stanley Cup after they defeated the New York Rangers in a Game 5 double-overtime thriller. Brown, for the second time in three seasons, hoisted the Stanley Cup above his head in front of a euphoric crowd in Los Angeles before passing it off to his teammates. Brown notched 14 points (6-8=14) in 26 games during the 2014 playoffs, including a game-winning goal in double overtime of Game 2 of the Stanley Cup Finals.

It might be goodbye from the ice for Dustin Brown, but the memories he’s left will last a lifetime. Thank you Dustin Brown for all that you have provided Kings fans for 19 years.

Tweet from @LAKings: This @DustinBrown23 @AnzeKopitar hug will make you feel things you never knew you could feel. pic.twitter.com/mm4Qj6gT8w