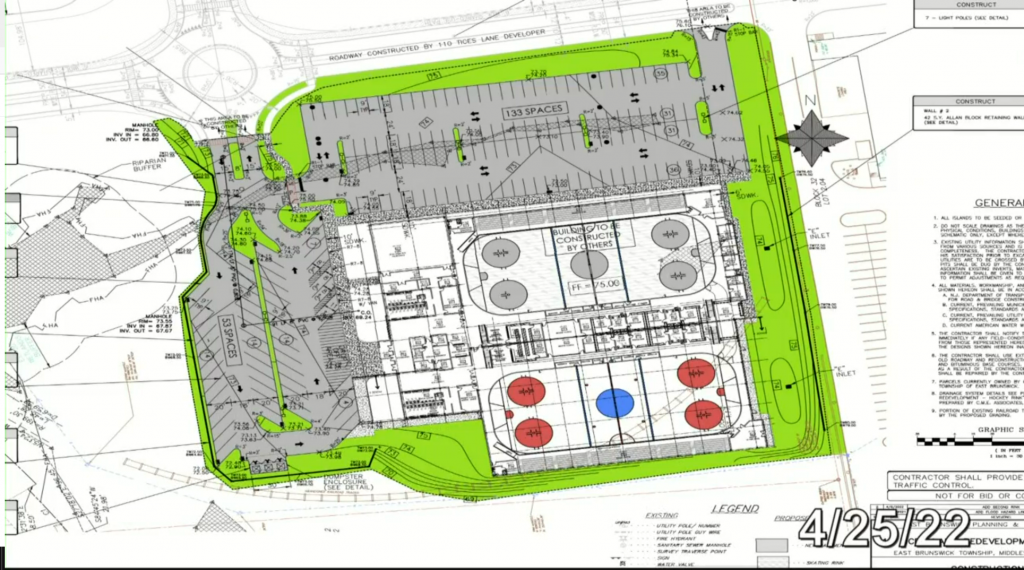 EAST BRUNSWICK – During the township’s council meeting on April 25, an informative presentation and public discussion was held to address the potential construction of an ice skating rink in East Brunswick.

The rink will purportedly be a multipurpose facility built on 8 acres of land near the previously demolished Wonder Bread factory.

Since its introduction, public sentiment on the proposed project has been divided. For some residents, the project offers an array of recreational activities and economic opportunities for the township. For others, the rink’s construction cost, timeline for completion and negative impact on traffic are reasons for concern.

In search of additional information, residents have used the public portion of prior meetings to voice their opinions at the podium. With questions about the feasibility and long-term profitability of the project still unknown, the presentation aimed to inform the public on new details.

Mayor Brad Cohen acknowledged the public’s frustration regarding the delay of updates and answers on the project. He attributed the delay to the tedious process of gathering expert information and conducting extensive research on other established rinks.

“The information provided today comes from extensive research of regional rinks, financial analysis, logistical and operations analysis, and discussions with professionals working in the field,” he said.

Cohen prefaced the presentation by stating that it served as an estimation of “expectations based on real data provided from experts and professionals.”

To provide further context and insight, four different presenters took the podium to address different aspects of the project.

Reissner mentioned that the proposed two-rink floor plan could use its secondary sheet of ice to accommodate more visitors, generate additional revenue, and host other sports. The plan also features a multipurpose area with spaces for food concessions, skate rentals and party rooms.

“This would also permit a flexible space with the potential to turn one rink into a multipurpose turf and/or court surface … so that one of them during the offseason can be utilized by different sports.

“Lots of possible uses, lots of flexibility and variety to look forward to. It’s definitely an exciting project,” he said.

According to Kipp, the northern rink will be 35,000 square feet and the southern rink will be 30,000 square feet. However, if certain construction plans are streamlined, the square footage, along with the total cost, could decrease. Thus, the estimated total cost for both rinks would be between $16.5 million to $19.5 million, with a construction time of 12-15 months if built simultaneously.

Angel Albanese, chief finance officer in East Brunswick, detailed the financial breakdown of the rink and how the township can finance the project. Albanese estimated that within three years of operation, the rink would generate net revenues of $250,000 to $350,000 per year.

To help finance the project, she stated that the township has several options that include applying for grants, borrowing temporary notes, and if deemed beneficial, long-term bonding.

“This is going to depend on interest rates, cash, and the operation. There’s a lot of factors that go into it. But as I said, we’re extremely fortunate to be in the financial position the township’s in. Our borrowing has been lower than, I think, in many years and we’re in a financially strong position,” Albanese said.

To conclude the presentation, Terry MacLaughlin, an ice rink development specialist from Massachusetts, shared his feedback with the council about their plans.

MacLaughlin was asked by Cohen if the township’s project was feasible or unrealistic. In response, he stated that the township’s numbers seemed correct in comparison to similar projects.

“The pro forma that I saw was inline with typically what you’d expect. … You have two sheets of ice here. You’re probably talking between $900,000 to $1 million worth of revenue per sheet, with expenses somewhere in the $750,000 range.

“But revenues typically increase about 6% to 7% a year, whereas expenses only increase about 3% a year. The revenue generators are usually the ones that skate year-round,” MacLaughlin said.

During the public portion of the meeting, several residents were still concerned about the long-term profitability of the project. Some were dismayed by the lack of public awareness surrounding the rink.

David Herrera, a resident of East Brunswick and a candidate for Township Council during last year’s election, spoke adamantly about the council’s handling of the project.

“I just want to state for anybody that hasn’t been here for every other council meeting, how backwards this is. The first meeting you had one line on a paper that said $575,000 to DMR Architects for a rendering. Then it got tabled when [Councilman Kevin] McEvoy and [Councilwoman Sharon] Sullivan, myself, and a couple people said, ‘That sounds like a lot of money.’

“Then it disappeared. Then two weeks later, everybody showed up from Spotswood in hockey jerseys … Wow, wouldn’t you know that after we called for fiscal responsibility for a month-and-a-half, we cracked open the books and found we can save $100,000 on a rendering?

“Don’t you think a presentation would’ve been beneficial to do before this was voted on? Because then maybe when it did go to a vote, everybody would’ve felt comfortable,” Herrera said.

Others also commented that the council should inform the public prior to making decisions. Some called for a referendum on the project to give residents an opportunity to vote on the issue.

However, prior to the presentations, Cohen explained to those in attendance that a referendum would be difficult. He said the township already offers a variety of programs and facilities that aren’t utilized by all residents, but are still necessary. He used several examples to illustrate the challenge of using public referendums as a precedent for making decisions.

“If we put out the public referendum to build a senior center, most people aren’t seniors. Does that mean we shouldn’t have one …? A public library? Well, a lot of people think you can get all the information on a cell phone, I don’t want my tax dollars going to a library.

“That’s not how we make decisions in the township about the projects that we want to do and provide for residents,” Cohen said.

After a lengthy public portion, the council then voted on a resolution that had been tabled since Feb. 28.