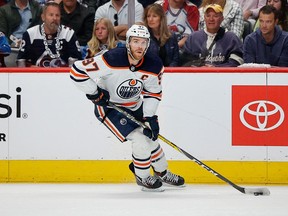 The numbers say the Edmonton Oilers are done.

Down 2-0 in a Western Conference Final they weren’t expected to even be in, the Oilers find themselves in a crisis from which the only escape is winning four of the next five games against a team that has dominated them for the better part of six periods.

Mathematically, it’s over. Only seven of the last 98 teams to trail 2-0 in a conference final have ever come back and won.

And, after giving up eight goals in Game 1 and being shut out in Game 2, there is very little evidence to suggest Edmonton will be the eighth.

So, maybe this is it. Maybe the Oilers are just losing to a better team. Maybe, with Darnell Nurse playing hurt and Colorado’s depth and a blue line a cut above Edmonton’s, their best just isn’t good enough.

We should find out Saturday. That’s when we’ll see everything the Oilers have to give. Game 3 will be their last stand. Their line in the sand. With their season on the brink, they are about to find out if they have what it takes to beat a 10-2 Colorado juggernaut that has been beating them at their own game.

If Connor McDavid, who has already shown in these playoffs that he can single-handedly turn a series in Edmonton’s favour, has another night for ages left in him, it will be Saturday night on home ice.

“We’ve been a real solid home team for the last little while, and we love playing in front of those fans,” said the Oilers captain. “We’ll get ourselves back in this series back at home here.”

That’s the last faint glimmer of hope left in this series, that coming home to Edmonton for Game 3 provides the shot of energy and adrenaline they need to keep this conversation alive.

It’s not out of the question. The Oilers are a better team than they’ve shown in this series and playing in Rogers Place can absolutely make a difference.

“Absolutely,” said defenceman Tyson Barrie. “We’re down two heading back to a rink that we love playing in. You guys have seen how excited the city of Edmonton is.

“We’ll be ready to put forth our best effort in a big bounce-back in front of a crazy building. We’re certainly not counting ourselves out of this one. We’ve got a lot of hockey left to play.”

Do the Oilers have enough game to come back in this thing? The early evidence isn’t good. The Avs routed Edmonton through two periods of Game 1, and the only reason it was close in the third period is because they let up and relaxed. To prove it, they score three goals before the Oilers even knew what hit them in Game 2 and then limited Edmonton to 11 shots over the final 40 minutes of a 4-0 shutout.

That’s a solid piece of playoff hockey right there, enough to rattle even the most secure challenger.

“I think we’re still a confident group,” said Oilers winger Zach Hyman. “It’s a series, right? This is how it goes. There’s momentum swings. It’s a rollercoaster. They defended home ice. So, we have an opportunity to go back, feed off our crowd and get the momentum back.

“We’ve done a really good job all year when our backs have been against the wall – pushing back, facing adversity. This is a big opportunity for us to do that.”

That’s true. And that’s the only reason nobody is writing the Oilers off yet. No team has been counted out more often this year than they have. They went 2-11-2. They got their coach fired. They lost a player a day to COVID for about three weeks straight. They were 10th in the Western Conference in February. They had Leon Draisaitl playing on one leg to open the Calgary series. They came back from 3-2 down against the Kings.

And here they are. One of the only four teams still standing.

So it’s probably best to see what they do at home, first. If Game 3 goes like Games 1 and 2 did, they won’t need anyone to tell them it’s over.

Until then, the Oilers and Rogers Place have one last chance to see if their best is good enough to make a series out of this.

“You’ve got to protect home ice,” said Hyman. “That’s huge. Starts with the first one, obviously. I think the first game showed that we can score against these guys. We’ll get back to that, get back to our game.

Sign up to receive daily headline news from the Edmonton SUN, a division of Postmedia Network Inc.

The next issue of Edmonton Sun Headline News will soon be in your inbox.