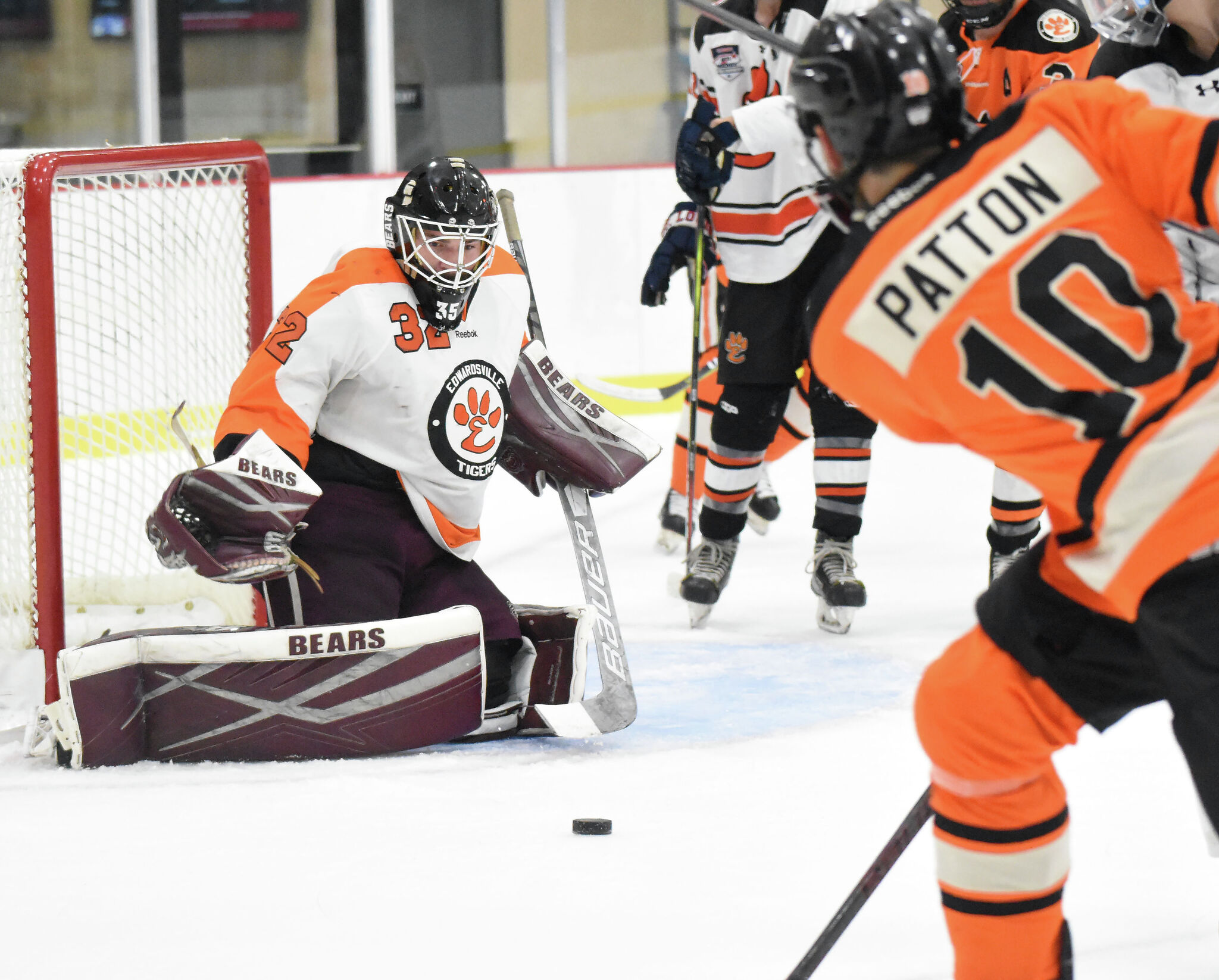 The Edwardsville ice hockey program has been hosting an Alumni Game every June for some time now.

Friday’s game, though, was a bit extra special.

Nearly 70 former Tigers took to the ice for the first time at the recently opened R.P. Lumber Center.

“A lot of us were texting in the group message that we wanted to be out here for this one because it was such a special day for the rink and community,” said Tyler Hinterser, from the Class of 2016. “We’ve all dreamed about having a rink like this just two minutes from your house. I hope this is something that helps take off hockey in the area.”

Hinterser, along with his brother Connor (Class of 2019), was one of 37 players to play in the second of two games on Friday. The first game, which featured 34 players, was for those who graduated from EHS prior to 2016. The second game was for graduating classes from 2016-2022.

Edwardsville High School coach Jason Walker (Class of 2002), who played in the first game, was thrilled with the turnout.

“It was awesome,” Walker said. “We do this Alumni Game every year in June and this is the most we have ever had. We had guys coming back from the very first year we had the program in 1995 all the way up to his most recent graduating class.  To have this game on campus in Edwardsville, it’s awesome.”

The R.P. Lumber Center hosted a soft opening on June 14 before opening to the public the next day.

Friday was the first day many of the former Tiger hockey players, who grew up playing at rinks around the area, were able to see Edwardsville’s new ice rink and facility, which includes a locker room for the program. A couple of dozen were able to skate on the ice during a ceremony two weeks ago.

“People wanted to see the new rink and be part of this,” Walker said. “It was really special to see their eyes light up when they walked in looking at the facility.

“All of them said they wished they would have had this, but that they are really happy for the kids now.”

Mitchell Oberlag (Class of 2019) enjoyed the reunion with his hockey family.

“It was a blast and a good time,” Oberlag said. “Having a rink like this and seeing all of the friendly faces you have been with, it was really special.”

Both games featured three periods of 20 minutes with a running clock. Neither game involved any checking or physical play, though, it didn’t stop Connor Hinterser from sacrificing himself to block a number of shots.

“Everybody had smiles on their faces and they were all having a good time. The vibe on the ice was a good one,” Oblerlag said.

The Hintersers and Oberlag played together on the Edwardsville White team.

Despite a five-goal game from Tyler Hinterser, the White team lost 8-7. Reilly Patton had a goal and three assists in the win.

“It was great to show off for the classes. It was also great to see all of the older and younger guys come together on a night to celebrate the success of Tiger hockey,” Hinterser said.

As for the first game, Walker said his team “lost badly.”

While bragging rights will carry over for the year, Walker said one of the most important things to take out of Friday was the celebration of the hockey program.

“It was a blast,” Walker said. “We had some of our current players acting as referees for the games. They were asking me questions about who was who and they were interacting with them. It was something that really brought the program full circle.”

The R.P. Lumber Center also helped complete the full circle for the program.

“It’s beautiful,” Hinterser said. “It makes you wish you were still in high school and had four more years to play here.”