‘Everyone forgets about you’: Erin Jackson on returning home after Olympics gold – The Guardian 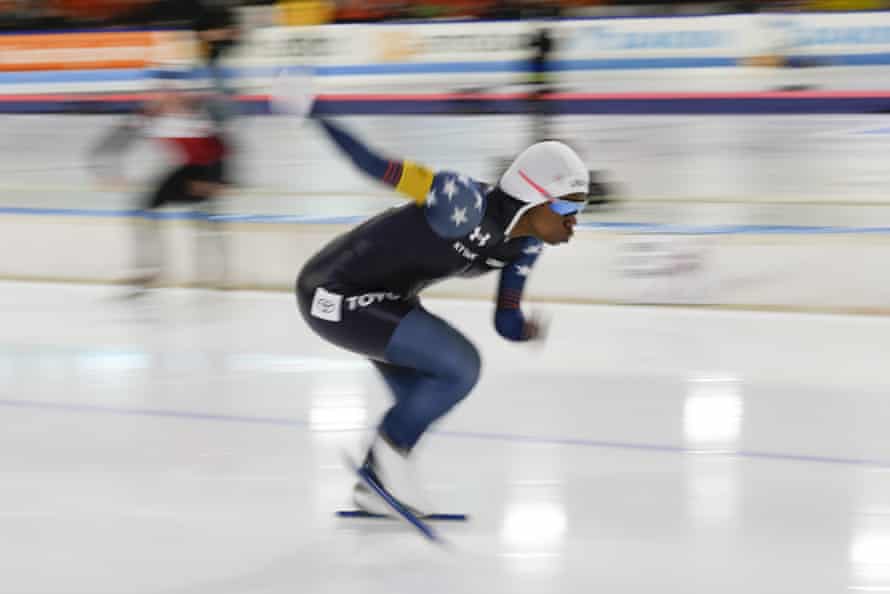 After making history in Beijing, the speed skater faces life after the spotlight, with sponsorships, training and changing the sport on her mind

Skate Mania isn’t much different than it was two decades ago when Erin Jackson first walked in. The sprawling wooden floor beneath fluorescent lights; the smell of brown leather roller skates; the snack bar; and the same teenage dreams inside four walls of painted cement and corrugated aluminum.

There’s little to suggest this timeworn roller skating rink on the outskirts of Ocala, Florida, is where one of the most compelling stories of this year’s Beijing Winter Olympics all began. Or that this small town in the thick of horse country has become the speed skating capital of America. Jackson plays a big role in that.

It’s been two months since she surged to Olympic speed skating glory in the women’s 500m, becoming the first Black woman to win gold in any individual event at the Winter Games. Roughly six years after stepping on ice for the first time in her life, the former inline skater completed the all-out sprint in a time of 37.04sec, ending Team USA’s extended medal drought in a sport it once dominated and earning her the title of world’s fastest woman on ice.

Jackson’s historic triumph – Team USA’s first individual speed skating medal of any color in 12 years and the first by an American woman since 2002 – was breathlessly touted, peppered with slews of interviews and shout-outs from Oprah Winfrey, Michelle Obama, Viola Davis and Gabrielle Union. She then emerged from the post-Olympic maelstrom to win the last two 500m events of the year at the World Cup finals in the Netherlands in March, finishing with six wins from 10 races to clinch the season-long title and remove any lingering doubt to her claim as the world’s best sprinter.

It would seem Jackson’s improbable backstory – a Black star in an almost entirely white sport, hailing from a warm-weather city more than an hour’s drive from the nearest ice rink – and unfathomable run of success as a relative novice would be catnip for corporate sponsors. Instead, for all the clamor over her trail-blazing achievement on the world stage, Jackson says that she’s added no new sponsors since Beijing.

“The thing with Olympic sports is that – how do I say it diplomatically? – people don’t care a whole lot as soon as the Olympics are over,” she says, smiling. “Right after the Games, it’s tough. Where’s the money coming from? How are we going to keep paying rent? Because it does go kind of dark after the Games. Everyone forgets about you.”

What makes Jackson, 29, feeling unnoticed soon after the Games hard to understand is that she can’t help but stand out. The Winter Olympics from their inception nearly a century ago have been an overwhelmingly lily-white affair. Despite long-running efforts by the International Olympic Committee to increase diversity through quota systems, not enough has changed to bring more people of color into Winter Olympic sports.

“I just think it’s really strange to imagine that it’s 2022 and I’m getting the first individual gold medal by a Black woman ever in the history of the Winter Olympics,” Jackson says. “I feel like that’s a pretty strange thing for the year that we’re in.”

She says cost and exposure are two main reasons the sport of which she’s reached a pinnacle in five dizzying years has failed to attract more athletes of color, resulting in a Team USA that doesn’t reflect the population it represents.

“If I didn’t have the help in the beginning with that sport, I wouldn’t have had a future in it. It’s expensive. But I was lucky to have people like at the rink right over there, who would donate skates and equipment and wheels,” she says.

Had it not also been for a coach with a shrewd eye for talent – and an unorthodox speed skating background of her own – Jackson’s meteoric ascent might never have left the launchpad.

Jackson’s earliest memories of life involve skating. She recalls clacking around in a pair of plastic adjustable roller skates that buckled into place on top of her shoes in the driveway of her family’s Ocala house. She found a second home at the open sessions at Skate Mania and spent two years in artistic skating – figure skating on wheels, essentially – but her instinctive urge to peel away at breakneck speeds rather than focus on her jumps caught the attention of Renee Hildebrand, who for more than three decades has trained Ocala kids into world-class inline speed skaters.

Jackson credits Hildebrand, a former inliner who hasn’t skated on ice in more than 20 years, with helping establish both a versatile technical background and the mental fortitude for Olympic-level competition. “The mental game is a really big part of what we do, especially with a sport that’s so technical and so individual as speed skating.”

By the time Jackson was 10, she was training with two of Hildebrand’s more seasoned Ocala-born inline proteges – Brittany Bowe and Joey Mantia – who were already racking up inline world championships around the globe.

By 15, Jackson had won the first of four inline world titles. A self-described “rink rat”, she also stood out in the rough-and-tumble world of roller derby, excelling as a jammer with the Jacksonville RollerGirls of the Women’s Flat Track Derby Association. But as Jackson’s trophy case filled and high school graduation drew near, she faced a gnawing reality: there are no Olympic medals for inline skating.

She was courted by US Speedskating’s talent scouts to trade her wheels for blades, a path taken by Bowe and Mantia (and the epochal Apolo Anton Ohno before them), but initially turned them down. She went to school instead, enrolling at the nearby University of Florida to pursue an engineering degree. But the Olympic itch returned after she watched Bowe and Mantia represent the United States – and Skate Mania – at the 2014 Winter Games in Sochi. “It was always in the back of my mind,” Jackson says.

She first stepped hesitantly on to an ice rink during a trip to the Netherlands in 2016, an experience she describes as “Bambi on ice”, a moment captured on a video that NBC aired endlessly during their Olympic telecast. A year later, she decided to fully commit with her sights fixed on the 2022 Olympics.

“I didn’t like not being good at it. When I first got on the ice, I was bad and I didn’t like it. I was the slowest one on the team. I didn’t have the feel for the ice, and that’s kind of the hardest part with the transition, that the ice and the inlines feel so different.”

Jackson finished 24th out of 31 skaters in the 2018 Pyeongchang Winter Olympics, an experience that was enough to convince her she was on the right track. Since then, Jackson has become dominant in the 500m, the shortest, least technical of the long-track races. In the run-up to this year’s Olympics, Jackson reeled off a string of wins on the international circuit, becoming the first Black American woman to win a speed skating World Cup race – her previous best finish was ninth – and positioning herself as a serious contender for Beijing.

“It all happened really quickly,” Jackson says. “I’m sure a lot of the other competitors were looking forward to the Olympics for a lot longer than I was. Because going into the season, I had no idea where I stood.”

Then on the doorstep of Beijing, Jackson thought her Olympic dream was dashed after a costly slip at January’s US trials appeared to cost her a place on the team. Bowe offered Jackson her spot, a gesture that ultimately proved unnecessary after several nations returned their quota spots and Bowe was able to compete in the 500m as well.

That act of generosity only strengthened their bond. When Jackson won the gold in Beijing to become America’s first sprint queen since Bonnie Blair, some of the loudest cheers in the nearly empty arena came from her longtime friend and mentor.

“I think I kind of blacked out,” said Bowe, who earned bronze in the 1000m four nights later. “I screamed so loud I almost passed out. I couldn’t be more proud to be her teammate and I’m just happy to be part of the puzzle.”

Jackson hopes her headline-grabbing success on the global stage can show what’s possible and broaden the talent pool for speed skating and winter sports in general.

“Media isn’t exactly my favorite part of the job, but it’s important because you have to get the story out there. So that’s what I’m enjoying doing, trying to get more people to know that this sport is out there. And then from there, raising money to help them get started,” she says.

She’s been partnering with Edge Sports, a non-profit that works to normalize Black and brown bodies on ice rinks and ski slopes around the country, to establish a chapter in Utah. For the last five years, she’s called Salt Lake City home, not far from the Olympic oval where she trains.

“When you think about the sports that typically have more minorities represented, it’s the sports where you can just pick up a ball and get some shoes that are a lot easier for someone to get into,” she says. “When you think about me getting into a sport like long-track speed skating, it’s very unlikely, because it’s something that my dad couldn’t have done and probably didn’t even know existed.”

Her father, Tracy, moved from Ocala to Salt Lake City last June. Her mother died when she was a senior in high school, but her dedication to her father, her education and her skating provided a source of strength. “I really relied on those three and life got better,” she says.

Since graduating with honors from the University of Florida in 2015 with a degree in materials science and engineering, Jackson has added an associate’s degree in computer science and is working toward another associate’s in kinesiology. “I want to get into biomechanics, which is kind of broad, but maybe something like prosthetics. It would be cool to do something that could help the Paralympic movement,” she says.

Though she considers herself first a student and then an athlete, Jackson believes that she’s only scratched the surface of her potential. That includes branching out to the 1000m – “so I can do more than 37 seconds of racing at the Olympics”, she says – while staying on top at her signature distance. After a few months of rest, Jackson will gear back up for the World Cup season beginning in November. And the 2026 Winter Olympics in Milan/Cortina d’Ampezzo are both far off and right around the corner.

“I feel like I can’t really stop now because just two years ago, I wasn’t good still,” she says. “I have a lot to work on. It’s only the beginning.”