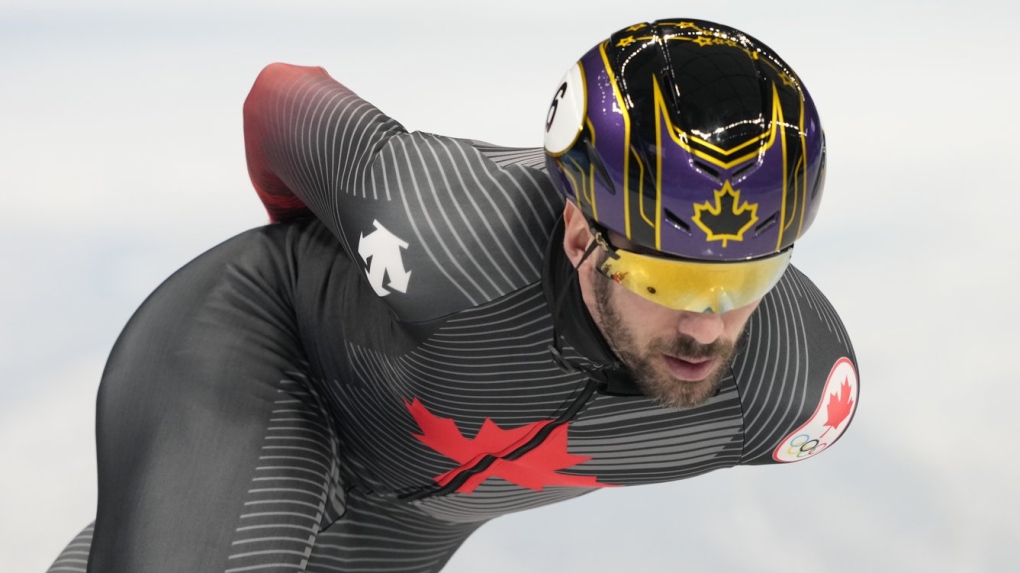 Charles Hamelin was a couple of days removed from becoming Canada’s most decorated winter Olympian and was on his flight home from Beijing.

Connecting to the airplane’s Wi-Fi midflight, the first post that popped up on the short-track speedskater’s phone was a congratulatory tweet from Formula One superstar Lewis Hamilton.

Hamelin had raced at the Beijing Olympics in a purple and gold helmet, painted by artist Stacy Glaser, that was both a tribute to his two-year-old daughter Violette and in honour of one of his sporting idols, seven-time world champion Hamilton.

“Love the helmet @Speedskater01. Congratulations on all your success in Beijing,” Hamilton tweeted to his more than seven million followers, with a gold-medal emoji. The post has almost 64,000 likes.

Hamelin was touched by Hamilton’s kindness. A sporting hero to so many in his own right, in that moment, the five-time Olympian was just an overjoyed fan.

“At first I thought no, it’s probably a fanpage. But it was really him,” Hamelin said. “He’s an idol for me, so for him to take the time to respond to me and tweet about it … it just made me think he’s not only a great athlete on the track to have achieved what he has, but he’s also a great human.”

The native of Sainte-Julie, Que., will be trackside for this week’s Montreal Grand Prix, as Formula One returns to Canada for the first time since 2019.

Hamelin was Canada’s flag-bearer — along with women’s hockey superstar Marie-Philip Poulin — at the opening ceremony in Beijing, where he tied long-track speedskater Cindy Klassen’s Canadian Winter Olympic record with his sixth career medal — including four gold.

He and Hamilton, F1’s all-time leader in victories with 103, have dominated their sports like few others.

The similarities don’t end there. Both sports are about racing on a razor-thin edge between glory and disaster.

Short-track speedskating, Hamelin said, is the world’s fastest sport on a flat surface that doesn’t include technological help such as a bike, a car, or klap skates (in long-track speedskating). Skaters navigate the tight 111-metre track at a gravity-defying 60 kilometres an hour, virtually face-to-backside in a tightly packed group.

“The passes are so tight and you depend on your opponents to finish the race on your two skates, if there is someone doing a crazy pass or something dangerous, you can be a victim of what he’s doing, a little bit like in F1,” said Hamelin. “You’re doing your thing in your car and all of a sudden something happens, a bad pass, a stupid move from someone, and if you go into his car, well your race is done.

“In terms of reading the opponent, like when you want to pass … and understanding the track, how to be efficient, how to be fast, how to be defensive, to not be passed by other skaters behind, it’s all in the same mindset and the same way of skating. I find a lot of similarity between the two sports.

“It’s like us skating on a rink — but in a car at 300 kilometres per hour,” laughed Hamilton, who is a big fan of this season’s new helmet-cam in F1 broadcasts.

Athletes must be fearless in both sports to succeed, Hamelin added.

“If you’re scared to go in a turn in short-track, you’re never going to hit your best of the best that you can give on the ice, and there’s someone else that will give it 100 per cent, and will take your place, and it’s the same thing in F1,” he said. “As soon as you’re scared of going into a turn or passing someone, well, you’re out of the sport.”

Hamelin, who has driven a Lamborghini on a closed racing circuit, has been a Formula One fan since fellow Quebecer Jacques Villeneuve, the F1 world champion in 1997, was Canada’s king of auto racing. Hamelin and his brother Francois, also a retired short-tracker, and their dad attended the Montreal race most years. They still watch the races every weekend on TV, texting each other to discuss the highlights.

He likes Hamilton not simply because he’s been such a dominant driver for years, but for how vocal the Brit is about numerous social issues.

“He’s behind a lot of great causes,” Hamelin said. “He’s not scared of saying what he’s thinking about the world.”

Earlier this week, Hamilton defended Sky Sports F1 commentator Naomi Schiff, who was bullied on Twitter about her credentials. Schiff, whose parents were Belgian and Rwandan, was a professional race car driver.

“She’s been a great asset since joining & we should welcome more representative broadcasting with open arms,” Hamilton tweeted. “Still have a long way to go to change these attitudes in sport.”

Hamelin said life has been busy since he retired after the world championships this past spring. There’s been plenty of media obligations since he capped his illustrious Olympic career with a gold in the 5,000-metre relay. His sponsor Red Bull flew him and Red Bull’s other Beijing and Tokyo Olympic gold medallists to the Monaco Grand Prix in late-May. Hamilton was eighth there.

He’ll be at the Montreal race on Sunday when the series makes it celebrated return to Canada after being cancelled two straight years due to COVID-19.

The following weekend, he and fiance Genevieve Tardif are finally getting married after the pandemic cancelled their wedding plans two years in a row. They’re travelling to South Africa for their honeymoon.

Hamilton, meanwhile, will be hoping for a podium finish in what’s been an off-year for the 37-year-old Mercedes driver. Hamilton has just one podium in eight races, and is sixth in the drivers points. He was fourth last weekend in Azerbaijan, complaining of extreme back pain afterward.

Hamelin said he’d love to meet the driver, and perhaps even give him a token of his appreciation.

“It would be an honour for me to give him one of my helmets.”

– This report by The Canadian Press was first published June 15, 2022.