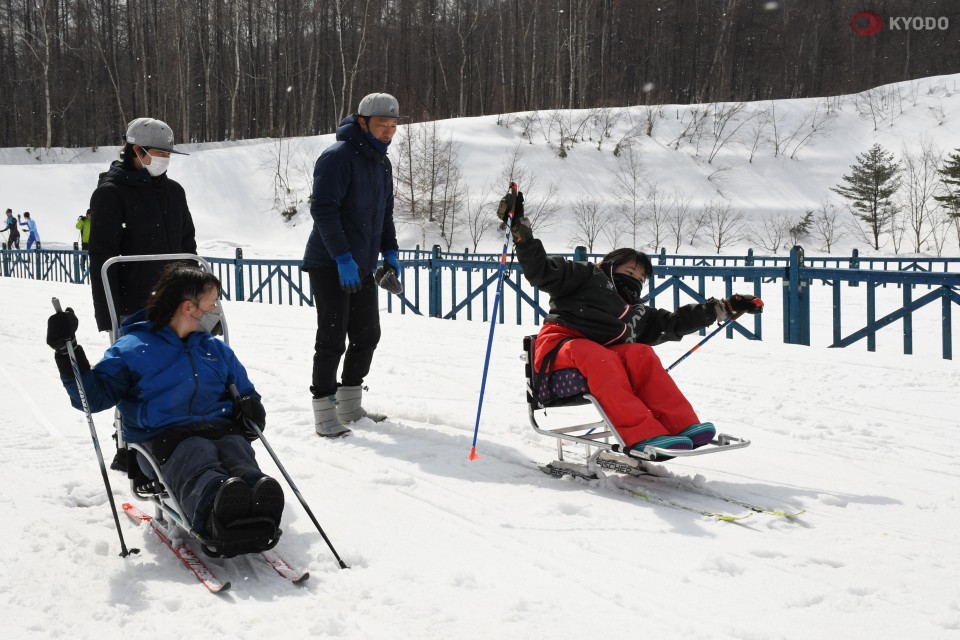 Hoping to add to Japan’s recent Winter Paralympic success, clubs in the northernmost prefecture of Hokkaido are trying to entice more people with disabilities to snow and ice sports.

Pitching winter para sports as an inclusive way to have fun and stay healthy, clubs are organizing activities such as sit-skiing for people with and without disabilities.

At a skiing area of the Hokkaido Adaptive Sports club in the prefectural capital Sapporo, 18-year-old Mana Nakoshi recently worked on her sit-skiing skills.

Nakoshi, whose lower body is paralyzed from spina bifida, a congenital condition causing a gap in the spine, maneuvered a sit-ski comprising a pair of cross country skis attached to a chair.

“It’s the first time I didn’t fall going downhill,” said the smiling teenager, who practices each week at the club founded in 2019.

During practice, an instructor told her, “You won’t improve until you understand why you fall.”

Mana’s 44-year-old mother Rina said instructors at the club find the right balance between encouraging their students and pushing them to achieve their best.

“People with disabilities tend to be thought of as admirable simply if they try,” Rina said. “I am grateful she receives strict instruction appropriate for her age.”

She added, “As she’s always had her parents by her side since childhood, I hope she can create her own independent world through sports.”

The HAS club has 42 members, including those aged 4-25 with disabilities and members without disabilities. It offers year-round activities, including wheelchair basketball.

“In the United States, even people without disabilities will join in para sports, but that’s still rare in Japan,” said Yuta Saito, a representative of HAS.

The club is hoping to offer training to the Japanese team for the 2030 Winter Games, which Sapporo is bidding to host.

The biggest obstacle for para athletes, especially those involved in winter sports, is the cost of participation.

According to a survey of 169 Japanese Paralympians from the 2018 Pyeongchang Games and 2021 Tokyo tournament, 43.8 percent said the expense was the hardest part of competing. The personal burden for the Pyeongchang athletes was nearly double that of Tokyo, with 16 percent spending more than 2.5 million yen ($20,500) a year.

With relatively few domestic suppliers, HAS has been developing equipment with support from the corporate sector.

Sapporo, the 1972 Winter Games host, has put extra effort into teaching disabled skiing. Since fiscal 2018, it has acquired equipment for 19 people worth some 9.2 million yen. It rents the gear to ski schools that teach elementary and junior high school students, and also provides instructors.

One of the special devices allowing people with disabilities to enjoy the slopes is the bi-ski, which features a pair of alpine skis attached beneath a seat.

It can be operated by a guide, enabling its use by people with much-reduced limb mobility. It is also used by people without disabilities, who say they enjoy riding the slopes closer to the snow, with a low line of sight.

Sapporo has been running training courses for bi-ski instructors since 2018.

Toshikatsu Kobayashi, an adviser with a Sapporo-based skiing association for people with disabilities, said competition was not the primary purpose of the bi-ski.