Georgia’s Safina and Berulava: ‘We did it.’ – Golden Skate 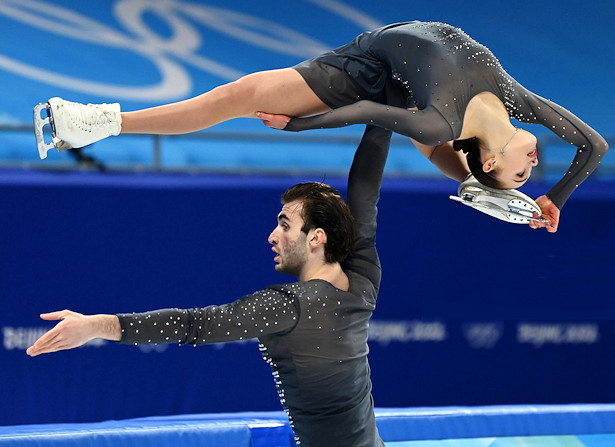 Georgia’s Karina Safina and Luka Berulava perform their Short Program at the 2022 Olympics in Beijing, China.

When pair skaters Karina Safina, 17 and Luka Berulava, 19, teamed up in March 2021, they could not have imagined that one year later they would have competed at the Olympic Games. Not only that, they finished fourth at both the 2022 World and European Figure Skating Championships and won a historic first World Junior title for Georgia. The teenagers were on the fast lane from the very beginning of the season, claiming a silver and a bronze on the ISU Junior Grand Prix series and grabbing one of three available Olympic spots at Nebelhorn Trophy where they placed third.

“To be honest, I could not imagine that everything would go like this,” Safina admitted. “It was the best that has happened recently. Obviously, you have dreams and these dreams came true. Everything I was hoping for this season happened.” Berulava agreed. “It was our plan and we more or less fulfilled the plan. We did it.”

The team started out in Perm, Russia, where they were training under coach Pavel Sliusarenko. Both are Russian-born: Safina comes from Tcheliabinsk in the Ural mountains, while Berulava is originally from Moscow. However, he has Georgian ancestry and has competed for Georgia since the 2019-20 season.

“When we had the idea to pair Karina and Luka, we thought that it would be difficult to take them to a level that makes it possible to get out of Russia,” Sliusarenko said. “At first, we had plans for Junior competitions and everything went well.”

“Obviously, the circumstances contributed to them winning the (Junior World) title, but they have worked very hard every day,” the coach added, referring to the fact that Russian skaters had been banned from competing at the ISU World Junior Championships.

However, looking at Safina and Berulava’s performances and scores from Junior Worlds, they would have had a good chance to win the title even if their Russian competitors would have been present. Not to mention that the Georgians have much more senior-level experience than the Russian juniors.

“It has been a difficult season, but the main goal when they were paired was to get to the Olympic Games,” Sliusarenko explained. “This is not only the dream of the athletes, but also the dream of the coach. As the coach, I realized that they could make it and that they would not look out of place there.”

“When we started, we just worked very hard and hoped for the best,” Safina noted. “We mastered the elements quite quickly. It was harder to skate the whole program with all elements.”

The skaters and their coach were only disappointed with their result at Worlds. The team did well in the Short Program, but there were some small mistakes in the Free Skate.

“We had a realistic medal chance,” Sliusarenko noted. “It has been a long and a hard season and unfortunately, it wasn’t enough (for a World medal). Other than that, it was a very successful, unpredictable season and I want to thank my skaters for doing the work that we had discussed.”

It was indeed a very successful debut season overall and the athletes gained a lot of valuable experience.

“The Olympic Games are a completely different competition regarding the atmosphere,” Safina pointed out. “You would think that you’d be more nervous because it is the Games, but in fact, it was very friendly, calm and I felt more confident.”

“I was more nervous at the junior competitions,” she added, laughing.

“I think we got the experience on how to pull ourselves together and to deal with nerves,” Berulava said. “As Karina said, the Olympic Games were very relaxed for us, maybe because of our age. We are still juniors and probably didn’t fully realize how important this competition is and therefore it was somehow easier for us. But in general, we had one competition after the other and I was quite exhausted. I just wanted the season to end.”

The newly-minted World Junior Champions are very ambitious and even critical and demanding of themselves.

“I think it is a good quality if you always want the maximum, but sometimes it might affect our relationship in the pair,” Safina observed. “Definitely it is a good quality. You won’t get far without maximalism,” Berulava agreed. “However, if you are exaggerating, it is not good either. You need to find the way in between.”

The next season is on the horizon and the team wants to continue their winning ways. They hope to attend the senior-level ISU Grand Prix, but want also to come back to Junior Worlds.

“This will be our last time as Karina is aging out,” Sliusarenko noted.

For the new season, the team plans to collaborate with Eteri Tutberidze and Daniil Gleikhengauz to create their new programs.

“Our programs for sure will look different. We’re changing both programs,” Sliusarenko said. “Maybe we’ll also make some changes to the solo jumps, put in new combos, because you have to continue to develop.”

The skaters are involved in the music choice and make suggestions. While Safina feels that they have not yet found their personal style, Berulava thinks otherwise.

“Our style is something not too calm, but fluid and interesting.” The coach agreed: “I think a calm music with a slow start and that keeps building is suiting them. We had that this year in the short and the free. However, perhaps Karina is right that they did not find yet their real, personal style as there was not enough time. The first time they skated together was only in March 2021.”

Safina and Berulava want to continue to train mainly in Perm where Sliusarenko is based and they are grateful for the support they receive from the Georgian Federation.

“We want to thank the federation and its president Maka-Mariam Giorgobiani,” the coach said. “Georgia is not a big country, but they tried to do the best for the kids. We hope that these (Junior World) gold medals, the first in history as far as I know, will push the development of Georgian figure skating. Maka is doing a lot for that. Without her support, we would not have achieved these results.”

After a short break at home, the skaters went to Japan where they are currently taking part in the show Fantasy on Ice.

“We are performing in twelve shows,” Berulava said.

“It is great that the kids get the opportunity to perform with some of the big stars. This is helping their development,” Sliusarenko concluded.