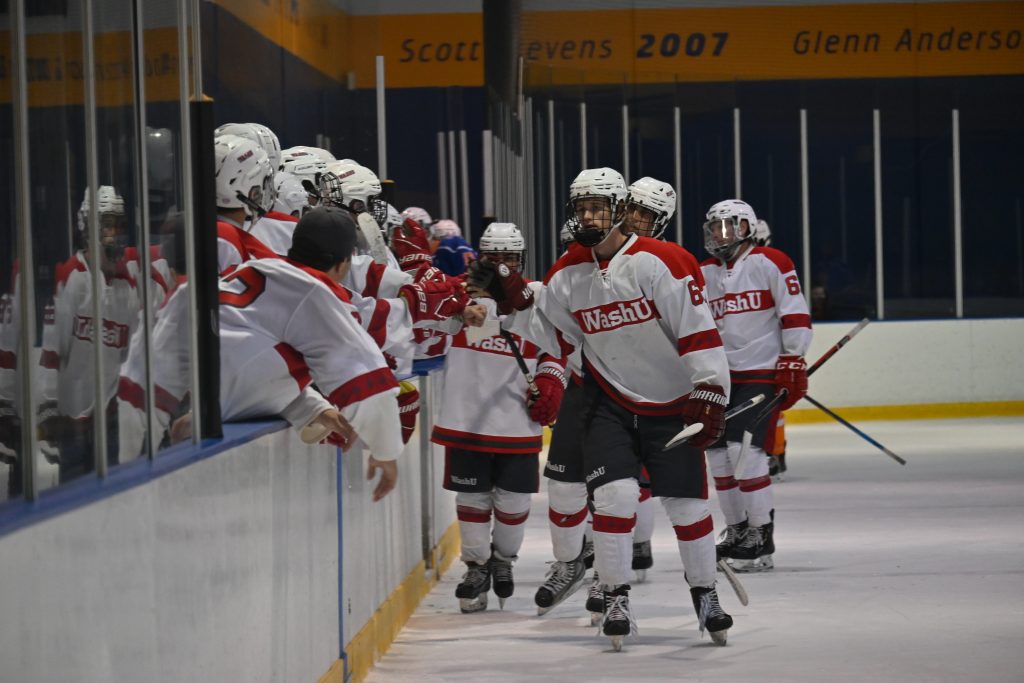 With those words after a flawless start to the season, sophomore Sammy Greco unquestionably summed up the team’s end goal and the sight that his team is chasing after coming frustratingly close last year.

WashU men’s ice hockey started the year in an even better fashion than last, remaining undefeated and averaging over 5 goals a game. They’ve only allowed around 2 shots a game, staying aggressive at the net.

The secret to their success: returners from last year. That experience has spurred confidence and faith in the team to perform their best every time they lace up.

Last season saw the Bears ranked as high as 12th within the American Collegiate Hockey Association D3 rankings. They began the year undefeated in their first four games, and they continued to win 3 of their next 5. The season ended with the Bears ranked 29th nationally with a commendable 7-2-1 record heading into playoffs.

However , playoffs began, and WashU’s dreams of nationals were soon scattered with a 5-0 loss to #3 ranked Arkansas. “They were a little bit better than us because they had been older and more experienced, and so when we have young guys out for the first time, it’s hard to match their intensity plus speed, ” said sophomore Kenta Kato.

But this 5-0 defeat was still a step forward for the program. In 2019, WashU had previously played Arkansas, and throughout that 2-game series, they lost by a combined score of 29-3.

So losing by only 5 to the 3rd ranked overall team felt, a little bit, like a victory. It’s a moment that sophomore Cole Hannan remembered as “a big step for the program—one which felt like everyone was proud of what we accomplished. ”

Since this loss, WashU has only gotten better by being able to keep most of the team intact, alongside adding a new, highly-talented freshman class. As head coach Chris Nikonovich noted, “We have some fresh faces on the group this year that are outstanding, and they have come in and gained the trust and confidence with the rest of the team. I feel like this team is cohesive and has an excellent relationship overall. ”

The relationship between the freshmen and the other players was nurtured within the locker room, as the returning students instilled values that were cornerstones of the team. With a sign hanging over the door saying “Make It a Great Day, ” the newly-revamped team started to focus solely on their upcoming opponent and delivering their best possible performances. This focus has proved incredibly important to the season, as the Bears have kept their momentum going, evident by their current #14 national ranking, 6-0 record, and their confidence at an all-time high.

As WashU heads into its final three games of the season, the group will begin preparations for a playoff stint they are confident will be more successful than the final. With much more experience under their belt, this team “knows what to expect, ” Hanan said. “We know what we have to be this year and we’re practicing harder. We’re playing harder. We need to play more physically, and we’ve been doing that. We’re ready for them. ”