Ice skating in the peak of summer? For Delhiites, that’s a yes – The Week 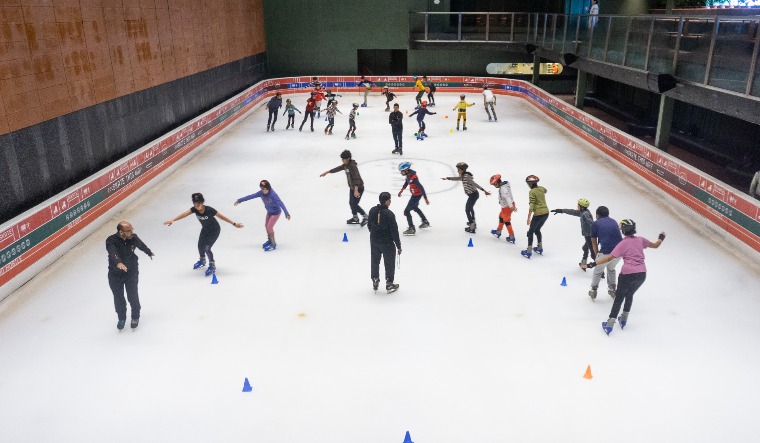 An arabesque in ice skating entails extending one free leg behind the body so it reaches the height of the hip in a straight line. “Death spiral” has two partners spin each other, taking turns to lower themselves onto the ice. In a “shotgun spin,” a free leg is help upward by the ankle; it almost looks like pointing a gun. And let’s not forget all the delicate footwork with a sequence of edges, turns and hops.

Ice skating has an elegant library of terms to identify its many glistening moves. Watching skaters effortlessly glide down the rink in perfect self-possession cutting the cleanest circles on ice is pure poetry-in-motion. American poet EE Cummings once wrote on Skating, “Gleam of ice, and glint of steel, Jolly, snappy weather; Glide on ice and joy of zeal, All, alone, together.”

On a sweltering Sunday in late March, you’d least expect to think about these terms when you enter a large, busy mall in Gurugram. But such is the oasis that is iSkate by Roseate in the middle of a dust storm that is summer-ready Delhi-NCR.

Trainers dressed in black smoothly glissade down a giant ice rink inside Ambience mall where iSkate is perched on the 6th floor. Imagining a state-of-the-art ice skating rink inside a mall, used by both serious athletes and shoppers, might seem a little far-fetched at first, but iSkate by Roseate is India’s only all-weather indoor ice skating rink, and also the largest one on natural ice at about 15,000sqft.

It is leading the pack in promoting winter games like figure skating, speed skating and ice hockey. And iSkate also promises to be one of the best bets to cool off this summer beyond indulging in ice packs and cold showers.

Since it reopened in October last year—fully kitted out with a co-working space and a plush cafe-patisserie, Roasted by Roseate—iSkate will now offer ice hockey training to anyone who might be interested to pick up the sport.

“This is a one-of-a-kind programme in India. You don’t get to learn ice hockey easily. Especially if you live in the plains. It is not a common sport in India and it is very tough to find ice hockey training throughout the year. But iSkate is the only venue in India where you can find ice hockey training all through the year. And this summer, aside from the ongoing training programmes, we will open it out to people who may be interested in ice hockey just so they can begin playing,” says Karan Rai, business head at iSkate by Roseate.

“The training will be imparted by national-level coaches and former players associated with the Ice Hockey Association of India,” says Rai. Prices are likely to start at Rs1,200 per session.

iSkate has already been hosting events like the National Figure Skating Championships, selections and trainings, and frequently invites Olympian coaches from countries like Korea, Austria, Canada, Australia and Russia to teach the basics of figure skating, long stead and short stead skating.

“Winter Games are still something which has a huge potential, but it requires constant growth. By being situated in a mall, the recreational, as well as the community aspect of an ice skating rink, is met. You are in a setting where you have the footfalls and get people more interested in the sport. This is not possible in a standalone rink,” says Rai, highlighting the reason why setting up the rink in a mall makes complete commercial sense considering the high costs of maintenance.

The iSkate rink, a unit of Bird Hospitality Services, is 30 meters by 80 meters. It can accommodate up to 150 ice skaters at any given time. A typical day at iSkate sees a footfall of 400-500 people on weekdays and 700 on weekends. An hour of ice-skating costs Rs800 per person.

“We have been running iSkate since December 2011. It was shut for renovations in the pandemic, during which time an Indian team worked on rebuilding the ice-skating rink. Otherwise, we usually have experts coming in from Canada and the US,” says Rai, who has been at the forefront of building winter games infrastructure in India for over a decade now.

“It is very hard to maintain an ice skating rink in India because it is very hot. There’s a lot of humidity, which forms clouds that rise up, hit the ceiling and fall as rain. The rink is then spoilt. So there is a perfect balance required between the air and the refrigeration unit. It is a complete ecosystem inside,” says Rai. He wants to build world-class ice skating rinks in other metropolitan cities, too, to tap into the wealth of winter sports enthusiasts.