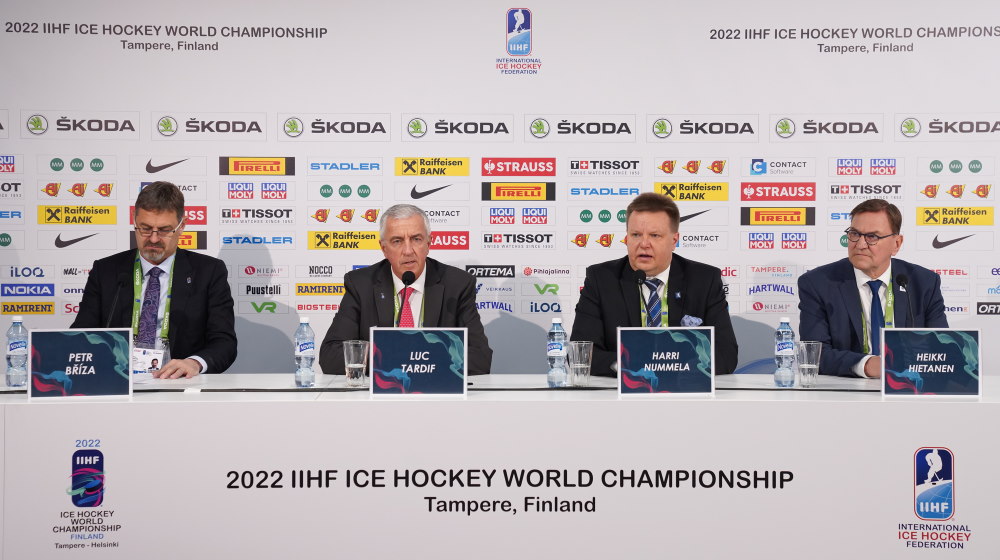 On the second-to-last day of the 2022 IIHF Ice Hockey World Championship – about 80 minutes prior to the start of the first semi-final game between host Finland and the USA – the IIHF held its annual press conference with organizing committee. This year’s participants were IIHF President Luc Tardif, IIHF Senior Vice-President Petr Briza, Finnish Ice Hockey Association President Harri Nummela, and head of the Organizing Committee Heikki Hietanen.

“If I may summarize our feelings at this point, from the point of view of the FIHA and the Organizing Committee, I would say that we’re in a positive mood because we were able to stage this tournament without any restrictions concerning spectators,” said Nummela. “It wasn’t until two or three months ago that we knew that we would be able to play a ‘normal’ World Championship.”

“We’ve had very good feedback from the teams, which are the most important element of the tournament,” said Hietanen. “We’ve also had crowded arenas and good atmosphere in a sustainable way.”

Tardif started by praising the outstanding organization of this tournament, particularly in light of the necessity to move the Helsinki venue from Hartwall Arena to the older Helsinki Ice Hall.

“While it’s true that everything in the world isn’t back to normal, but I’m confident in the future and this tournament is a step in that direction,” said Tardif. “And we’re so satisfied that we’re coming back here next year.”

“I would like to express my credit to the organizing committee for handling the situation of moving to another arena just a month before the championship started,” said Briza, who was in charge of the directorate in the Helsinki group. “The teams liked the arena that was built in 1966 – it smells like hockey. We had some challenges but everybody cooperated, and of course for the one situation with the fire in the building, I would like to thank the Helsinki Fire Department and the organizing committee, who handled the situation very quickly.”

The first question from the press was about the timeline for the reintegration of Russia and Belarus into the World Championship program, in light of the recent news that they would not be participating in 2023.

“From the beginning, we’ve tried to adapt to the situation,” Tardif began. “We waited as long as possible to extend the suspension, hoping for a better situation, but that wasn’t the case. Right now, there’s nothing else we can do.”

Tardif went on to talk about the logistical issues with the exclusions of these countries, with how all of the divisions are affected – including promotion and relegation – and their return will create similar issues. When and how the countries return to competition will have to be decided at some point in the future.

Regarding the growth of hockey in Asia, Tardif expressed his initial scepticism about the dedication of the Chinese authorities to growing the sport in the long term rather than just for the Olympics, but what he saw while he was in Beijing for the Games changed his mind.

“In the last two years, they’ve built 89 new rinks in China,” he said. “During the Winter Olympics, they made a huge promotion of winter sports, especially ice hockey.”

He further cited the country’s proposal to staging the IIHF Ice Hockey Women’s World Championship Division I Group A for three years with a financial contribution and level of infrastructure that wouldn’t be possible anywhere else in an 18,000-seat arena in Shenzhen, and the TV ratings for the women’s game between China and Japan, which was viewed by 89 million people in China.

“If only a few per cent of those people come to hockey that would be great,” said Tardif. “There is a good future for ice hockey in Asia. With the population, that’s where we have to put our focus if we really want to make this sport international.”

There was a question about the possibility of staging another World Championship in North America, where it was last held in 2008 in Quebec City and Halifax, Canada.

“I think there is a good relationship with Hockey Canada, USA Hockey, and the NHL, and my understanding is they don’t want any competition between the World Championship and the Stanley Cup playoffs,” said Tardif, noting that the IIHF hasn’t received a bid from North America since 2008. “They don’t do it because it doesn’t work, it was a success in 2008. But they want to be more involved in other competitions.”

Briza added the difficulties involving travelling European fans and the time zones for television viewers in Europe. “The TV figures are better in European time zones and so many fans are travelling. It is a very special atmosphere,” said Briza. Tardif noted Hockey Canada’s dedication to the World Junior Championship and the Women’s World Championship, and with discussions going on to do the same for the U18 World Championship.

Turning attention to next year’s World Championship, which will be co-hosted by Tampere, Finland and Riga, Latvia, the panel talked about the challenges in quickly finding a replacement host for St. Petersburg, Russia, and that the hosts of the two most recent tournaments makes the most sense because all of the infrastructure and people is in place. Tardif mentioned the desire to reward the Latvians for adapting to last year’s tournament by hosting alone and having to build a second venue when they were originally to co-host with Belarus, and for staging it with almost no revenue from paid spectators.

“Organizing a World Championship in 11 months (instead of four years) isn’t easy, but we did our homework and were encouraged to do it with the IIHF and we have so much ready. That’s why we decided to bid for 2023,” said Nummela.

There are still two more days left of this year’s event, but Hietanen, who will also be part of the Organizing Committee for next year said: “On Monday, we begin working on the 2023 World Championship in cooperation with our Latvian friends.”