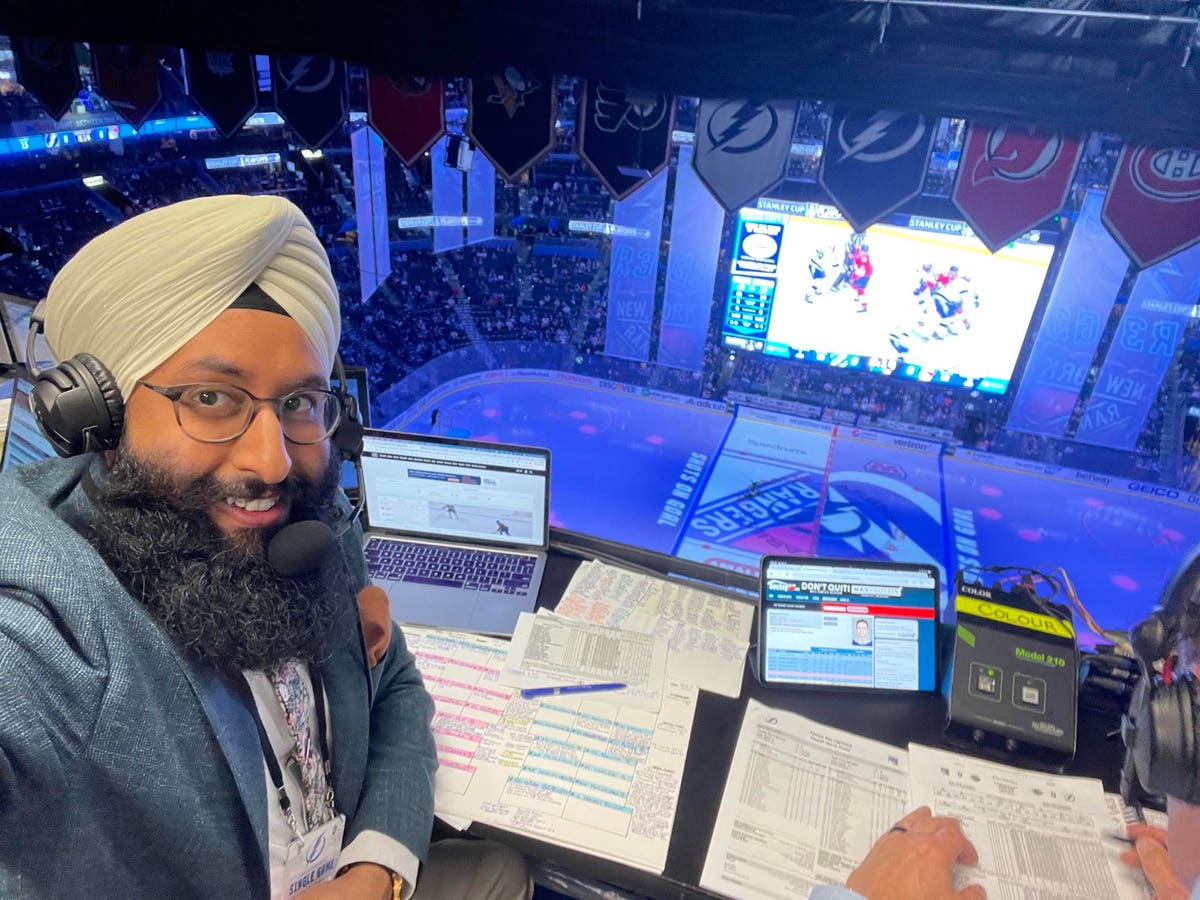 When asked about the most extraordinary moment he saw while calling play-by-play during the 2022 Stanley Cup Playoffs, Harnarayan Singh didn’t hesitate.

“Probably my favorite goal to call in the playoffs was Nathan MacKinnon’s, that unreal comeback against St. Louis and he went end-to-end,” Singh said.

With the Avalanche leading the Blues 3-1 in their second-round series and looking to clinch on home ice, MacKinnon’s hat-trick goal put Colorado up 4-3 with 2:46 remaining in regulation time. St. Louis was able to answer back and force Game 6, but MacKinnon’s blazing tally was a signature moment in the 2022 playoffs, on the path to his first Stanley Cup.

Part of the art of good play-by-play is finding the right words in the moment, enhancing what viewers are seeing on the screen.

“The way (MacKinnon) skates, I’ve heard people describe it as a gallop, right?” Singh said. “He has this unique acceleration and it stands out so much.

“So he starts out from his own end, and it kind of came out that ‘he’s on his horse.’”

In play-by-play, it’s also crucial to capture big moments as they’re unfolding. On the ice, they often come without warning.

“I was so relieved that I didn’t get caught telling some stat or something,” Singh chuckled. “I was on the play. It was such an exceptional end-to-end goal in such a high-stakes game.”

The 2022 playoffs were a pressure-cooker learning experience for Singh, 37, who is in just his second season of calling NHL play-by-play in English.

His backstory is well known, and is captured in his 2020 memoir, ‘One Game At A Time: My Journey From Small-Town Alberta To Hockey’s Biggest Stage.’ Growing up in rural southern Alberta as the son of Sikh immigrants from India, Singh fell in love with hockey at an early age and dreamed of becoming a broadcaster — even though nearly everyone on the ice and in the broadcast booth was white.

After graduating from broadcasting school and landing a job at the Canadian Broadcasting Corporation’s news service in Calgary, Singh was approached by a Hockey Night in Canada producer in 2008 with the idea of launching a Punjabi-language broadcast to help draw in new fans.

Since then, Hockey Night in Canada: Punjabi Edition has had its ups and downs, but remains on the air. As the lead play-by-play voice, Singh went viral when his crew covered the 2016 Stanley Cup Playoffs.

The Pittsburgh Penguins advanced to the Eastern Conference Final thanks to this overtime goal from Nick Bonino.

When Bonino potted the game winner late in Game 1 of the Stanley Cup Final against the San Jose Sharks, Singh took his call up another notch. And the English-speaking hockey world took notice.

Barely six months after that moment, Singh made history as the first Sikh to be part of an English-language broadcast on Sportsnet. He served as the in-arena host for a game between the Toronto Maple Leafs and the Calgary Flames in the Saddledome on Dec. 1, 2016.

Those hosting duties continued up to the summer of 2020. He worked the NHL’s 2020 Stanley Cup Playoffs as part of a skeleton broadcast crew in the Edmonton bubble, alongside veteran play-by-play man Chris Cuthbert and analyst Louie DeBrusk.

“I got a very rare seat,” Singh said. “I mean, there were no fans in the building at that time. Literally, in the stands, it’s just the three of us.”

Cuthbert, 64, has called NHL games since the mid-80s. He immediately recognized a kindred spirit.

“Even though I was in the host role during that time in the bubble, (Cuthbert) knew right away that someday I want to be doing play-by-play in English,” Singh said. “He was so nurturing of that. I really got to be a sponge and watch how he prepared and watch what he did.”

Cuthbert shared some trade secrets, too.

“During that time he, on his own, offered me his setup for how he called games in terms of his notes, his grid and and all of that,” said Singh. “Little did I know, at that time, that an opportunity would be coming up, just a few months away.”

When the NHL resumed play in January 2021, the league’s divisions had been realigned geographically, with all seven Canadian clubs relegated to the North Division. With Cuthbert returning to his usual home base in Toronto, an additional play-by-play voice was needed for national broadcasts in Western Canada.

Singh made his English-language play-by-play debut on January 13, calling the Edmonton Oilers’ season-opener against the Vancouver Canucks. His first season ran through the Winnipeg Jets’ four-game sweep of the Oilers during the 2021 Stanley Cup Playoffs.

He returned to the national broadcast team for the 2021-22 season, then received three postseason-series assignments: Edmonton’s first-round win over the Los Angeles Kings, Colorado’s second-round triumph over the St. Louis Blues, and the seven-game thriller between the New York Rangers and the Tampa Bay Lightning.

Six weeks of regular reps made him feel more confident than ever in his English-language calls.

“I think I was able to get into a rhythm,” he said. “It just becomes second nature.”

The path to that state of ease has been long and gruelling.

“I put my pressure on myself, personally, to perform, and for all the sacrifice my family has had to make for me to be able to continue on this path,” he said. “It’s taken a lot of time, blood, sweat and tears.

“And then I put the pressure of my community on myself, too. Because when you’re one of the first from your community to do something, you want to make sure you do a good enough job to keep that door open to try to pave the way for other people to be able to dream.

“If you’ve been told before by some executives that ‘We’re not sure if audiences would be ready’ for someone like myself, then I want to make sure that ‘Okay, let’s do a great enough job that that’s no longer the case, that’s no longer a barrier.’

“There’s technical stuff too,” he added. “It was 700-plus games of calling hockey in Punjabi, and then it’s a different language. Even though I speak conversational English totally fine, it’s a little bit of a battle in the brain.”

While Singh feels the responsibility of serving as a role model, he embraces the opportunities that his position provides.

While he was calling the second-round series between St. Louis and Colorado, the wife of Avalanche forward Nazem Kadri shared some of the racist messages that the family had received on social media after a Game 3 collision between Kadri and Jordan Binnington injured the Blues’ goalkeeper and knocked him out of the series.

Kadri’s family is of Lebanese descent. He became the first Muslim ever to lift the Stanley Cup when the Avalanche defeated the Lightning in game 6 of the Stanley Cup Final.

“I received a number of media requests to talk about (the collision), and I was asked, ‘Are you comfortable and wanting to do this?’” Singh said.

“My answer, even internally, was that there’s only a very select few moments when the sports world is paying attention to these types of topics, like racism and discrimination and hate. I said, ‘It’s important for me to speak up. Because the sports world — they’re watching and listening to this now.’

“The more we speak up and talk about how this is actually more common than you think, raising awareness about it — that’s part of the recipe to try to fix these issues. So my response was, ‘I’m actually more willing to talk about this.’ These are the media requests I definitely want to say yes to. Because it’s important to me, and I’ve been on the receiving end of those messages.

“I want to do a good enough job to change that narrative. I want to be able to prove that this game should be welcoming for everybody who wants to participate, no matter who they are, how they look.

“And these conversations, I feel, are important, right? Because if it’s another player who collided with (Binnington), who’s in the majority, this conversation isn’t even happening.

“The fact that (Kadri) gets those messages after that situation, that it happens — it’s important for us to address it, acknowledge it and raise awareness. So that people realize, ‘Okay, we still have a long ways to go.’”