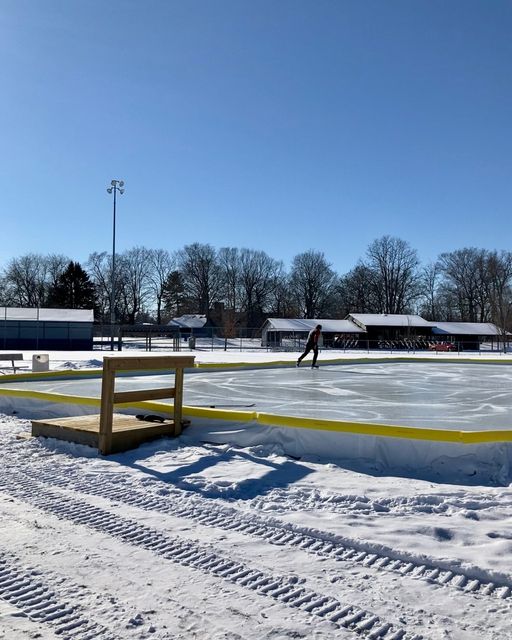 City staff recommended approval of the use of the ice rink this winter, and commissioners approved the use of no more than $7, 000, which City Manager Aaron Desentz said was likely a high figure.

Commissioners approved the purchase of a rink, installation, labor, water, supplies and other costs last year, but it wasn’t in use until Jan. 7, making a short season, Director of Parks and Public Spaces Phil Biscorner said in a memo to Desentz and William R. Mrdeza, director of community services and economic development.

Last winter, Biscorner said, the rink has been closed five days and partially closed four because of ice conditions deteriorating.

City staff stopped nightly maintenance on the rink Feb. 19 but tried to keep it open for 10 more days but temperatures increased that week, Biscorner said in the memo.

Last winter, the rink was open or partially open for 47 days.

City staff sent a survey to residents regarding the rink, and received 80 responses.

Of the respondents, 34 did not use the rink; 26 used the rink one to three times; 11 used it 4 to 6 occasions; four used it 7 to 9 times and five used the rink more than ten times.

While discussing the rink, Commissioner Mary Alsager questioned whether the city could obtain used skates from Central Michigan University, which in the past rented ice skates.

However , Biscorner said the city looked into partnering with CMU but it isn’t feasible due to staffing issues.

Commissioner Liz Busch suggested the possibility of Mt. Pleasant Parks and Recreation hosting a winter sports equipment swap day, whilst Commissioner Maureen Eke pondered whether the city could do more to publicize the rink’s existence.

Alsager suggested a sign at the entrance to Island Park to let residents know about the rink.

Opening of the rink is dependent on weather, and it will be open from 8 a. m. to 9 p. meters. daily, depending on ice conditions.