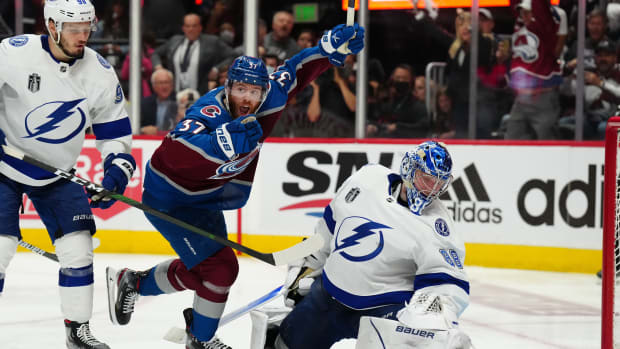 DENVER – As Nazem Kadri slammed into the boards thanks to a blind-side hit from Edmonton Oilers forward Evander Kane in Game 3 of the Western Conference Final, the shockwave of his absence hit the Colorado Avalanche like a neutron bomb.

Or, at least, it should have.

Sure, the Avalanche were in the midst of dismantling an overmatched Oilers squad when Kadri went down. They likely would have beaten them anyway. But regardless of the matchup, losing a top-six center who scored at a 110-point pace in the regular season at a crucial moment in a do-or-die Cup run would be a sucker punch from which very few teams can recover nonetheless.

The Avalanche, however, are not your average team. When one body goes down, which has happened alarmingly often this postseason, another one rarely fails to step up — usually without missing a beat.

J.T. Compher was next in line for the Avalanche after Kadri was ruled out for the remainder of that series. And not only has the 27-year-old kept his star teammate’s rhythm in his absence, but he’s also added a versatile instrument to the Avs’ renowned ensemble that is currently three wins away from championship glory.

It wouldn’t be a stretch to say that few people outside the Avalanche locker room saw Compher’s emergence coming, either. But for those that did, this evolution began long before his ascendance up the lineup.

“I think somewhere along the line in the St. Louis series, he really started to elevate his game production-wise,” explained Avalanche coach Jared Bednar on the morning of Game 2.

“But he was also more tenacious on the pucks, getting to the net-front, helping there”

Compher has spent the bulk of his career being the type of effective depth forward with which coaches long to fill their bottom six. His regular-season production is startlingly consistent, with Compher posting point totals of 32, 31, 18 (in 48 games amid a pandemic-shortened schedule), and 33 in his past four seasons, respectively.

This is a player you can set your watch to. And the Avalanche have done just that for the past half-decade, deploying Compher as a versatile complementary piece whose prowess on both sides of the puck helps tilt the depth battle in their favor night after night.

He’s rarely been asked to do anything more — largely because the Avalanche haven’t needed him to.

But all of that changed two weeks ago in Edmonton. And Compher has risen to the challenge, and then some.

“With the loss of Kadri, he (Compher) gets elevated in the Edmonton series and does a real nice job for us,” continued Bednar.

“He continues to be a responsible defensive guy while filling in in some heavy situations on the defending side, while still being able to compliment guys like Mikko (Rantanen), and Lehky (Artturi Lehkonen), and Burky (Andre Burakovsky).

“And last game was a perfect example of that, for him to create trouble on both sides of the puck”

Bednar was certainly on the money about Compher’s Game 1.

Playing in his first-ever Stanley Cup Final and filling in on the second line against the back-to-back champions, Compher propelled the Avalanche to a whopping 62.61 percent share of the expected goals and 57.89 percent share of the available scoring chances at even-strength, during which he logged a playoff-high 13:57 against steep competition that ended up being among the heaviest workloads of any Avs forward.

Compher also chipped in an assist for good measure — at five-on-five, of course, from which all but one of his points have come this postseason — despite the bulk of his minutes coming against the vaunted defensive duo of Victor Hedman and Mikhail Sergachev. When facing each other, Compher held Hedman to a negative CF/60 percentage at even-strength all night long, with both Hedman and Sergachev’s possession numbers skyrocketing whenever Compher happened to not be on the ice.

It’s difficult to imagine Compher doing a better job with the cards he’s been dealt, really.

The Avalanche dominated the Lightning in nearly all facets of play throughout Wednesday’s series-opening game, and Compher played a primary role in that victory. Despite losing a first-line caliber center who, at the time of injury, was in the midst of a perhaps a career-best stretch, the Avalanche have proceeded to experience almost no drop-off in overall performance thanks, in part, to Compher’s deft ability to assume any and every role he’s been given.

Once again, the question must be asked: How many other teams could do the same?