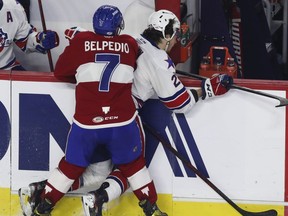 The Laval Rocket was back on the ice at Place Bell Monday to begin a week of preparations for their best-of-seven Calder Cup Eastern Conference final against the Springfield Thunderbirds.

Head coach Jean-François Houle ran his charges through a 45-minute practice that was designed to get the players’ hearts pumping after a four-day break following their sweep of the Rochester Americans in the best-of-five North Division final, which concluded with a 6-5 Game 3 win in triple overtime.

“It was a pretty intense practice, lots of skating,” said defenceman Louie Belpedio. “It was nice to have a few days to rest and relax and now we reset and have a week of practice to get ready for Springfield.

“It’s a team that we don’t know much about, but we have a fairly similar formation,” said Houle. “It’s different from our last series when Rochester had a lot of young guys. Springfield has talented players who have a lot of experience, much like us. I know it’s going to be a great series. On paper, it’s a team that has a lot of firepower.”

The Rocket and the Thunderbirds met twice during the regular season with each team posting a win on the road. The Thunderbirds have dominated the playoffs, sweeping their first two series against Wilkes-Barre and Charlotte, respectively, and outscoring them 32-13.

Houle pointed to veteran Thunderbirds such as James Neal, a 34-year-old who has 296 goals in 869 NHL games, and undersized centre Sam Anas, who has been a scoring machine in the AHL.

Houle said the team will practise in Laval Tuesday and Wednesday before travelling to Springfield on Thursday. There will be a final practice Friday before the series begins with games Saturday and Sunday. While there will be some elements of the game plan tailored to facing the Thunderbirds, Houle and his players have emphasized the importance of playing their game.

“They’re similar to us and they can play both ways, fast and skilled or hard and gritty,” said Belpedio. “I think that’s what makes playoff teams successful, being able to balance things. We want to be able to play our game and not worry about what they’re doing.”

The Thunderbirds have several players with connections to the Canadiens organization.

Centre Matthew Peca played more than half of his 83 NHL games with the Canadiens and winger Will Bitten, who has nine points in six playoff games, was a third-round draft choice (No. 70 overall) of the Canadiens in 2016.

And then there’s goaltender Charlie Lindgren, who spent four seasons with the Rocket with occasional call-ups to the Canadiens. He’s undefeated in two playoff games and was 5-0 when he was called up to the St. Louis Blues this season. Lindgren played only three games with the Rocket last season because he was on the Canadiens’ taxi squad. He has been sharing the net with Joel Hofer, who is being groomed as the Blues’ goaltender of the future.

While Springfield finished second in the Atlantic Division with a .625 winning percentage and Laval had a .590 winning percentage to place third in the North Division, forward Danick Martel said he expected a tough series, but was confident of his team’s chances.

“There’s no way we’re the underdogs in this series,” said Martel. “It’s going to be a tough series, but I’m sure they’re saying the same thing in their locker room.”

Sign up to receive daily headline news from the Montreal Gazette, a division of Postmedia Network Inc.

The next issue of Montreal Gazette Headline News will soon be in your inbox.