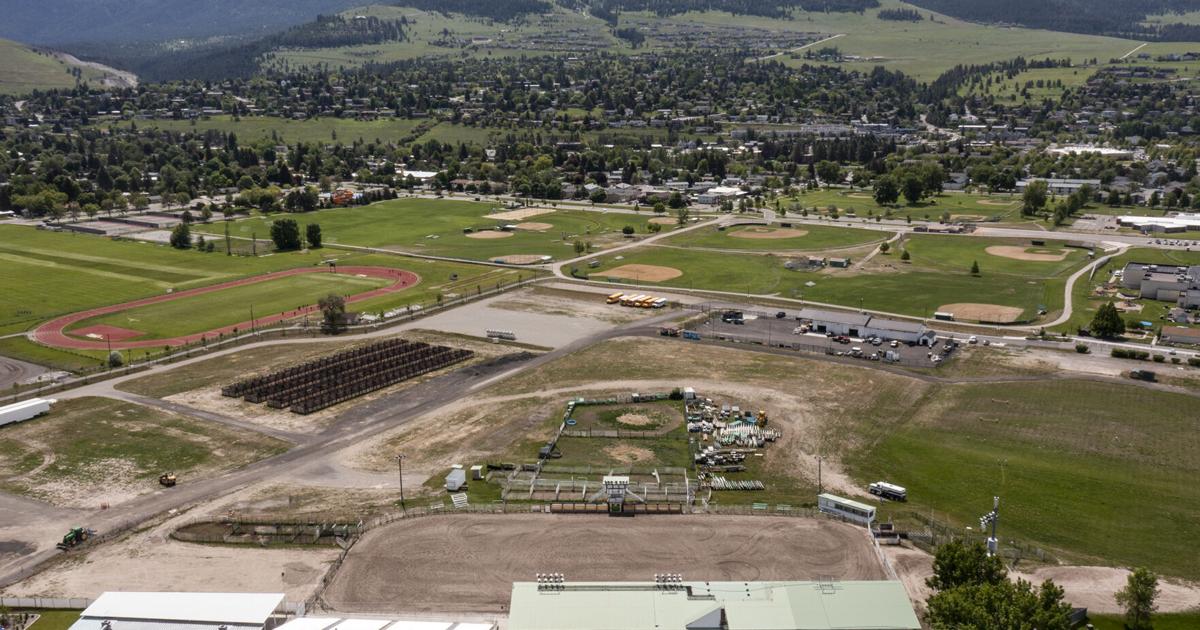 Anyone who’s tried to play hockey in Missoula, youth or adult, knows it’s a constant battle to find ice time. Many league games start at 11:30 or later on weeknights because there’s only one ice sheet in the summer and two in the winter, with tens of thousands of people jockeying for the same small space at Glacier Ice Rink.

Popular agricultural activities in the Missoula area face the same dilemma, with not enough year-round, indoor space for 4-H events, livestock care, rodeo and equestrian activities. The two worlds often collide, because every summer the only ice rink in town has to be shut down in August during the Western Montana Fair so that the space can be used as, essentially, a livestock barn.

The conversion process takes several weeks, with three semi loads of wood chips getting hauled in, and all the skaters are out of luck for the month.

A rendering of the proposed ag and livestock center that could be built at the fairgrounds.

That’s why Missoula County Fairgrounds officials, fairgrounds user groups and other partners hope that county taxpayers will support a $19 million general obligation bond. The money would pay for a completely new year-round ice rink building with a third NHL-sized sheet along with a new 80,000-square foot livestock and ag arena. It would also pay for improved 4-H and Future Farmers of America learning and exhibit arenas and additional green space.

According to Billie Ayers, the events and operations manager for the fairgrounds, they’re trying to build on the success it had with Phase 1 of the redevelopment of the massive public asset in central Missoula, including a new historic plaza and upgraded buildings. Now, they’re ready to move on with Phase 2.

“We’re trying to meet the needs of the community,” Ayers said.

From April 2021 to 2022, the fairgrounds saw 459,000 visits, with each visitor returning an average of 3.94 times. Glacier Ice Rink now sees more than 110,000 visits by ice users every year, with over 600 kids participating in youth hockey programs and 300 people in figure skating and beginner lessons. There’s another 400 kids in 4-H and FFA that enroll in 148 different agricultural education programs.

“The fairgrounds provide important opportunities for youth agricultural education and recreation,” Ayers said. “However, the facilities are at max capacity and cannot meet growing demand.”

Laura Henning, the executive director at Glacier Ice Rink, said she has to disappoint kids and adults every year with touch choices because of a lack of space. For example, she may have to turn down an offer from an NHL team to host a youth hockey camp in August because that’s when the ice rink has to get converted into a livestock center. But kids are impacted year round by the lack of ice time.

“We had, I want to say, 300 kids in the learn to skate or learn to play hockey program,” she said. “And so we get all these kids who start and then we’re like, ‘Well, what are we gonna do with them?’ We can’t put them anywhere.”

The Griz hockey program at the ice rink has been a huge success, she said, and hockey tournaments are a big boon to local hotels and businesses. The new Missoula Butterfly House and Insectarium is scheduled to be open at the fairgrounds next year (along with the Missoula County Extension offices and community garden — the $16 million project will be called the Rocky Mountain Gardens and Explorations Center). That means another 70,000 people are expected to visit the fairgrounds every year. But the current ice rink is often packed beyond capacity.

“This building is not built to accommodate crowds,” Henning explained. “So I think the new facility layout would be much improved and just make it easier for everybody.”

Barrett Campbell, the 4-H and youth development agent at the Missoula County Extension Office, said it’s exhausting and problematic to convert an ice rink into a livestock and ag center every year for the fair. The animals don’t get enough air circulation, the slippery concrete has to be covered, and an untold sum of sawdust and woodchips has to be hauled in and cleaned out in the heat of the summer.

“The fair is sort of the culmination of these kids’ year of education and raising these animals, but there’s a lot that goes into getting them to the fair,” he said. “A lot of that stuff could be enhanced by having a facility that’s for ag livestock versus for rodeo. They could do year-round shows. There’s things called jackpot shows, which are sort of like practice shows but another chance to compete and win fabulous prizes and buckles.”

A new facility would be a better experience for the participants, the animals, the staff and the public, he explained.

Fairgrounds staff along with user groups and community organizations have already come up with new designs for the buildings and have mapped out where they would go. A $19 million general obligation bond would be split about evenly to pay for the ag and livestock center and the new ice rink. A new rodeo arena and new grandstands are being paid for by a private fundraising effort called the Heritage Campaign, but the two projects are being designed to happen concurrently.

Campbell said that it’s up to user groups to ask the Missoula County commissioners to put the question of a general obligation bond for the fairgrounds on the November 2022 ballot. If that happens, he said, construction could start next year.

It’s not clear whether there is bond fatigue in Missoula County, because many general obligation bonds and levies have been passed by voters in the past decade. This past Tuesday, voters approved a 4-mill levy for Missoula Aging Services.

According to a Missoula County website, the total amount of all general obligation bonds on the books as of 2019 in the county add roughly $11 each month combined to the property tax bill of a home valued at $250,000. That amount has increased a little bit since 2019, because the Aging Services levy will add around 75 cents per month to that same home. The assessed value of a home is determined by the state and is much different from the price a home would fetch on the open market.

It’s not clear how much exactly a $19 million bond would add to a property tax bill, but the $30 million Missoula Public Library bond passed in 2016 adds about $2 a month to the bill of a home with an assessed value of $250,000.

A new ice rink could increase participation in curling, figure skating and hockey programs by as much as 50%. It would also add 65 more hours of public skating time every week and provide space for 4-6 more teams.

Ayers said the 4-H/FFA communities and the ice community planned on asking voters to approve a bond in 2020, but COVID derailed those plans. Now, they’ve scaled back the designs because of increased construction costs.

A rendering of what the layout of the fairgrounds would look like with the expansion.

“Stakeholders are developing a request to county commissioners to ask Missoula County voters to consider making a public investment in these improvements,” Ayers said. “Which will create more opportunities for agricultural education programs like 4-H and FFA with a new indoor ag and livestock arena and expanded recreation with a third sheet of ice for skating, hockey and curling.”