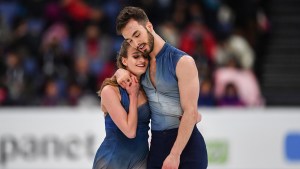 Meet Donovan Carrillo, whose determination and sacrifice can inspire us all.

When Donovan Carrillo entered the ice rink at this year’s Winter Olympics, he was the first Mexican to do so in 30 years. And although he came in 22nd in the free skate, and ranked 22nd overall, his journey is so inspirational that he can only be viewed as a true champion.

When Carillo was selected for the Olympics, he described it as a “dream come true,” according to an article in the New York Times. It came after years of dedication to a sport that is seriously under-funded in his hometown of Guadalajara in Mexico and, in fact, throughout the whole country.

The 22-year-old started his athletic career with gymnastics and diving. However, he switched to ice skating thanks to his big sister, Daphne. When he’d go with his parents to pick her up, or drop her off, he noticed a young girl named Lisa, with whom he fell in love.

So with his parents’ support he started ice skating — and thankfully his sporting past lent itself nicely to the sport. (If you look at the video below you can see the clever way that ice skaters practice their spins!)

The only hiccup was the cost, and the lack of facilities. As Donovan’s father jokingly explains in the video, Mexicans normally associate ice with something you put in a drink and not with the sport. So his son is actually one of the very few young men ice skating in their home country.

In fact, in 2013, while Donovan was barely a teen, his usual ice rink closed and he had nowhere to practice. In the end he had to move to Leon, in Guanajuato, and live with his coach, Gregorio Nuñez, so he could still practice.

The move was hard on the whole family, both emotionally and financially, and what was meant to be just a few months away from home turned out to be nine years — nearly half of Donovan’s life.

The ice skating hero’s story is not about medals; it’s about determination, effort, and sacrifice. As Donovan’s dad shares: “There’s no money, but we have happy children.”

And looking at the Olympian’s face, it is clear that he’s more than happy; he’s excited for life. He wants to show what anyone can achieved, even if you don’t have state-of-the-art equipment, and a pandemic plays havoc with your training.

Looking at him glide along the ice rink with ease, in costumes that pay homage to his home country, it’s hard to imagine that he trained on a small ice rink with sub-standard ice, and used a run-down skate-park to envisage performing in front of the judges.

Carillo is a young man who will jump over any obstacle — probably with a perfect Salchow — to achieve his dream and honor his family. And that is a true champion!