Mike Smith not only good in playoffs, he’s been kind of epic – Edmonton Journal 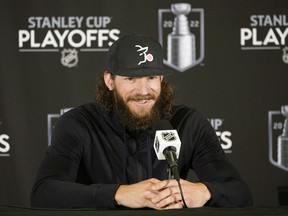 Mike Smith has not only been good in these 2022, he’s been kind of epic.

He’s on the sort of winning roll that hardly a single Edmonton Oilers fan or pundit expected of him as of early April. At that time the Cult of Hockey did a fan poll on the Oilers goalies situation, with an overwhelming 94 per cent of respondents voting to bench Smith in favour of Mikko Koskinen and Stuart Skinner. But Smith got healthy, then got on a roll in April, a streak of impressive play that has now lasted two months. The streak culminated with Smith outplaying first Jonathan Quick in the Los Angeles series, then Jacob Markstrom in the Battle of Alberta.

We apologize, but this video has failed to load.

Even before this run Smith was something of a cult hero in Edmonton, both for his strong play in the 2020-21 season, when he bounced back from two unimpressive seasons with .898 and .902 goal percentages, and for a rousing fight at centre ice with Flames goalie Cam Talbot on February 1, 2020, shortly before COVID hit.

That year Smith had one of the best seasons a goalie his age has ever had, posting a .923 save percentage in 32 games. And now he’s doing it again, going where few other NHL goalies in their 40th year have ever gone. In fact only one other 40-year-old goalie, Jacques Plante in 1969, ever posted a better save percentage than Smith’ s .927 this year. Plante was at .950 in 10 games for the St. Louis Blues.

It’s been an epic performance from Smith, with something of an Old Testament flavour, Smith coming across as a wild-eyed and long-haired prophet, bringing down doom on the opposition and leading his own tribe to the Promised Land. At any moment we can expect his stick to turn into a snake and for frogs to rain down from the rafters of Colorado’s home arena.

If the Bull of Heaven should ever reappear to threaten our city, I nominate Smith as our champion.

Of course, with his monumental saves and hideous mistakes, he’s got that Denis Grebeshkov quality to him — 95 per cent great player, five per cent secret agent for the opposing team. But overall he’s been a great bargain for the Oilers, just like we all were so fully confident he was going to be and never for a second doubted, right?

Can Smith keep it going strong? If he stays healthy he can, and he’s got one more bit of motivation for this coming round against the Avs of Colorado, as if proving the near entirety of Oiler fandom stupid and wrong wasn’t enough. Oilers

GM Ken Holland was keen in the pursuit of goalie Darcy Kuemper last summer. He would have brought in Kuemper over Smith.

And it’s the same Kuemper now guarding the Avs’ net.

Good luck to him.

For weeks now, Smith has let loose with his old school, old-fashioned fire and brimstone whoop-ass.

He’s called to a mission. If he hasn’t turned every single Oilers fan into a believer, he may do so yet.

McCURDY: How the beast of the Avs was built

STAPLES: Right side fever pushing the Oilers deep into playoffs

Sign up to receive daily headline news from the Edmonton Journal, a division of Postmedia Network Inc.

The next issue of Edmonton Journal Headline News will soon be in your inbox.