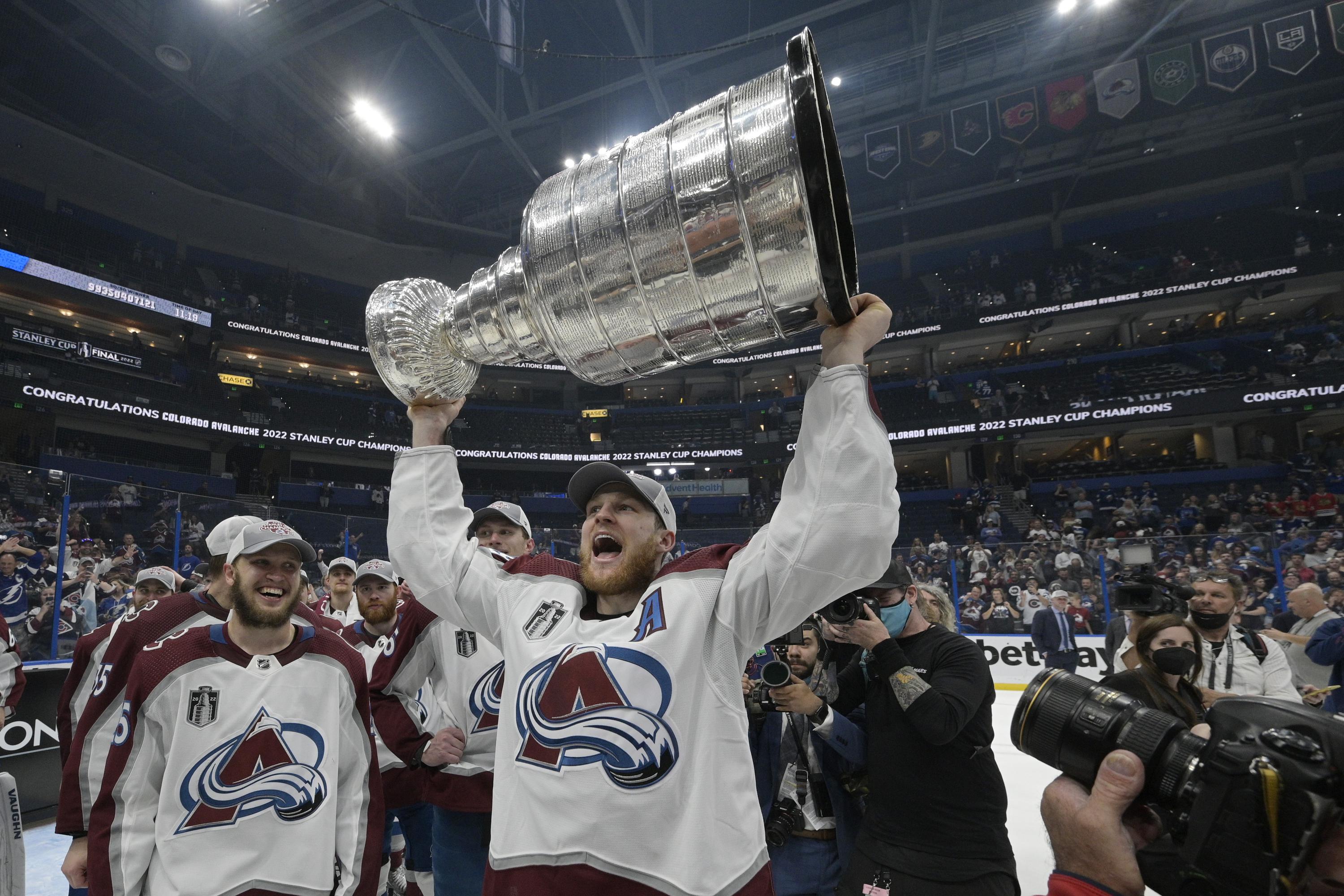 DENVER (AP) — How’s this for a hat trick: The Mile High City is now home to the Stanley Cup, NCAA and national high school hockey champions.

There must be something in the (frozen) water around Denver, right?

“More the elevation than the water,” cracked University of Denver coach David Carle, whose program won its ninth national title in April.

Detroit may be known as “Hockeytown,” but Denver (elevation: 5,280 feet) has currently taken over at center ice. The Colorado Avalanche became the latest team from the city to join the party with a 2-1 win over Tampa Bay on Sunday in Game 6 to end the Lightning’s two-year reign. It secured Colorado’s third Stanley Cup title since moving to town from Quebec before the 1995-96 season.

These days, there have been plenty of celebrations for area hockey squads. Denver East High School got the puck rolling by capturing a national title three months ago in Texas, and the Pioneers followed suit by beating Minnesota State in Boston for the NCAA crown.

Now, Cale Makar, Nathan MacKinnon and the rest of the Avalanche will take a victory skate, this time with a parade through the streets of Denver on Thursday.

“We’re in another Renaissance,” Denver East coach John Kopperud said of the trickle-down effect from the success of the Avalanche. “You’re getting the best athletes at a young age wanting to play hockey — and it’s a beautiful thing to see.”

The Pioneers and Avalanche teamed up for a rare accomplishment: A champion NCAA Division I hockey squad and a Stanley Cup-winning NHL team hailing from the same city in the same season. Boston had been the last to do so — 50 years ago, in 1972 (Boston University and the Bruins). In 1998, teams from the same state (University of Michigan and Detroit Red Wings) captured titles.

“No doubt it’s an historic feat,” said Carle, the 32-year-old coach for the Pioneers who who retired from playing after being diagnosed with hypertrophic cardiomyopathy. He was picked by Tampa Bay in the seventh round of the 2008 draft. “It’s a really exciting time.”

If history is any indication, this run by the Avalanche will only further increase the interest among young players throughout the region.

There were 16,513 registered players through USA Hockey in the Rocky Mountain region in 1994-95, the year before the Avalanche moved to Denver. Colorado hoisted its first Cup in ’96 and the following year the total increased to 20,286 players, according to USA Hockey figures.

After the Avalanche won Cup No. 2 in 2001, there were 34,393 registered players — more than doubling in six years — around the region, which counts Arizona, Colorado, New Mexico, Oklahoma, Idaho, Texas and Utah.

This past season, a record 3,077 players 8 and under were playing hockey in Colorado, with girls the fastest growing segment, doubling over the last five years to nearly 600 players.

This could be just the tip of the iceberg, too. Over the Lightning’s three-year run to the Stanley Cup Final, Tampa saw youth hockey grow overall by 32%.

Translation: The next No. 8 (Makar) or No. 29 (MacKinnon) could be just taking the ice.

“So now you have all these star players in Denver and it’s just going to really push things over the top,” said Kevin Erlenbach, the assistant executive director of membership for USA Hockey.

The cold, hard truth — more rinks are needed to accommodate even more growth. There are 14 facilities in metro Denver, featuring 25 sheets of ice. Throughout the state, there are 33 facilities and 49 sheets.

“Municipalities and even private investors aren’t going to build rinks unless they know there’s a demand and a growing population, too,” Erlenbach explained. “We’ve got a little bit of both. I would imagine that there’s a lot of people out there that will move forward on some new sheets of ice.”

The Avalanche have been steadily building toward this title since 2016-17, when coach Jared Bednar took over and they turned in a dismal 48-point season. They quickly turned things around and won the Presidents’ Trophy (best record) last year, only to be eliminated in the second round. That made them even more hungry this time around. They went 16-4 along the way to the Cup, including sweeps of Nashville and Edmonton, before dethroning the Lightning.

“People don’t realize what an amazing sports town Denver is,” Avalanche captain Gabriel Landeskog said. “We got support from everywhere.”

“Both groups have a special bond, a camaraderie that is tough to come by, and I think it comes down to good people willing to sacrifice for one another,” O’Connor said after clinching the Cup. “Both organizations and programs deserve it.”

Just once has Carle watched a replay of his team’s comeback win for the NCAA title His focus has turned toward next season as the Pioneeers attempt to win back-to-back titles like the team accomplished in 2004 and ’05. Carle did recently go out to dinner with his staff — and they brought the trophy.

“You get (celebrations) in at different moments, and we’re always going to enjoy it,” Carle said.

Same with Denver East, which knocked off the Northport (New York) Huntington Tigers 4-2 for the Division II crown at the Chipotle-USA Hockey high school championships in Plano, Texas. The title has received even more buzz since the Pioneers and the Avalanche followed Denver East’s lead.

“It’s cool for Denver to have all three teams win it all,” said Kopperud, who’s also a real estate agent. “This is something they’re going to be talking about for the rest of their lives.”