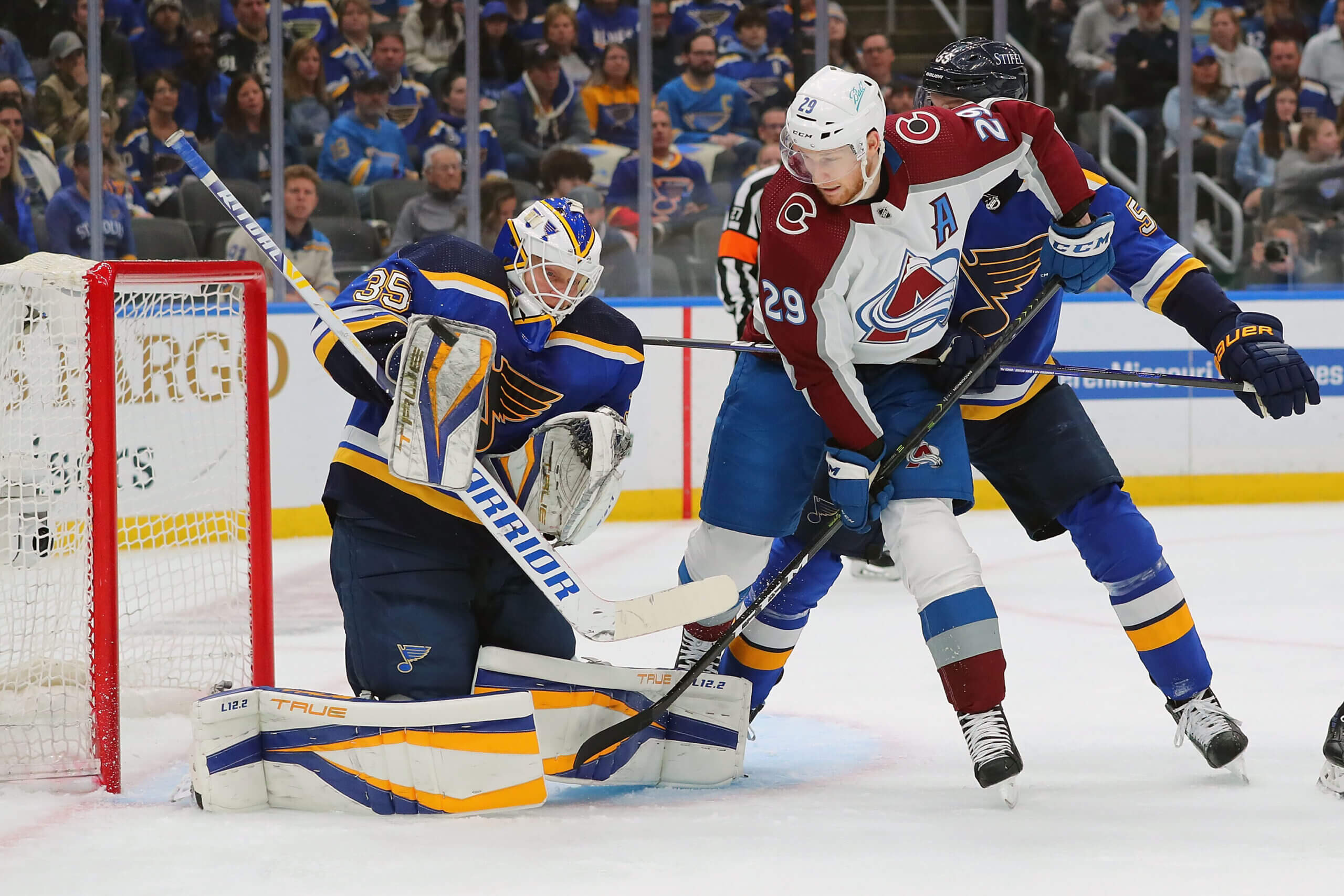 Nathan MacKinnon had only known the losing end of the second round.

Last year, he fired a slapper on Vegas’ net as the clock expired in Game 6, as if shooting hard enough could account for the three goals needed to tie the game. The postseason before, he stared blankly from the bench as Dallas’ players celebrated their Game 7 overtime win. And in 2019, he walked through the handshake line, stopping to congratulate goalie Martin Jones on handing Colorado a one-goal loss in Game 7.

The Avalanche star didn’t want any of that to happen again, especially knowing the talent on Colorado’s roster. So he did all he could to ensure an Avalanche victory in Game 5, completing a hat trick with an all-time, coast-to-coast goal Wednesday. But it wasn’t enough, as St. Louis scored a score-tying goal in the final minute and won in overtime.

“Hopefully everything happens for a reason,” he said after that game. “We’ve got to go get this done.”

This is a man who hates losing. As far back as when he was at Shattuck-St. Mary’s, a prep high school in Minnesota, he and friend Danny Tirone wouldn’t talk to each other for hours after contentious pingpong battles, Tirone told The Athletic. The two also held a knee hockey tournament in their dorm, using their artistic skills to build a trophy, but when their team lost, they had to leave the room to cool down. Late in one 2019 Avalanche defeat, MacKinnon lost his composure on the bench, spiking his green Gatorade water bottle and snapping at coach Jared Bednar.

Now 26, MacKinnon has emerged as a more mature version of himself. His competitive fire is still ever-present, but over the past few years, he’s poured resources into nutrition, fitness and a sports psychologist. So though he was disappointed, naturally, after Game 5, he spoke with more measured tones than in years past. He kept his focus squarely on the future, on what he still believed he and his teammates could accomplish.

And the Avalanche lived up to those words, coming back in the third period Friday to win 3-2 against the Blues and sending MacKinnon to his first Western Conference final. And though the star player didn’t dominate the stat sheet, his underlying numbers were excellent. The Avalanche had 81.65 percent of the five-on-five expected goal share with him on the ice in a Game 6 victory, per Natural Stat Trick, and had 11 scoring chances while allowing only three. “That’s Playoff Nate,” Cale Makar said of MacKinnon’s Game 5 performance, but his words applied to his teammate in Game 6, too. “We don’t expect anything less.”

MacKinnon went almost exclusively against Ryan O’Reilly in the second round. The Blues captain and former Avalanche player is one of the top defensive forwards in the league, and he won the Conn Smythe and Selke trophies in 2019. And though MacKinnon’s point production was lower against St. Louis than previous rounds, he still finished with seven points in the six-game series.

O’Reilly and MacKinnon played more than 80 minutes against each other at five-on-five in the series. The Blues had an edge in goals (4-3) during those minutes, but Colorado dominated possession and shots, helping wear down the Blues’ goaltending and defense. The Avalanche had 66.86 percent of the five-on-five expected goals share when MacKinnon and O’Reilly shared the ice, out-chanced the Blues 43-22 and out-high-danger-chanced them 19-11. MacKinnon said going into the series that “the best defense is a good offense, patient offense,” and that’s what he provided.

MacKinnon, the third-longest-tenured Avalanche player, lived up to his billing as the face of the franchise, showing he can dominate when the moment is most intense. He’s a No. 1 pick who has blossomed into an NHL superstar, and now he’ll get to play on a bigger stage than he reached in his first eight years.

“It means a lot,” he said after the Avalanche’s win against the Blues on Friday. “There have been some dark times. Nice to get over this hump, for sure.”

Dark times indeed. After a trip to the playoffs in 2013-14, his rookie year, MacKinnon didn’t make it back to the postseason until 2017-18. The three seasons in between featured a dismal 2016-17 in which Colorado finished with a league-worst 48 points. The next closest team, Vancouver, had 69.

But the Avalanche progressed under Bednar, ultimately becoming a Stanley Cup threat. They just couldn’t get over that pesky second-round hump. Pressure reached a high point this year. Earlier in the season, during an ESPN broadcast, between-the-benches reporter Emily Kaplan said a Vegas player yelled at the Colorado bench, “get out of the second round, why don’t you?” Then general manager Joe Sakic went all-in at the trade deadline, adding the likes of Artturi Lehkonen and Josh Manson.

“I know how much our players want (to win),” Bednar said. “I’ve been with a lot of these guys now for six years and some of them were here before me, and I’ve had discussions with them. Even the new guys that we’ve brought in, trying to win, it’s hard. It’s really hard.”

Because of the degree of difficulty in the playoffs, MacKinnon stressed enjoying the journey. He sure did late in the deciding Game 6 against St. Louis. He was the first player to raise his arms after Darren Helm shot in the winner, quickly joining in a mass of celebrating teammates. And when the final horn blew, he skated straight toward Darcy Kuemper, leaping into his arms in front of the Avalanche net.

This is an awesome photo of Nathan MacKinnon and Darcy Kuemper, shot by @DilipVishwanat for Getty pic.twitter.com/xWd88oM09D

“There will only be four teams soon, and obviously the job’s not finished, but that’s a great accomplishment for us,” he said. “I thought we outplayed them for the majority of the series and definitely tonight. We deserved a good bounce there at the end.”

Perhaps it would’ve been sexier if MacKinnon’s highlight-reel goal in Game 5 proved to be the series-winner. But MacKinnon is happiest when he wins, regardless of how victory comes about. And that’s what the Avalanche did.

• Helm has referred to former Red Wings forward Darren McCarty as one of the players he emulated early in his career, and McCarty said postgame that he “got chills, personally, because D. Helm is one of my kids.”

“At the end of the day, your stars have to be your stars, but your role players, they have to do their job and at the moments needed (they can) do something special,” McCarty said in a text message to The Athletic. “Couldn’t be happier for the player and couldn’t happen to a better human.”

• Goalie Darcy Kuemper had a tough series against the Blues, but he found his game a bit in Game 6 after allowing a goal he should’ve had to Justin Faulk. He wasn’t perfect — Josh Manson saved him with a key block on Jordan Kyrou during a power play — but Kyrou couldn’t get a breakaway past him at one point and he didn’t allow a goal in the third period. He finished the series with an .892 save percentage and will need to play better if Colorado is going to become a championship team, but Game 6 marked a performance off of which he can build.

Facing more shots against a strong Edmonton offense could help him find a rhythm, too. He spent a lot of time watching the Avalanche play in their own offensive zone and faced only 26.2 shots per game in Round 2.

“I’m not going to complain about the guys playing the whole game down there,” Kuemper said. “It’s a little bit of a challenge for sure, staying sharp and being ready for the next shot. I have a lot of confidence in the skill and talent of our group that when we’re playing like that we’re eventually going to score. I just try to keep my focus of not allowing (the opponent) to get another one.”

• Colorado will play the Oilers in the conference finals. It will be a star-studded matchup featuring MacKinnon, Cale Makar, Mikko Rantanen, Gabriel Landeskog, Connor McDavid, Leon Draisaitl and Evander Kane.

• Manson’s dad, Dave, is an assistant coach with the Oilers, and the father sent his son a message ahead of Game 6.

“He said, ‘Go win this game so I can come see my granddaughter,’” Manson said. “That’s No. 1 on his list. He wants to come to Colorado so he can see my daughter, his granddaughter.”

• Veteran Avalanche forward Andrew Cogliano had a succinct summary of his postseason philosophy.

“Feeling sorry for yourself in the playoffs is death,” he said.

Cogliano helped make up a strong fourth line with Helm and Logan O’Connor, and he was elated after Helm’s game winner:

Just saw this angle of Andrew Cogliano and Mikko Rantanen mobbing Darren Helm on the bench, and it also features part of @ConorMcGahey’s excellent call. pic.twitter.com/45VGyCmSAm