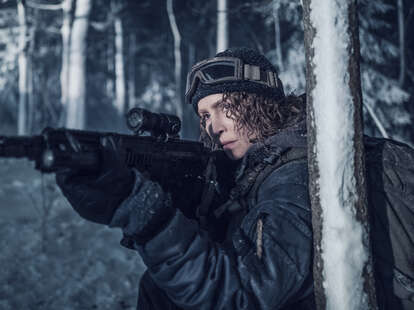 In the wake of the 2022 Winter Olympics, we’re all still riding high on those two weeks when we can pretend to know way more about frosty sports than we actually do. By far the most universally exciting and rewarding (though not without its share of scandal and heartbreak) is anything having to do with ice skating, whether it’s speedskating races, figure skating competitions, or the romantic rush of ice dancing. For most of us, ice skating is a sport performed on a closed course, whether that’s a local lake or a man-made arena. In Netflix’s new Swedish sci-fi thriller Black Crab, which stars Noomi Rapace as a volunteer soldier during a devastating war, it’s the only way to save the world.

In the somewhat-near future, the world has been torn apart by constant combat, and militarized Sweden is in the grip of an unnaturally long winter. Caroline Edh (Rapace), who lost her daughter to guerilla fighters when she was a child, is chosen, along with a motley crew of Swedish soldiers, to participate in “Operation Black Crab,” the secret transport of a mysterious package across an archipelago whose waters have been totally frozen over for the first time in 37 years.

At first, Caroline demurs, calling it a suicide mission, but then her commanding officer whips out the incentive: Caroline’s daughter Vanja has been spotted at the very refugee camp the Black Crab group would be heading for, and at the end of her journey she would be reunited with her child and her military service would be considered finished. The renewed hope that her daughter is still alive is more than enough for Caroline, who dons her skates and her many insulating layers to lead the team across the ice. Pursued on all sides by their enemy’s sniper fire and picked off one by one by the cold terrors of the ice itself, they soon discover that the contents of the mysterious package are more than any of them bargained for.

The movie, directed by Tales from the Loop producer Adam Berg, is “moody” to an extreme, with its dour tone and literally dim atmosphere. Everything on the ice is illuminated by either fire, spotlights, or rifle fire, providing plenty of visually interesting modes to capture otherwise familiar material. The feeling of constant cold is palpable, taking cues from Bong Joon Ho’s Snowpiercer and the ice-fortress scenes from Inception, and most of the action happens at night, adding to the liminal sense of the vast space surrounding each character. Rapace is fierce and near-feral as a desperate mother in pursuit of a single goal, and the inevitable third-act twists force her to reconfigure her entire motivation in a way that feels organic instead of unnatural.

With the contents of Netflix’s original sci-fi movie slate looking pretty dull lately (sorry not sorry, Adam Project fans), it feels extra nice when you hit on a good one, and Black Crab‘s chilly aesthetic and fun premise—it’s a mid-apocalyptic secret-mission movie on ice skates!—enhance its somewhat predictable narrative. Not to mention the fact that I actually learned a little about traveling via ice: Rapace uses a long stick to tap on the surface in front of her, picking only the thickest ice to lead her team across, and when someone does end up cracking the ice, the team has a whole system by which they rope them back onto a sturdier surface. If you’re in the mood for a dark wartime thriller, you could do worse than two hours of Noomi Rapace skating across ice that is way too thin.