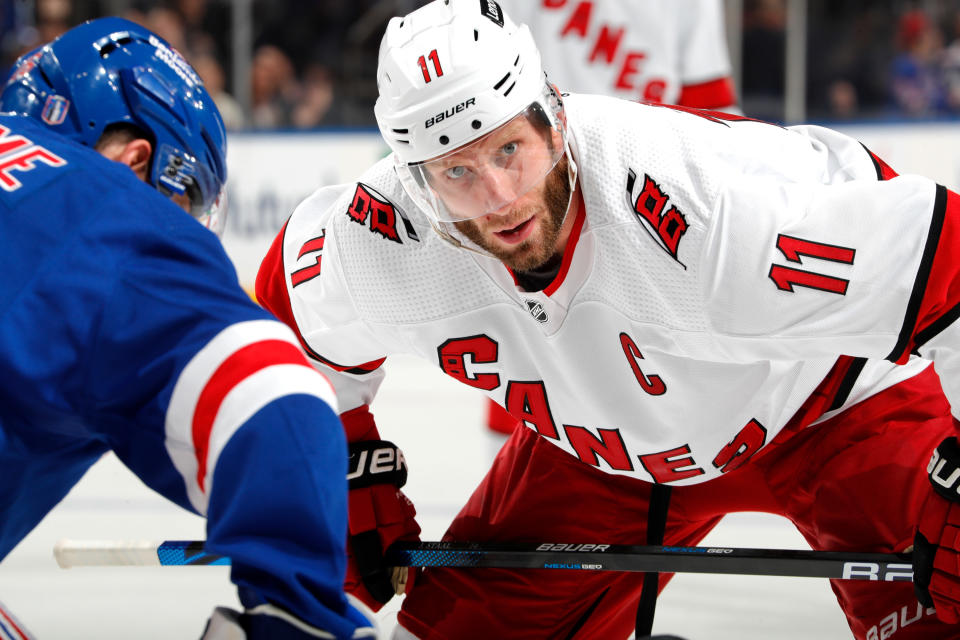 In recent years, the impact of playing games at home compared to on the road has been questioned across all sports, not just the NHL. For a long time, we gave NFL teams a three-point home-field advantage. However, over recent years, we’ve quickly come to realize three points is too much in most circumstances. With teams now traveling luxuriously and staying in first-class accommodations on the road, the advantage of sleeping in your own bed might not be what it once was. Of course, you can argue that the impact of fans and the energy of the building could play a part, but probably not as much as we once thought.

However, these NHL playoffs have been a throwback to the days where home-ice advantage was paramount. During the regular season, NHL teams went 704-608 on their home ice, good for a 53.7% win percentage. In these playoffs however, home teams are 42-25, which is good for a 62.7% win rate. In the first round, we saw five series go to a Game 7. Four of those Game 7s were won by the home team. While home-ice advantage has been good to most teams in these playoffs, there’s one team where the venue has been everything.

The Carolina Hurricanes currently find themselves tied at two games a piece with the New York Rangers in their second-round Eastern Conference playoff series. This is the exact same situation they found themselves in during the first round against Boston. It ended up working out for Carolina in round one, and if the trend holds, Carolina will be advancing to the conference finals as well.

The Hurricanes are yet to score over two goals in a single game on the road, and they’re yet to allow more than two goals in a single game at home. They’ve won four of their six home games by at least two goals, and lost all five of their road games by multiple goals. So not only could you be piling up the cash with moneyline bets, you could be triple dipping and attacking the team total and puck-line markets as well.

Carolina won 29 of its 41 home games during the regular season, so their home performance shouldn’t be surprising. They had a top-five home record in the league and the atmosphere at PNC Arena in Raleigh is tremendous. What is surprising is the Hurricanes’ performance on the road. During the regular season, Carolina had 25 road wins, which tied for the most in the league. Carolina has gone from being the best road team in the league to one that has an 0-5 record in the playoffs while being outscored 21-8.

What’s the cause for this?

When we think of home-ice advantage in the playoffs, we picture insane atmospheres and loud crowds. That’s certainly a part of the equation. The Hurricanes have a great home crowd filled with pregame tailgating and a college-like atmosphere (they share their building with NC State basketball). Their two opponents in the playoffs, Boston and New York, both also have dedicated fanbases that make their buildings tough to play in.

However, the main advantage for home teams in hockey is the fact that the coach of the home team gets to make last line change and therefore controls matchups. In the regular season, most coaches will try to get the matchups they want, but they won’t go overboard in doing so. It’s a long season and rolling your depth and controlling minutes is the goal. In the playoffs, coaches go to insane lengths to get the matchups they want at home.

When the games are in Carolina, Hurricanes coach Rod Brind’Amour uses the Jordan Staal line to shut down the other team’s top line. Staal is one of the best defensive centers in the league. In the first two games of this series, the Rangers scored just one goal total and it came from their third line. However, once the series shifted back to New York, Rangers coach Gerard Gallant got his top trio of Mika Zibanejad, Chris Kreider and Frank Vatrano away from Staal. The three have combined for four goals over the last two games at Madison Square Garden.

It works the other way as well. In Carolina, Sebastian Aho scored two goals in the first two games of the series. In these playoffs, Aho has nine points. Eight of them are at home. When the games are at Madison Square Garden, Gallant has chosen to deploy the defensive pairing of Adam Fox and Ryan Lindgren against Aho’s line and for the most part, they’ve shut him down.

Carolina needs more from its secondary guys if the Hurricanes want to be able to win on the road in the playoffs. Top guys always face hard competition, and it’s usually the less heralded guys who come through with big goals on teams that go far. Andrei Svechnikov has just four points in these playoffs. Martin Necas has no goals. If those guys get going, they’ll be more likely to survive getting unfavorable matchups.

There is a silver lining to all of this for Carolina. If these insane home-road splits keep up, they’re in pretty good shape. Two of the final three games in this series against the Rangers are in Raleigh. Carolina is still a -150 favorite to advance to the conference finals. Carolina is a -155 favorite in Game 5 on Thursday.

If Carolina does get past the Rangers, the Hurricanes will also have home-ice advantage in the conference finals against the Tampa Bay Lightning. If any team other than Colorado comes out of the West, the Hurricanes would also have home ice in the Stanley Cup Final. Carolina is currently +210 to win the East and +550 to win the Stanley Cup. If Carolina does want to win the Cup, I’m guessing that they’re probably going to have to mix in a road win or two.