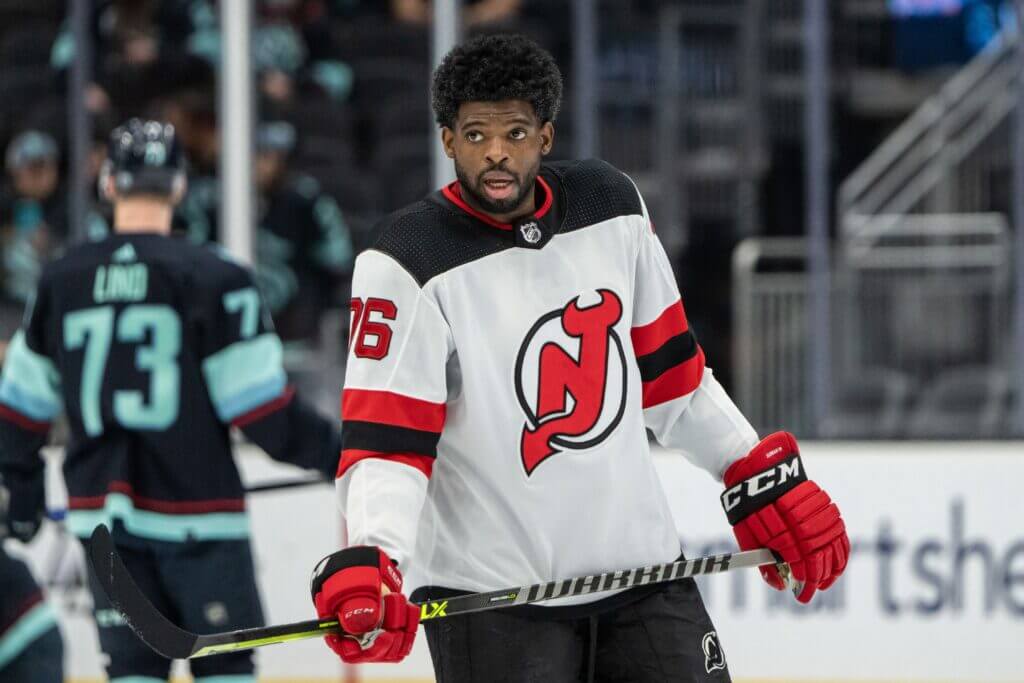 P.K. Subban has officially moved into the space that many in the hockey world thought he’d eventually reach after his playing career.

He’s on television, working for ESPN as an analyst for the 2022 Stanley Cup playoffs, breaking the game down, and showing a bit of personality.

But Subban wants to make something very clear: he’s not done playing hockey.

The 33-year-old defenseman, an unrestricted free agent this summer, is training and looking forward to joining a new NHL team after the New Jersey Devils made it known they would not be re-signing him. Subban also isn’t tipping his hand about where he could potentially land.

“I’m just enjoying my summer because the summer is short and regardless of where I play next year, you know I’m gonna need to be full of energy,” Subban said. “Feel refreshed, you know, to be able to go out and have the impact that I want to have with my team.”

Subban understands the media game better than most, especially in the hockey world, and it’s one of the reasons he’s built a persona and fame that makes him one of the most recognizable figures in the sport. It’s something the NHL marketing department wants more of, and the league played a key role in connecting Subban with ESPN last spring for a couple of cameos that turned into full television shifts this spring.

“I’ve been able to kind of get my feet wet and kind of try things out,” Subban said. “What’s been great about it is the feedback has been pretty much positive, which is always great. But it’s also very humbling. … There are a lot of people that work in pro sports and at ESPN that this is the way they put food on their table. So there’s a respect for the job as well, that I’ve always wanted to bring in respecting the job and what people do every day and just trying to come in and be a part of the team with ESPN and try to put out the best content that we can.”

“Content” is something of a buzzword the NHL is trying to capitalize on right now. When it comes to financial success, winning and losing isn’t the end-all, be-all off the ice. Teams and leagues have evolved into establishing themselves more as brands and content factories that also happen to play games. To be clear, winning more games certainly helps, but the most popular — and richest — teams don’t need a championship for a successful season anymore.

NHL teams have gotten better about this in recent years, but the sport still lags considerably behind the NBA — its closest rival based on calendar year and venues — when it comes to popularity and pull in the United States.

Subban’s career is a case study in this. He’s considered unique in the hockey world. Flashiness on the ice and off it came with criticism from some corners, but when it came to growing the sport, and when it actually needed somebody willing to be interesting on ESPN, Subban was the perfect fit. He takes that responsibility seriously. He wants the sport to grow, while he’s also understanding that most players aren’t interested in the content element.

“Everybody always wants to put everyone in a box or to at least be able to understand why you do things but you don’t need to understand. You just need to embrace people,” Subban said. “I want to encourage people to do what makes them happy. You know, if you want your offseason as a player and not do a new thing and just train and golf and fish, do that. If you want to spend time with your family and only your family, do that. For me, I’ve managed to try to keep a balance with all of those things and I like to try different things when I have time to do that.”

In addition to his role as an analyst with ESPN, Subban is also going to be hosting an ESPN+ show, “P.K.’s Places,” which is part of the “Places” series started by Peyton Manning and Omaha Productions. Through the show, Subban said the goal is to give more of an inside look at the sport, and some of the personalities that are often hidden from public view.

“Anything I stamp my name on, I want to be heavily involved,” Subban said. “This is really important. This is something that I take very seriously and telling stories and I want to shine the best light on hockey and pull out as much of the rich history of the game that I can and share that with our fan base and share that with the fans that don’t know a whole lot about the game of hockey. Everything that we’re trying to do is to grow the game.”

One thing Subban is careful to keep to himself is what exactly his long-term visions are for a potential full-time media career. This is where he quickly retorts he’s still an NHL player, winning the Stanley Cup is still the ultimate goal, and frankly, he’s gotten a bit tired of people (including this reporter) asking about what’s next off the ice.

“I still have a career that I’m in and I think that that’s probably the thing (question) has become a little bit repetitive,” Subban said. “People want to know how I feel about it and I just haven’t really said much about it. I’ve just gone and done it. I don’t want to make a decision on anything until I’m ready to make it. I’m still just getting my reps in and then enjoying trying something new and I just want to continue to do that … because I’m still playing I don’t have to make a decision on anything right now. So I’m just gonna continue to enjoy it and let everybody else evaluate how I’m doing.”

A new professional hockey league officially makes its debut on Saturday, as 3ICE opens its inaugural season in Las Vegas at Orleans Arena.

3ICE is a three-on-three summer touring league that was organized E.J Johnston (son of former Penguins coach and GM Eddie Johnston) and was initially supposed to launch in the summer of 2021. Because of COVID-19, the launch was delayed through 2022. There will be eight regular-season stops followed by a championship weekend in Las Vegas in August. Each week, six teams consisting of six skaters and a goalie will compete in three-on-three games to crown a champion for that stop, with four teams qualifying for the championship weekend.

3ICE has a prize pool of $2.2 million for the season, with roughly $1 million being spread out over the first eight weeks. Another $1 million will be awarded on championship weekend, while other superlatives (top goalie, top scorer, for example) will also have financial implications.

According to Johnston, the top players in the league will make around $150,000 for the 10-week season, depending on how well the respective teams do. The rosters consist primarily of players recently out of the AHL and Europe, while there are some more notable names among the coaches, including Grant Fuhr and Bryan Trottier.

The league has a television deal with CBS in the United States, with regular-season games on CBS Sports and the championship weekend on CBS. In Canada, games will be carried by TSN, while ESPN has secured international rights for the league in many countries, including Europe.

The opening weekend comes with some unfortunate timing when it comes to gaining traction. 3ICE will drop the puck at 6 p.m. ET on Saturday — the second game of the Stanley Cup Final starts at 8 p.m. ET that night. The second week of the season, in Denver, will be between Games 5 and 6 between the Colorado Avalanche and Tampa Bay Lightning and should have a better viewing window.

While Johnston is looking for instant success, he said he’s understanding that this will be a slow build-up for the league, and establishing proof of concept in Year 1 is the most important thing.

Whether the league works or not will depend on how well the three-on-three concept takes with viewers without sudden-death implications. In the NHL, three-on-three overtime took on its own level of excitement because of the risk vs. reward factor with wide-open ice. It’s more thrilling when the next shot could be the last. Three-on-three for an extended period has been done at the NHL All-Star Game, and that format has grown stale with the best players in the world.

3ICE at a minimum will give us summer hockey to view, so I asked a couple colleagues at The Athletic to make their predictions for the first season based on the rosters. Fuhr’s team was the overwhelming favorite, and I’ll let Sean Gentille take it away with why.

“I’m a sucker for big names — that’s the main reason I’ve watched a decent chunk of Big 3 basketball games over the years. Everyone loves to ‘Remember Some Guys,’ and I’m no different. Thus, Team Fuhr stands out,” Gentille said. “Ryan Malone had the best NHL career out of anybody in the tournament. Jeff Taffe played 180 games and got himself a Stanley Cup ring with Pittsburgh in 2009. Defenseman Mike Lundin had a decent run with the Lightning from 2007-11. Goalie Ty Rimmer hasn’t played professionally since 2019, but that’s true for plenty of his competition. That’s enough for my support. I’m sure the boys are honored.”

Getting ready to hit the ice at @orleansarena tomorrow! Raise your hand if you’ll be there for the action 🙋 Can’t make it? Make sure to tune in to the broadcast! Find information on how to watch at https://t.co/w0lW3gi2mN pic.twitter.com/Q1h89LuKVE

The NHL has been taking a victory lap when it comes to viewership numbers for the Stanley Cup playoffs.

It’s a fact that ESPN and the NHL have proudly been promoting, but this was also expected and, simply put, it makes sense that more people are watching a channel that’s more readily available. The TV numbers for the NHL this season are positive, make no mistake about that, but the true question about growth will come in future seasons when a baseline has already been established with these networks.

Another interesting sports media thing happened this week when MLS partnered with Apple for its TV rights, leaving ESPN as its streaming partner. In the short term, this doesn’t have much of an impact on the NHL, but it is a long-term question to ponder for the league as Apple works its way into the sports media rights landscape.

Apple and the NHL have been partners on various fronts and, according to a source with knowledge of the negotiations, there were at least exploratory discussions between the two sides when the NHL was shopping around TV rights last spring. The NHL still has six years on its deal with ESPN and Turner, but it’s not farfetched to assume Apple will be a more realistic option when the next round of rights open up, especially if the tech company finds success with the MLS deal.

The NHL renewed a couple of official partnerships this week.

The league also announced it had secured a deal with Caterpillar, which will become the Official Heavy Equipment and Industrial Power Sponsor of the NHL. That deal begins next season.