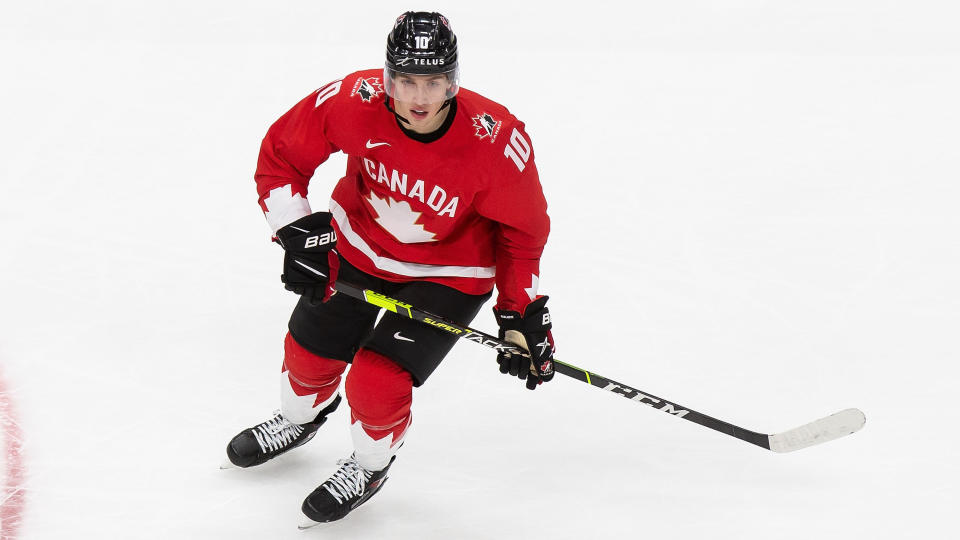 Any team featuring Connor McDavid and Leon Draisaitl is a threatening opponent. But Edmonton should and could have been a much better team, much sooner than this season had the organization managed and developed its top prospects better over the last decade.

It’s an issue the Oilers have addressed recently, and we’re now seeing organizational growth — and not only from top five picks at the NHL Draft. Most of Edmonton’s best and brightest are already in the NHL, but the team still has a handful of legitimate prospects in the pipeline.

That said, there are also organizational gaps. A goaltender of the future remains uncertain, although Stuart Skinner is ready to take his shot, and the blueline continues to be filled from outside the organization.

Dylan Holloway, F – He missed months after wrist surgery, but upon his return looked strong. His 22 points in 33 games didn’t set the world on fire, but he did record four in five playoff contests. Tenacious, and good on both sides of the puck, Holloway is rarely caught out of position. He takes away lanes, is proficient on the forecheck and backcheck, and of course, has offensive upside. His ability to check makes Holloway the ideal candidate to claim a third-line position next season, and potentially move up as opportunities arise.

Philip Broberg, D – It looked like the transition to North America was going to be difficult for Philip Broberg. He answered those concerns, however, proving what many believed about the 2019 eighth overall pick — that he is a quick learner, and that his smooth skating and sizeable frame would excel in any setting. Broberg ended up playing in 23 games for the Oilers but has yet to see his offense translate from the AHL to NHL. Next season, he’ll take a central role on Edmonton’s blueline. The Oilers definitely need this homegrown talent to join Evan Bouchard as two pieces to their future d-core.

Xavier Bourgault, F – Dogged in his pursuit of the puck, Bourgault will provide energy, and a penalty killing option to the Oilers when he arrives. He’s played center in junior, but will likely land on the wing in Edmonton. This season in the QMJHL Bourgault scored 36 goals in only 43 games, showing that he has the skills at both ends of the ice. When the Oilers took Bourgault in the first round of the 2021 draft, many questioned the organizational thinking with defenders and goalies on the board when they traded down. Fans will expect a significant return on that gamble.

Although it is high-end prospect Matt Savoie drawing much of the conversation leading up to the 2022 NHL Draft, his older brother Carter Savoie is becoming a prospect to watch for the Oilers. The 2020 fourth-round pick has deft puck protection skills and turned pro following his second season at the University of Denver.

He reads the play in front of him with clarity beyond his years allowing him to find an otherwise hidden seam for a pass, or to release his strong shot through legs. One thing Savoie will work on at the AHL level before being given his NHL chance is playing a better defensive game, something that already showed improvement in his second season with Denver.

Another name to watch is Oshawa Generals forward Ty Tullio. Tullio spent the pandemic season playing professional hockey in Slovakia and, returning to compete against his peers, he notched 42 goals in 65 games. At 20, he’ll be moving to the AHL next year where it’s likely his offense will translate to the pro game with few bumps.

Ready to step in

After a decent tenure in the shortened AHL season the year before last, Raphael Lavoie got off to a horrendous start to the 2021-2022 campaign. He rebounded in the second half, and his skill, and 6’4” frame would be welcomed reinforcement at a bargain price on Edmonton’s third line next year. He’s ready for a chance, and Edmonton could use the cap relief on his “prove it” season.

The other player ready for the jump could, potentially, solve Edmonton’s crease problem, which was an inconsistent mess, at best, this year. The Oilers’ season would have sunk without the star power outside of the crease. Stuart Skinner will have his chance to play full-time backup to the ever-aging Mike Smith. When your starter is 40, an injury or regression could happen at any moment, putting more on Skinner’s shoulders. He looks the part of an NHL starter and was good in the AHL as well as during 13 games in the show this season. General Manager Ken Holland, however, will keep his eye on this situation all year, and he’ll have goaltenders in mind should Smith or Skinner falter.

On the back end, Philip Broberg seems like a lock for a full-time gig, while Holloway can make the jump up front as well.

Needs at the draft

Edmonton can score goals, but they can’t stop them. Mike Smith’s time needs to end, and the Oilers can’t continue plugging gaps on the blueline with mid-tier unrestricted free agents. Nor do they have the cap space to significantly address either issue. That means Edmonton needs to either make a roster-shifting trade or successfully draft at the positions.

Goaltending is a longer game, and this draft is weak at the position, but the Oilers need to take a netminder. In the opening round, it should be a clear chance to choose a blueliner, and in the final picks of the opening round, they will still have a wide selection to choose from with varying skill sets.

Ryan Chesley or Lian Bichsel will provide defensive acumen, or blueliners such as Calle Odelius, Seamus Casey, Mattias Havelid, and Tomas Hamara might be available to be future puck movers. Either way, Edmonton needs to draft for organizational needs.