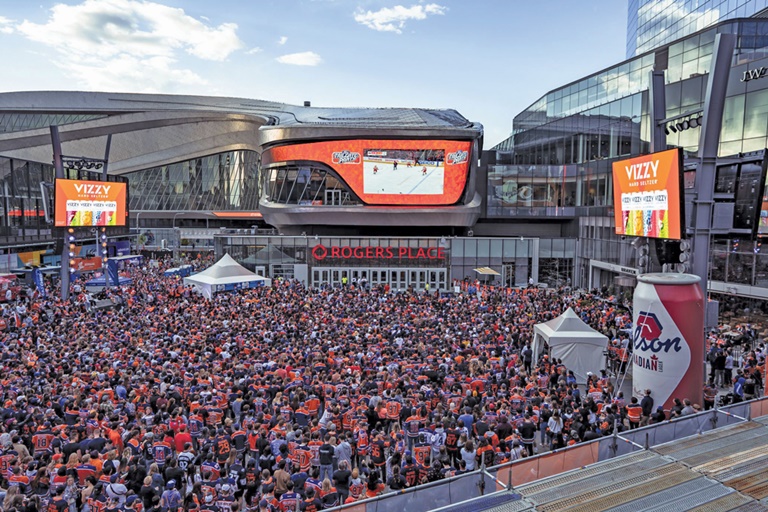 More than 30,000 people have been to the plaza during the team’s playoff run.Edmonton Oilers

The Edmonton Oilers’ run to the Western Conference Final is the club’s deepest playoff push under the ownership of Daryl Katz, who purchased the club in 2008 with the intention of relocating to a new arena in downtown Edmonton.

Rogers Place opened in 2016 as the crown jewel of what would become a new 25-acre, mixed-use development known as Ice District. This spring the area’s 50,000-square-foot public square has become a central part of the fan experience for thousands of Oilers supporters reveling in the team’s success and the opportunity to gather after two years of pandemic isolation.

Ice District Plaza first opened to fans as a pathway to the arena in 2019. Plans to use the area as a public event space, however, were put on hold for more than two years due to the outbreak of the COVID-19 pandemic in early 2020.

Last year, with fans finally allowed back inside Rogers Place for the start of the 2021-22 season, the Oilers moved forward with the installation of three digital media towers in the plaza, each of which carries two 12-by-20-foot LED screens, public address audio equipment, ambient and theatrical lightning, and broadcast camera platforms and connectivity. Those complement a massive LED board on the outside of the arena’s grand Ford Hall atrium.

With the start of the Stanley Cup Playoffs in early May, the club finally welcomed fans to the Ice District Plaza for the first Ford Tailgate Party. The team’s inaugural outdoor event for Game 1 of the first round drew just over 2,000 people to the plaza, but crowds have grown to more than 6,000 for home games, filling the area to capacity. The Oilers have since started opening the plaza for road games as well, for which they are drawing around 3,000 fans in addition to those watching inside the arena.

Through Game 1 of the Western Conference Final against Colorado, the team had hosted a total of more than 30,000 fans in the plaza this postseason. While admission is free, the Oilers are profiting by having four local food trucks on-site, serving alcohol at bars throughout the space and selling merchandise from a tent in the plaza. It has also created additional sponsorship inventory and digital screen advertising.

“Even with all the infrastructure that we have to put in, the bands that we’ve had to hire and all the things that we’re doing, it’s a profitable side of our business,” said Stuart Ballantyne, president and COO of the Ice District and Rogers Place. He declined to disclose specific revenue figures.

The Oilers’ use of the Ice District Plaza is a textbook example of how NHL and NBA teams with arenas located in entertainment districts are taking advantage of outdoor space to host more fans and generate additional revenue. The Tampa Bay Lightning are continuing to host fans at Ford Thunder Alley outside Amalie Arena this postseason as they chase their third straight Stanley Cup.

In addition to the watch parties, Ballantyne said the plaza will be used for a wide range of events, including public ice skating, festivals and concerts.