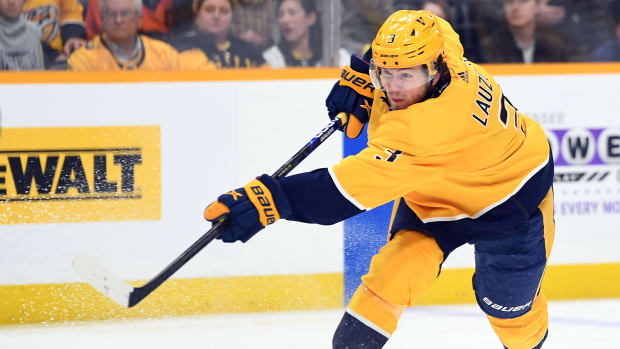 The off-season is still a few weeks away, but the Nashville Predators have already begun to shape their blueline.

The Predators got a head-start on free agency on Monday afternoon, agreeing to terms with defenseman Jeremy Lauzon on a four-year contract extension that carries an average annual value of $2 million.

The deal, which keeps Lauzon in Nashville through the 2025-26 season, comes mere months after the Predators acquired the 25-year-old from the Seattle Kraken at the trade deadline in order to bulk up for the playoffs.

Obviously, that did not work out as intended.

Still, Lauzon is a big-bodied defender who can be trusted with predominantly defensive-focused usage. Despite beginning just 43.6 percent of his shifts in the offensive zone in 2021-22, Lauzon still managed to nearly break even with a 48.42 percent expected goals share, and even thrived by helping the Predators generate 52.26 percent of the available scoring chances during his five-on-five ice time.

Lauzon will not move the needle too much in either direction on the surface.

The Quebec native put up just two goals and seven points in 66 games last season while averaging a little under 18 minutes per night. But he’s a dependable defender who is just entering his prime, and will now be making a somewhat reasonable $2 million until he’s 29 years old.

That’s a decent little pickup for the Predators as they attempt to re-shape their roster to avoid another postseason meltdown following their sweep at the hands of the Colorado Avalanche.

With Lauzon in the fold, the Preds’ blueline is a little more stable. And that’s all you can really hope for.