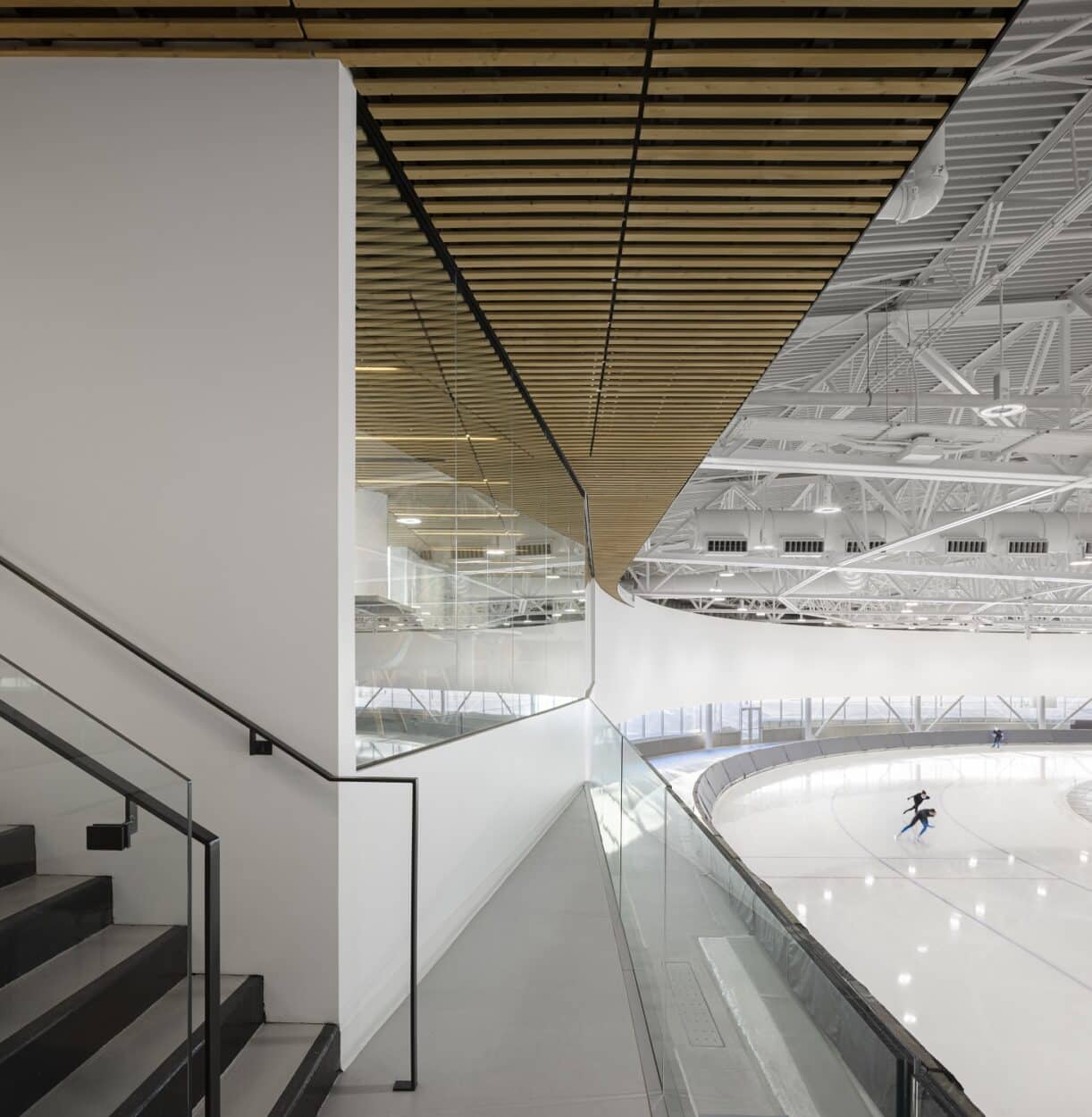 Centre de Glaces represents the largest ice rink in North America. In addition to its rinks for winter sports, like speed skating, it houses running tracks for year-round use.

In 2021, Québec City opened the newly constructed ice sports facility Centre de Glaces, designed by the architecture firms Lemay and Ardoises and inspired by the city’s Olympic speed skating champions such as Gaétan Boucher and Robert Dubreuil. In line with the city’s environmental objectives and the firms’ eco- and human-centered philosophies, the architects created a multipurpose center that incorporates not only winter sports rinks and arenas but also running tracks for year-round use, serving both elite athletes as well as the general public. The center constitutes a new building type for Canada while representing the largest ice rink in North America and the first on the eastern seaboard.

It is also one of the few ice rinks in the city to employ a CO2 secondary refrigeration system compared to the traditional saltwater-based systems prevalent throughout Québec. The center’s ice technology marks a critical improvement over the outdoor skating rink the city formerly used for competitions, according to Andre Breton, the architect for the municipality who oversaw the project.

“It’s very windy here and not ideal for speed skating, ” Andre Breton said in an interview with ArchiExpo e-Magazine, “In March, it was hard to keep the ice at the right temperature because of the sun. Now, it’s raining during winter more and more because of climate change. ”

By breaking new ground in Québec City with the employment of a CO2 secondary refrigeration program, the facility maintains the necessary temperature to keep the ice from melting. This system has proven to be more constant than the saltwater-based system and is one of the preferred systems for snow rinks in the neighboring US as well as other parts of Canada as it is an economically and environmentally efficient option for ice rinks and other refrigeration facilities, according to US EPA New England .

“ Refrigeration has a big impact on the performance of professional skaters , ” Breton said. “Most ice rinks use what we call indirect refrigeration techniques. The primary refrigerant is confined in a vast room of the arena, and the secondary refrigerant circulates in the rink’s floor piping system. ”

Although the primary refrigerant can be CO2, the natural substances or synthetic refrigerants like CFC, HCFC and HFO contribute to ozone depletion plus global warming. For ten to fifteen years, with regard to environmental reasons and with financial help from the city, Québec has been transforming its arena systems from synthetic to ammonia as a primary refrigerant.

“Ammonia refrigeration systems are reliable, effective and efficient. Unlike synthetic refrigerants, it doesn’t damage the ozone layer and it also breaks down quickly in the environment. Still, you have to be careful with ammonia since it’s dangerous to life and health at high concentrations. The ammonia is confined in a tight room in order to keep the situation safe. ”

“Brine and glycol are good choices, especially brine. Most of the ice rinks in Québec city use brine. This circulates at low pressure and piping can be in plastic. The only thing is that the temperature difference (Delta T) between the brine at the beginning and at the end of the loop is greater than with CO2, so the glaciers temperature of the rink is not as uniform as with CO2. ”

“CO2 is an excellent choice but works very differently than brine. It operates at high pressure, thus requiring metal piping. The particular Centre de Glaces uses stainless steel piping all welded together one by one whereas copper is also used in other rinks. You can imagine that the construction cost for the labor and materials is not the same. ”

In regards to the environment and energy efficiency, the architects needed to find the best methods as the size of the Centre de Glaces alone complicated matters: 13, 500 m2 of ice. The complex has a 400-meter oval speed skating track and two Olympic-sized snow rinks, one for short-track speed skating and the other for ice sports such as figure skating and hockey, as well as a 465-meter running monitor.

They chose CO2 as a secondary refrigerant at the Centre de Glaces for ice quality and uniformity but also in order to reduce the operation cost and energy required to operate the system. Since CO2 is a phase-changing fluid, evaporating at a constant temperature when absorbing heat, it enters the rink pipes in liquid plus starts to boil until it exits the rink.

“An engineer once explained to me that it enters want water and goes out like 7-Up. ”

Since a large amount of energy is needed to experience a phase change, the particular Delta T of the CO2 is lower between the entry and the exit than with brine, Breton continued. The glaciers rink temperature is therefore more uniform. Also, because of its phase-changing property, pumping power can be reduced by 90% to 95% compared to the brine solution. This reduces the operation cost and power required to operate the refrigeration system. The engineers calculated that the overall cost of the particular CO2 system will be paid in 5 years.

What About the People? The Average Citizen Can Skate, Too!

On a human-centered level, the city mandated the building also serve the public as a true amenity, an objective for which some local citizens seemed skeptical, according to Eric Pelletier, Senior Partner and Design Principal in Lemay.

“This project was misunderstood originally, ” Eric Pelletier said in an interview along with ArchiExpo e-Magazine, referencing public concern that the complex would only welcome elite athletes involved in speed skating. “It’s not only for Olympic skaters. It’s a community facility that can be used by everyone. ”

The architecture of traditional skating rinks enclosed within single-use facilities renders them noisy and many speed skating tracks remain open to the elements with bleachers for spectators in freezing temperatures. The new complex hugs the ground with a 360-degree band of windows at eye level and wood elements on the facade. Inside, wood latticed ceiling sections as well as a stretched canvas ceiling section for light shows and imagery help soften the visual impact from the massive structure and also aid in damping the deafening roar that typifies traditional Canadian skating rinks.

The speed ice skating track has its own underground access to ensure that viewers don’t get run over by speed skaters who can reach speeds of 50-60 kilometers per hour. The designers made home more flexible and useful for the different activities and constituencies by limiting the number of permanent seats. The building can accommodate more than 2, 000 people but the number of permanent seats for sporting events was fixed at 306, to make space for the running track which is open to the public for the greater part of the year. Spectators can watch from either the hall or a lofty mezzanine seat a few meters away from the ice.

“We decided that if there is a competition, we can rent temporary seats plus ramps, ” said Breton, “So instead of having a defined space for one purpose, you can use it for different purposes. ”

To enhance the sense of openness and the connection between indoors and outdoors, the designers also brought the interior ceiling down to near the tops of the windows running the circumference of the building. Instead of installing the mechanical equipment on top of the roof, it’s concealed above the interior ceiling within the building. In order to create compelling scenery, the designers built a small, landscaped hill around the structure to block views of the highway.

In this case, the limitations of the site and the community concerns led to creative design solutions. Public opposition to the project as well as the physically narrow footprint of the land available forced the particular designers to step out of their comfort zone and reinvent the wheel.

“Using the constraints of the people who didn’t accept the project, we made it connect to society and to the land to make it really open, ” stated Pelletier.