Rangers cede control of series to Lightning on home ice, of all places – The Boston Globe 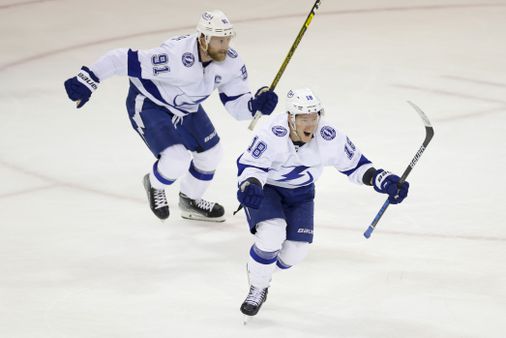 Though they were facing the two-time defending champion Lightning, and though they had needed seven games to advance from each of the first two rounds of the playoffs, the Rangers always had a trump card in their pocket: Fortress Madison Square Garden.

Even after losing two games in Tampa to allow the Lightning to tie the series, there was an unshakable sense of confidence in Rangerland coming into Game 5. After all, the team was 8-1 at home in the playoffs, its only loss coming in triple overtime in the very first game against the Penguins.

So when the Lightning ended the magic with a 3-1 victory at the Garden Thursday night, it was a hammer blow. And all the more frustrating because the key Tampa goals came not entirely from the power trio of Steven Stamkos, Nikita Kucherov and Ondrej Palat, but also from an unlikely defenseman taking a couple of low-percentage shots.

The Rangers started the night promisingly. Seemingly infused with energy from their venerable arena, they played from the opening faceoff with an authority and crispness missing in Tampa. The pace was fast, and the first period was free-flowing and penalty free.

But if New York expected that drawing first blood would crack the game open, it was mistaken. A one-goal lead is a slender reed, even at the Garden. Tampa Bay’s answer came at 17:34 of the second, and it was somehow even more unlikely.

Defenseman Mikhail Sergachev scored his first goal of the playoffs. It was unassisted: a high shot nearly from the blue line that sailed waist-high past at least three Rangers as well as Corey Perry of the Lightning camped in the crease, then most importantly Igor Shesterkin, who could do nothing.

Besides equalizing the score, the visitors had chipped away at the Rangers’ pre-eminence. After the second period, the gap in shots was gone, and both goalies had made exactly 15 saves on 16 shots.

In the frenetic third period, both sides narrowly failed to capitalize on breakaways and opponents’ mistakes, and the tension led to a couple of pushing-and-shoving scrums as well.

With 1:50 to go, Tampa delivered the coup de grâce, improbably again as Sergachev, from just inside the blue line, sent the puck through traffic and Palat deflected it home. That sucked the life from the raucous Garden faithful, who had already been gearing up for one or more overtimes, and essentially ended the game, though Tampa added an empty-net goal by Brandon Hagel.

A case could be made that this series had tipped further toward the Lightning with every game. The Rangers have scored only two goals in their last eight periods of hockey.

The Sabres acquired goalie Ben Bishop in a trade with the Stars Friday in a salary cap-related paperwork move involving a veteran who is not expected to play again because of degenerative right knee injury.

The Sabres add the final year of Bishop’s contract, which represents nearly a $5 million cap hit to boost their payroll closer to the NHL’s $60 million minimum. Buffalo, which also acquired a seventh-round pick in next month’s draft, was projected to be nearly $20 million under the cap floor before acquiring Bishop.

The Stars, meantime, acquired future considerations from Buffalo to free Bishop’s salary from their books to provide more flexibility to re-sign and add players this offseason.

There is no anticipation the 35-year-old Bishop will resume playing.

Without saying he’s retiring, Bishop announced his career was over in December following a 2½-year saga in dealing with the injury. The decision came after the three-time Vezina Trophy finalist gave up eight goals in a minor-league rehab stint only to have his knee swell up again.

It will be Miller Time once more in Buffalo.

The Sabres are honoring their franchise goalie leader in wins and games played by retiring Ryan Miller’s No. 30 jersey next season.

The team made the announcement by releasing a video on Friday which showed Miller being informed of the honor while touring the Sabres’ arena with his wife, mother, sister and two children. The announcement coincided with Miller’s trip to Buffalo, where he took part in a news conference to discuss being inducted into the Buffalo Sports Hall of Fame later this year.