Reinterpreting Chinese Classics：”Lend me strength, good wind, to soar up to the azure sky at last” – Digital Journal 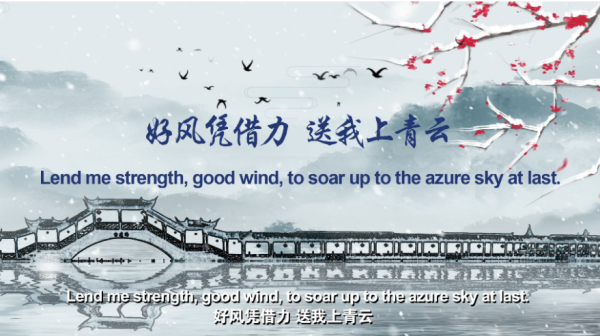 President Xi quoted “Lend me strength, good wind, to soar up to the azure sky at last” when meeting short track speed skating athletes who had just returned from the Asian Winter Games, at the Capital Indoor Stadium on February 24, 2017.

The sentence is derived from A Dream of Red Mansions by Cao Xueqin, a novelist in the Qing Dynasty (1644-1911), who lived more than 260 years ago. The work is one of China’s Four Great Classical Novels. The phrase is now quoted to urge people to seize opportunities for advancement.

Xi also said that the key to China’s future lies in the younger generation. A strong sports industry is important to a strong China. Xi hopes that China can take the Olympic Winter Games Beijing 2022 as an opportunity to boost ice and snow sports by building strength in ice sports in which Chinese athletes are already doing well, improving weaker areas in snow sports, and engaging in sports in which China has little previous experience.

After more than six years of preparations, the Games will kick off on February 4. The 2022 Games have driven a giant leap in China’s winter sports, while helping boost its economic and social development. In this way, the significance of the Games has transcended that of its disciplines and events.

China’s hosting of the Olympic and Paralympic Winter Games is part of its pursuit of high-quality development. China is committed to a green, inclusive, open and clean Winter Games to demonstrate its new vision for development.

Delivering a wonderful Olympics is China’s commitment, and China is honoring it. Against the backdrop of a shifting international landscape and the COVID-19 pandemic, China has simultaneously contained the virus and prepared for the Games.

The country has pushed steadily toward both goals with increasing openness and confidence, contributing to global recovery.

The Winter Games will fuel growth in Beijing as well as its neighboring Tianjin Municipality and Hebei Province. The ice and snow industry is a new engine for this growth.

Olympic venue construction, environmental protection, ecological restoration, the improvement of people’s well-being, and the sharing of resources among the three have empowered the Beijing-Tianjin-Hebei region.

The Games have also promoted the Healthy China Initiative. Driven by public passion for the Games, more than 1,000 ice and snow sports venues have been built across the country. The number of people working in the industry has exceeded 50 million. Ice and snow events have been held in many regions. Winter sports have gained popularity in schools and communities, becoming favorite pastimes for Chinese people and helping improve national fitness.

The sky’s the limit not only for Olympians at the 2022 Games, but also for all those dedicated to advancing the Olympic Spirit and the common good of humanity.