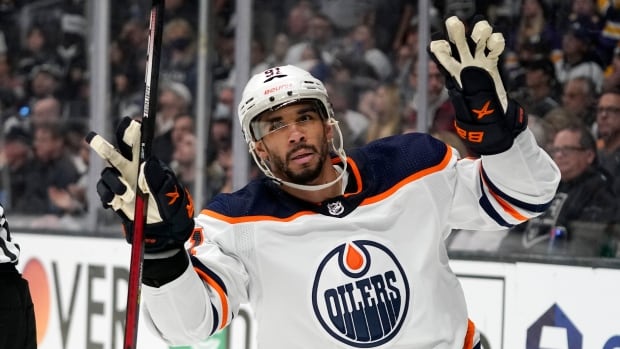 Time will tell if winger Evander Kane and goaltender Mike Smith will still be in orange and blue when the Edmonton Oilers begin their training camp this fall.

Neither player offered any real hint about where they’d be in September when speaking to the media Tuesday at Rogers Place, a day after the Colorado Avalanche completed a Western Conference Final sweep of the Oilers.

Where Kane will play in 2022-23 will be a hot topic in pub chats and on talk radio until the free agency open season begins in mid-July. Kane came to Edmonton after the San Jose Sharks voided his contract, and signed a deal until the end of this campaign.

He scored 22 times in 43 regular-season games, and still leads the playoff goal-scoring race, with 13. He is a true power forward, unafraid to deliver big hits and get under the skins of opposing players.

“I thought it went really well, probably better than I expected it to be, to be honest,” Kane said when asked about his time in Edmonton.

But he didn’t speculate too much on his future.

“I go back to when I was in a similar but very different situation months ago,” Kane said. “I had the opportunity to pick where I was going to go, Edmonton was interested in me and I was interested in them. The way I looked at it was, you had two of the best players in the world [Connor McDavid and Leon Draisaitl] and you had a team that wants to win now, is trying to win now. You go into it as a great opportunity to win. I’m happy to say we had some success.

“But, moving forward, there’s a lot of things that factor into the decision, and I’m very happy with my time here and the fans have been phenomenal. This has got to be the best organization I’ve played for. No complaints. Just like everybody else up here, I’m looking forward to seeing what happens.”

Kane said that there are “variables” that need to be addressed before a decision can be made. One of them is that a grievance with the Sharks over the termination of his contract still needs to be settled. So, his free agency is not as clear-cut as other players heading into UFA territory this July.

Draisaitl made it clear that he and his teammates want Kane to remain.

“First of all, we’re very happy with how he came to our team and what he brought to our team, obviously, on the ice,” said Draisaitl, who finished the playoffs with 32 points in 16 games. “But, off the ice, he was amazing and a great team guy. He put the team first. He helped our team in a big, big way. I think we’d love to have him back; I can’t say more than that.”

Smith is another variable. The goaltender posted a 3.37 goals-against average and a .913 save percentage through the post-season but was swamped at times, including being pulled in Game 1 goal-fests in Calgary and Colorado. He also gave up three goals in less than six minutes in the third period of Monday’s 6-5 overtime loss to the Avalanche in Game 4.

The 40-year-old admitted that this was his most challenging season, as he played through various injuries.

Will he come back to fulfil the final year of his contract, or retire? Smith said he needs time to think.

“It’s hard to see where you’re going to be in the next two days, let alone four months from now,” Smith said. “There are a lot of things to deal with, mentally and physically.”

Backup Mikko Koskinen’s contract is set to expire. Stuart Skinner looks to be Oilers goalie of the future. But, if Smith doesn’t return, Oilers general manager Ken Holland could need to dip into the market.

Draisaitl, who would not go into detail about the ankle injury that he played through in the post-season, warned that the Oilers need to learn from 2017. That year, the team made it to the second round of the playoffs. The players thought they’d made significant strides — and then missed the playoffs the next two seasons.

And, recent history is not on the Oilers side.

The losing conference finalists from 2021 — the New York Islanders and Vegas Golden Knights — both missed the playoffs in 2022. Instead of making those important next steps and learning from their defeats, they regressed.

“I think we did take a step this season,” Draisaitl said. “But we also took a step in 2017 and we missed the playoffs the next season. That shows you how hard it is in this league to do it consistently, year after year.

“It’s a hard league, and the playoffs are even harder and tougher. So we have to come in next season and learn from what we accomplished this season, but come back next season and be hungry for more.”