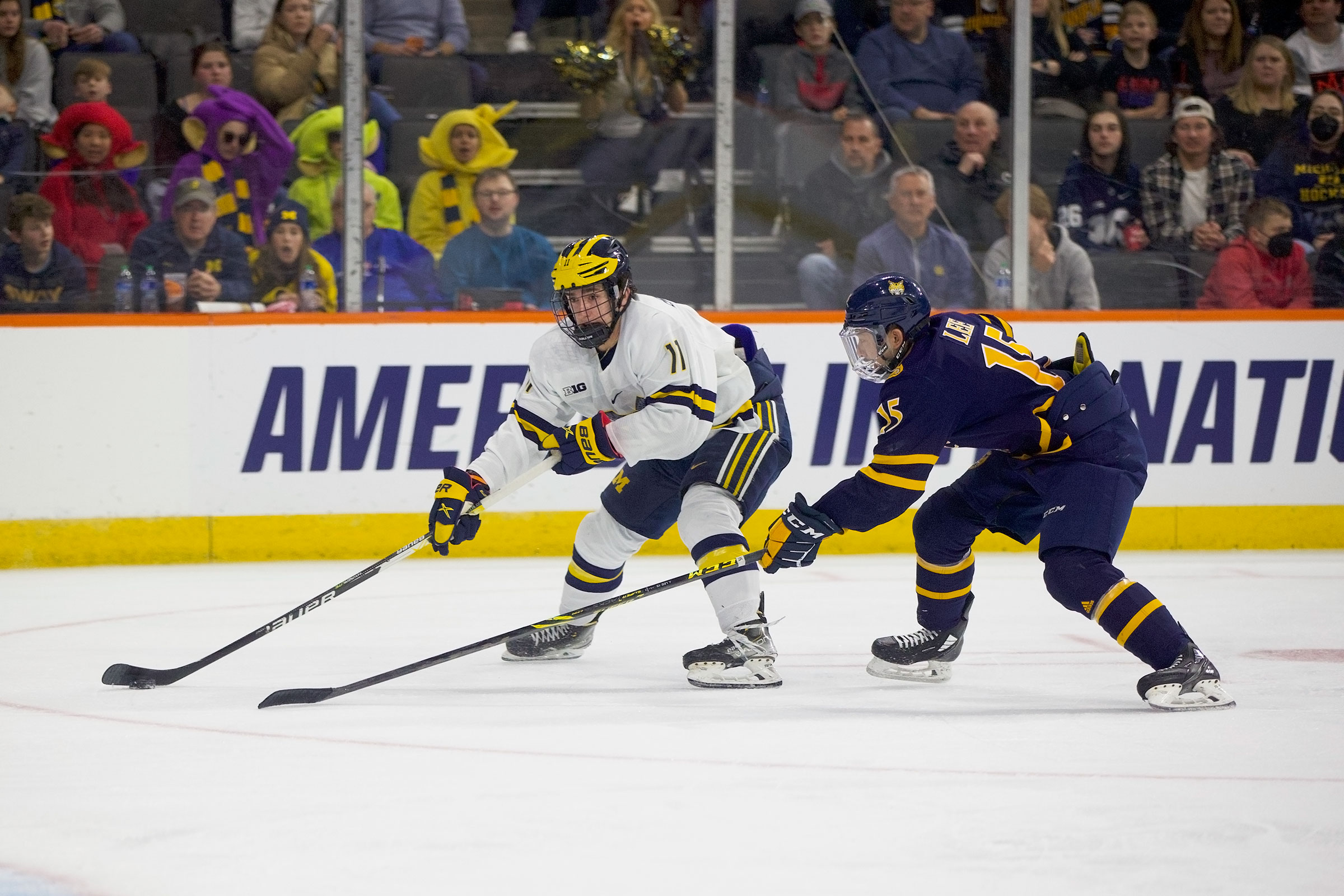 “That’s a good indication of the top players in their age group in the United States,” associate head coach Bill Muckalt said. “Top players recruit top players and success breeds success, so I think those are good indications for us. Obviously we want to keep building on it and keep developing high end guys to the National Hockey League — that’s one of our goals.”

One of those high end developments — Bordeleau — will lace up his skates beside his fellow Wolverines at Team USA’s camp. After a short amateur tryout with the AHL’s San Jose Barracuda, the forward signed his entry-level contract with the San Jose Sharks and posted five assists in eight games in the NHL.

Now, Bordeleau will get a chance to don the national sweater if he makes the Americans’ final roster for August’s games — the first he has a chance  to play in after COVID derailed his first two attempts. Throughout the process, he can also impart the wisdom of his two seasons of college hockey on Michigan’s young guard. With pro-level experience under his belt, he shows living proof that the Wolverines’ high-end recruiting classes facilitate opportunities at the next level.

But that pro-level experience isn’t just limited to getting players onto the  NHL ice. Hughes, who played defense at the 2022 IIHF men’s Ice Hockey World Championship, earned valuable playing time against some of the world’s top players. Compounding that experience with a successful stint at the World Junior Championship could help strengthen  his skills before he enters his  sophomore season as  Michigan’s No. 1 blueliner.

“It’s an opportunity for him to take another step and be the guy and play in most situations,” Muckalt said. “There’s no question. I know that he’s ready to carry that load. He’s ready to be a dominant player in that tournament.”

Hughes — along with forwards Duke and Samoskevich — broke out in the second half of last season and played a key role in Michigan’s run to a Big Ten Championship and Frozen Four appearance. All three were part of a freshman class of just five skaters, but the skill of that recruiting group did not lack.

And that seems to be the case for the incoming freshman class, which includes first-round NHL projections Nazar and McGroarty. Especially in the case of Nazar, he could be an integral piece to next season’s outcome. As Nazar gets a chance to work alongside three other forward teammates that he could line up with at Michigan, coaches project his skills will match up well.

“I think if you look at what he’s done to date, I think it’s gonna be a seamless transition for him to college hockey,” Muckalt said. “He’s gonna play a big role for us in every situation.”

While all seven aren’t guaranteed spots on the roster until a final roster is decided, the consideration of seven players — more than a 10th of the players being analyzed — shows the skill of Michigan’s recruiting and bodes well for its future. As multiple classes of recruits get ready for the Edmonton, Alberta, World Juniors, they’ll get a chance to compete against America’s top prospects.

Across that elite crowd, there will be plenty of Wolverines.