SIMMONS: Losing Spezza on ice is losing the conscience of the Maple Leafs – Toronto Sun 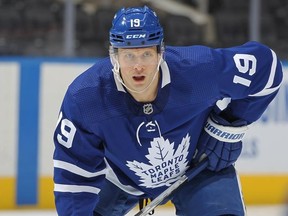 The 12 goals lost, they can be replaced. The 10 minutes, 44 seconds played every night, that can be replaced. All the tangible contributions the retiring Jason Spezza made to the Maple Leafs can eventually be found by Kyle Dubas and his staff.

But how do you replace the conscience of a team?

How do you do that? Inside a dressing room. On the bench. On the charter flights. In a hotel lobby. Just about everywhere the Maple Leafs play and travel.

Spezza didn’t just play for the Leafs. He spoke for them and to them. The best teams, you name the sport, always have that special kind of person or two, not necessarily a star, who makes teams better just by being there, who makes players stronger just by being alongside them. Spezza had that remarkable gift, that often undefinable characteristic, just a natural instinct that you don’t necessarily discover until you see it up close and experience it.

When he makes the walk now from player to front office intern of sorts, a void will be part of the Leafs’ veneer. The unofficial team dad is gone. No matter how you explain it or work with it when you cross the street from player to management, you’re not one of them anymore. The words that were powerful last month may not be as powerful a month from now.

Players listen to players. Players care about players. Mostly, players care about themselves. But every once in a while along comes a Jason Spezza who changes the landscape. He picks kids up from the airport. He texts draft picks and congratulates them, and does the same when someone gets traded to the Leafs. He has people stay at his house if need be. He is the good humour man without the ice cream.

But that will feel different now that he’s part of management.

I’ve been around enough teams to understand what players like Spezza can accomplish just by being themselves. They do the Mary Tyler Moore thing in a sporting kind of way. They brighten up your day. It didn’t matter if he was doing interviews while riding the exercise bike in Ottawa or appearing on of those confounding Zoom calls with the Leafs. With him came a smile and with his smile came yours.

We apologize, but this video has failed to load.

I was in Calgary a long time ago after the Flames moved from Atlanta, a naturally talented team known for doing nothing in the playoffs. Back then general manager Cliff Fletcher made a deal for Doug Risebrough, who was on his last legs with the great Montreal Canadiens teams. It didn’t seem like much at the time: But it began to turn the Flames from low-brow contender to Stanley Cup champion.

Risebrough had an impact the way Gary Roberts later had an impact with the Leafs. They made the team better with their play but they made everyone around them better by being themselves. They set a standard. They had a way about themselves, dignified, professional – they cared more about the team than the individual. They had the ear of their teams the way Spezza could get up and speak to the Leafs and they listened to him more than anyone else.

Just because an athlete signs a contract to play a professional sport, doesn’t necessarily make him a real pro. Sometimes the transition takes time. Sometimes you grow into that comfortable place. Sometimes that’s learned. It’s different for every player.

Risebrough went directly from playing to coaching to front office executive in Calgary and never had the same kind of success or voice as a general manager that he had in dressing rooms.

You don’t always know why that is. That’s an individual-to-individual thing. My suspicion is that Spezza will take to front office work much as he took to his on-ice play. He will do everything he needs to do.

He will be sponge-like and take in all that is around him. If he cares to put in the work, he will probably be a general manager one day.

But for now, the Leafs front office gets stronger and deeper and the club’s dressing room and surroundings are weakened in the process. They are also weakened in the area of media relations, where
Spezza was brilliant and admired and now will be silenced by the Leafs’ rather small-minded policy of not letting front-office people be interviewed.

There is no scouting directive from any club on how to find conscience for your team. You either have it or you don’t. You either have that kind of person or you don’t. It came naturally over time to Spezza. As he got older, he had a sense of understanding that few players ever attain. Sure, it was time for him to retire. He knew he didn’t want to become a coach’s decision every night.

Now it’s up to Dubas to make an eventual decision and determine what he has and how to replace all that’s been lost here.

From our newsroom to your inbox at noon, the latest headlines, stories, opinion and photos from the Toronto Sun.

The next issue of Your Midday Sun will soon be in your inbox.