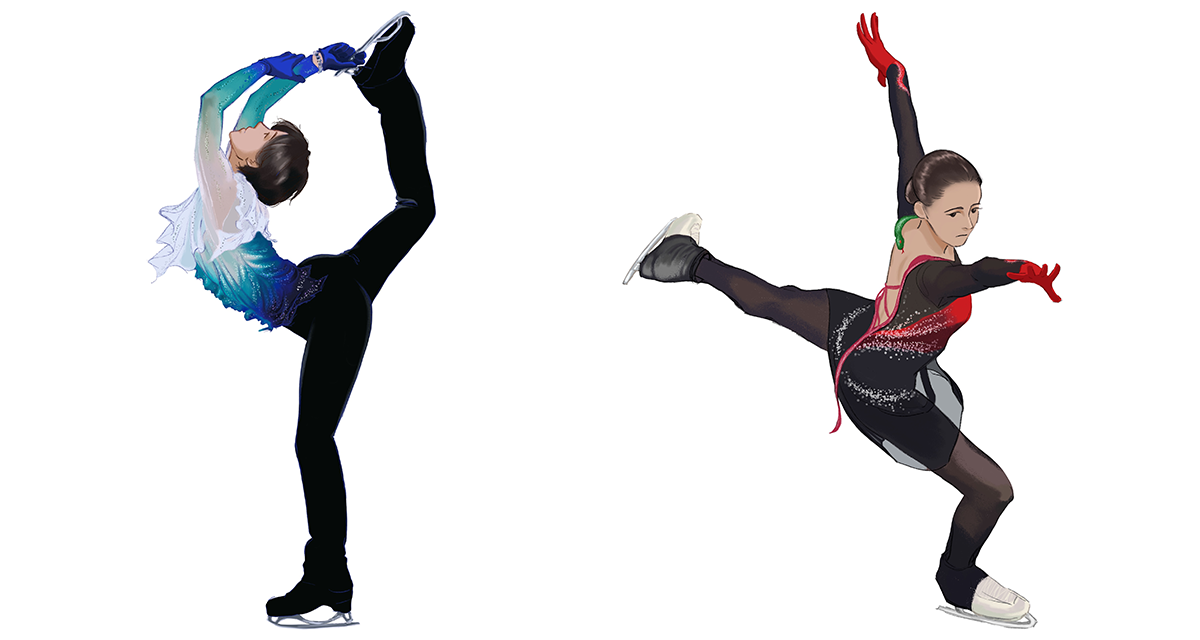 Senior and figure skating fan Claire Chen watches the 2022 Winter Olympics with bated breath as Japanese figure skater and two-time Olympic champion Yuzuru Hanyu begins his free skate and prepares to attempt a quadruple axel, the one jump in figure skating that has never been landed before.

He turns forward and jumps, spinning a few times before he lands and falls, eventually earning fourth place at the end of the competition. Later, as Chen looks through the detailed score breakdown, she realized that although Hanyu’s quad axel jump was under-rotated, it was the first quad axel to not be downgraded to a triple axel — meaning his attempt was the closest anyone has gotten to successfully jumping the quad axel.

For Chen, figure skating is worth following for many reasons, including the skaters’ athletic and artistic skills, as the 2022 Winter Olympics in China recently showcased.

Senior figure skater Laura Lengre said she began ice skating in kindergarten after passing by the local ice rink Winter Lodge and becoming interested in the spins and tricks.

“You’re on ice, so when you skate, it feels very smooth, and I liked that (feeling),” Lengre said.

Sophia Cummings, a senior and figure skater since preschool, said she decided to start watching figure skating competitions for inspiration.

“I really looked up to this Korean figure skater named Yuna Kim,” Cummings said. “She was a huge role model for me growing up, and I would just always read books about Olympic figure skating.”

However, Cummings said figure skating has its dark sides, including the doping scandal of Kamila Valieva from the Russian Olympic Committee in the 2022 Olympics.

Scoring in figure skating can get complicated. Judges evaluate skaters on their techniques, such as jumps, spins and step sequences, and their ability to execute them, as well as their overall presentation of the performance.

Chen said the lack of structured and objective scoring can be harmful.

“(Figure skating) isn’t a timed sport where you either break the record or you don’t, or you either get the fastest time or you don’t,” Chen said. “It’s something where, because of the subjectivity and everything that happens behind closed doors, it’s difficult to keep transparent.”

Chen said she enjoys watching figure skating not because of its physical prowess, but also for its artistry and performance.

“You can’t just do the jumps or just have the physical strength and ability to do certain things — you have to also know how to interpret music and know how to put on a show,” Chen said.

Chen said another issue is the physical stress of the sport. Because skaters with smaller and younger bodies have an advantage in doing jumps, this can contribute to eating disorders and unnecessary stress for growing bodies.

There may even be pressure to dope, like what happened to Valieva, the first woman to land a quadruple jump in the Olympics. Valieva, a 15-year-old, tested positive for the banned heart drug and endurance enhancer trimetazidine during the 2022 Winter Olympics, yet still competed in the women’s program, a decision that caused uproar in the figure skating community.

Cummings said she was upset by the decision because it gave Valieva an unfair advantage over her competitors.

“I was blown away by (Valieva), and I know that I and other girls who figure skate look up to her,” Cummings said. “To find out she’s taking drugs is really disappointing because it kind of takes away her influence as an athlete, as the most important part of being an athlete is to inspire other younger athletes.”

“This is a very sensitive case, because it deals with not only a minor, but the entire system that caused the minor to be placed in a vulnerable position that she is in now,” Chen said.

Although figure skating has its flaws, the sport still attracts viewers and skaters alike, including Chen and Cummings.

“I probably have a bit more respect and appreciation for figure skaters just because I can understand how hard the things they do are,” Cummings said. “If a skater just barely lands a jump, I know how much muscle that took, and since I have also performed, I know how stressed they are, which makes it a lot more entertaining and impressive for me to watch.”

“I used to think, ‘Oh, I could probably do that spin or jump,’” Lengre said. “But when you do it yourself, you realize just how complicated it is.”

Though a lot of attention has recently been placed on figure skating due to the Olympics and its doping scandal, Cummings said she hopes for more consistent awareness of the sport.

“People kind of forget about figure skating until the Olympics roll around,” Cummings said. “I’ve had a lot of people tell me they don’t really consider it a sport, and it’s frustrating to know that figure skating doesn’t get all the appreciation and recognition that it really deserves.”