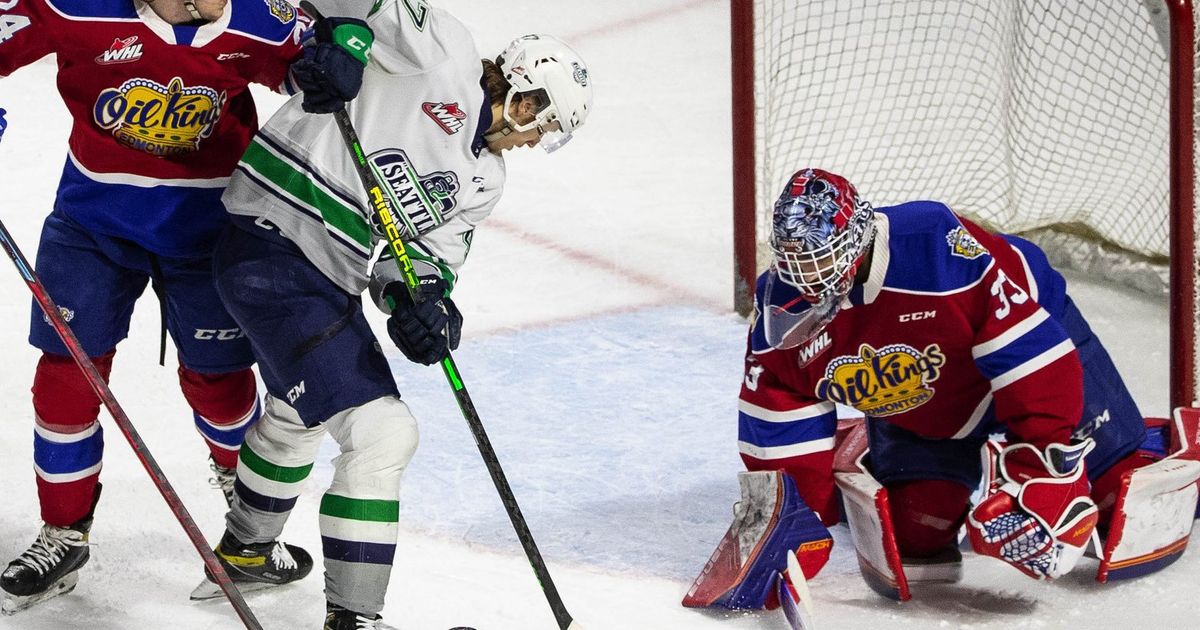 KENT — Less than five seconds away from overtime and another chance to tie the Western Hockey League championship series, the Seattle Thunderbirds instead find themselves on the brink again.

The Thunderbirds scored a pair of power-play goals Wednesday night in Game 4, and the score remained knotted at 2 until 4.7 seconds remained in regulation when Logan Dowhaniuk scored as the Edmonton Oil Kings blew out of Washington with a 3-2 win and a 3-1 series lead.

“It’s a heartbreaker. No other way to say it,” Thunderbirds coach Matt O’Dette said. “We have to regroup and get ready for the next game.”

The Oil Kings kept the puck barely but convincingly inside the blue line — “I watched it just after (the game) and it looked good,” O’Dette said — to avoid an offside call. As onlookers braced for the final buzzer and overtime, Dowhaniuk sent the puck sailing past Thunderbirds goaltender Thomas Milic.

Edmonton’s shins deserved some of the credit. The Oil Kings blocked three shots as the Thunderbirds sought their third power-play goal of the night with 2:40 left in regulation.

“I think we played pretty well. One of our better games this series,” said Thunderbirds center Jared Davidson, who scored for the home team. “I think we’ve got more. We’ve got to learn how to pull those games out and take it to overtime if we need to.”

They’re running out of time to learn that lesson, at least this season. The Oil Kings are headed home one win away from the championship.

The Thunderbirds trailed the Portland Winterhawks 3-1 in their second-round series before winning three consecutive elimination games. Seattle will have to win three on the road this time as Game 5, plus 6 and 7 if necessary, are all at Rogers Place in Edmonton. The Thunderbirds’ home arena, accesso ShoWare Center, is booked through next week and won’t host a potential Game 6.

Just over five minutes into the game and several seconds behind the play, Brendan Kuny skated into Thunderbirds captain Tyrel Bauer, who gave him a hard shove to the upper body. Kuny fell backward to the ice, where he was seen to for several minutes.

Kuny was stretchered off the ice in a neck brace. The crowd gave him a standing ovation. Bauer was handed a major penalty for interference and a game misconduct.

O’Dette said as it was explained to him, there was there was no choice but to call it a major because a player was injured. He thought it was incidental contact where perhaps the players didn’t see each other.

“Obviously you never want to see a player hurt like that,” the coach added.

With eight seconds left in Bauer’s five-minute major, Reid Schaefer went for a heavy hit in the corner, and the Thunderbirds’ penalty killers steeled themselves for another two minutes. Only three shots made it through to goaltender Milic (20 saves) during that long short-handed stretch.

Neither team eased up. The hits, shoves and occasional swings came in clusters the rest of the game.

“We needed to respond after last night, play a better game. I thought we did that,” O’Dette said.

Edmonton native Lucas Ciona scored his first of the series for the Thunderbirds on a first-period man advantage. Ciona made quick work of a rebound sitting in front of Oil Kings goaltender Sebastian Cossa (32 saves).

Edmonton alternate captain Josh Williams scored twice early in the second period, 2:13 apart and from similar spots. On the first a rebound spat slowly out to him and he turned and fired. From the same area near the hash marks to Milic’s right, he handed the Oil Kings a 2-1 lead.

Twelve seconds into a Thunderbirds power play, Davidson beat Cossa for his team-leading 13th goal of the postseason and tied the game at 2.

Kate Shefte: 206-464-8245 on Twitter: @KateShefte. Kate Shefte covers the Kraken and other Seattle-area teams for The Seattle Times.