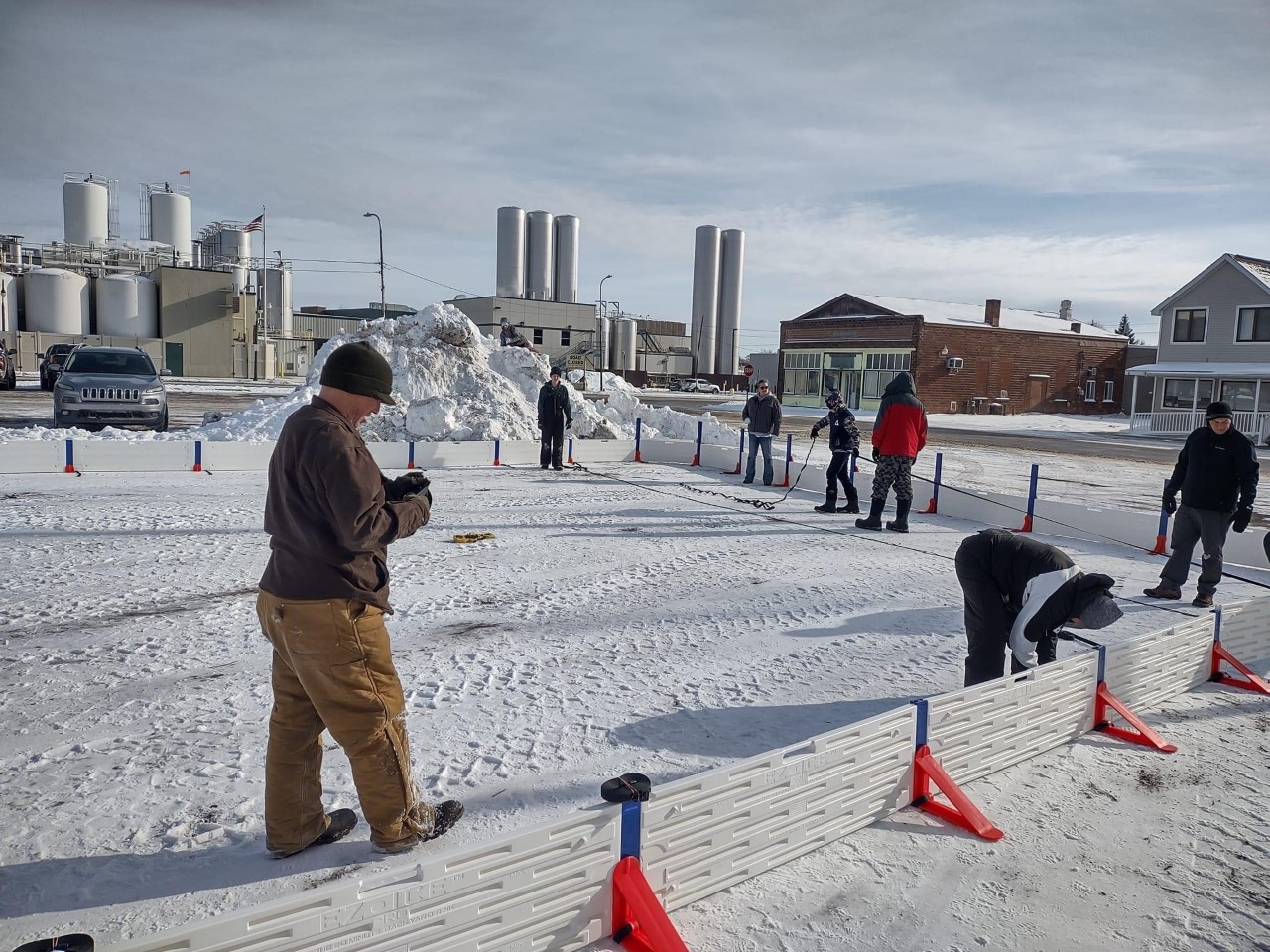 REED CITY — Around 24 volunteers came out to help construct the Reed City ice rink on Chestnut Street, next door to Pompeii’s Pizza, over the weekend.

“Our new city manager showed up, which was awesome,” Burchette said. “He and I were the first ones there and got things rolling. Then the others came through. We had a total of around 24 volunteers on site. I know there were others that wanted to help out, but unfortunately, it was short notice.”

In addition to the volunteers that helped constructing the rink, the department of public works cleared the snow from the area and removed all the piles of snow from plowing, and the Reed City Fire Department was on hand to fill it with water.

“It is up, the water is in it and it is freezing,” Burchette said. “Hopefully, shortly, we can get on it and start skating.”

Burchette said he doesn’t know how long it will take to freeze completely at around 15,000 gallons of water and cautioned everyone to remain off the ice until it is completely frozen.

“I went to look at it on Sunday and it was only about ½ inch frozen,” he said. “With the weather we are having, I am hoping that it will freeze fast, but that is a lot of water.”

He said he spoke with the police department about putting up some caution tape, but did not know if that had been done.

Burchette said, weather permitting, they are tentatively planning a grand opening celebration in the next few days to get people out to check it out and get their concerns addressed.

“I know some were concerned that it was going in the Pompeii’s parking lot,” he said. “It is not in the parking lot. We are not looking, in any way, shape or form, to take away from their business. We, as a city, have to respect the businesses, but at the same time, we have to start bringing things to the city. We have new stores coming in, new people are coming in, we need to have more activities for residents and visitors.

“This is an opportunity to keep people in the city,” he continued. “When they go to other places for those activities, that takes away from the city.”

Burchette said he and Guiles tried to get the ice rink in place last winter, but it didn’t go anywhere.

“This year, I wouldn’t let it go,” he said. “I have to give a shout out to Rich Saladin on that. He really stepped up and helped out. He started looking into it and got things rolling.”

If all goes well, Burchette said, next year they will look at adding some additional amenities.

“We talked about putting a cement pad down for next year so that it will be completely level,” he said. “That will depend on getting people to support and donate and getting volunteers out there to lay the cement pad.”

In addition, he said there is talk of providing heat to the pavilion, having extra skates on hand for those who need them, adding lights and piping in music.

“My vision is to have like a Hallmark movie scene,” Burchette said. “I want it to have that hometown feel, with lights running across it, and have a Christmas tree for Christmas. I mentioned looking into having Wi-Fi speakers where we can have music playing while people are there.”

He added that there is currently a large billboard behind the rink that they are considering using to advertise sponsors and donors.

A local group is also working to raise funding for installation of a splash pad in the area, and if that works out, Burchette said, they will consider making the skating rink a year-round activity.

“The splash pad group was talking about getting acrylic ice for skating,” he said. “I though if we could get that to match the size and shape of this rink, we can put it right on there for the summer and have year-round skating.”

Burchette said the city council is looking at ways to add more activities for residents and visitors.

The disc golf course has been in the works for about two years. If all goes well, it is expected to be completed this summer.

“That is kind of on hold until we can get the woods cleaned up,” Burchette said. “Right now, we are fighting mother nature. It might be spring before we can get that going again, and that, unfortunately, will put everything else behind.”

In addition, work continues to bring a dog park to the city, as well as the possibility of a splash pad and a community center.